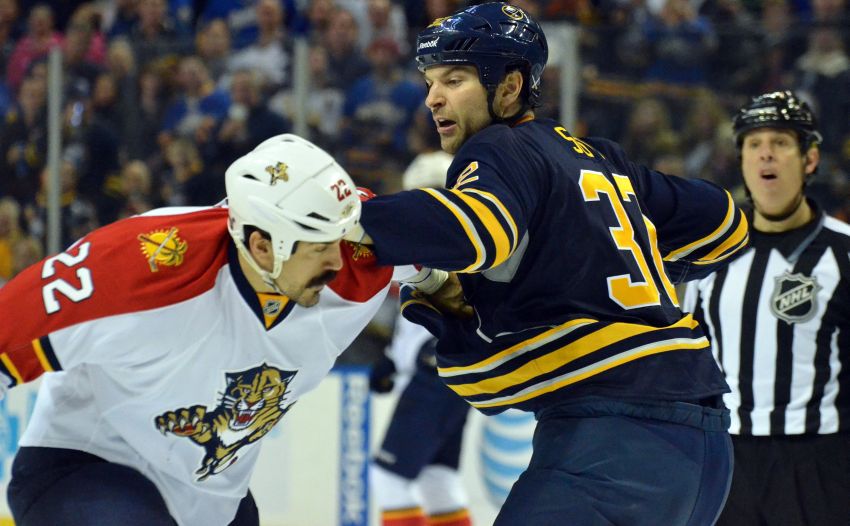 Sekera blocked Alexei Emelin’s shot shortly into his first shift Saturday, went to the dressing room and returned for several shifts before leaving the Sabres’ 6-1 loss in Montreal again after the first period.

“He took a pretty hard shot,” Ruff said inside the First Niagara Center prior to the game. “It depends. It could be day-to-day. It could be a little bit more.”

The Sabres began training camp with nine NHL defensemen before waiving Adam Pardy. Now, their depth has been whittled away. They’re down to just six healthy defenders.

The Sabres made one lineup change up front, inserting Nathan Gerbe and sitting Matt Ellis.

Cody McCormick, just back from a finger injury, fought Tyson Strachan in an entertaining first-period bout.

Faceoffs bit the Sabres again 8:36 into the game. Not only did they begin Sunday 30th overall, their 42.5 percentage ranked 3.8 behind 29th-ranked Columbus.

Twenty years ago Sunday, the Sabres made one of the biggest trades in franchise history, sending future 50-goal man Dave Andreychuk, goalie Daren Puppa and a first-round pick to Toronto for future Hall of Fame goalie Grant Fuhr and a fifth-round pick.

Florida winger Alexei Kovalev, who turns 40 years old on Feb. 24, is back in North America after a one-year KHL stint. The Russian has two goals and four points in eight games. He last played in the NHL in 2010-11 with Ottawa and Pittsburgh. Sunday was Kovalev’s 1,310 NHL game.

Sabres center Cody Hodgson had a goal and three points in his 100th NHL game.