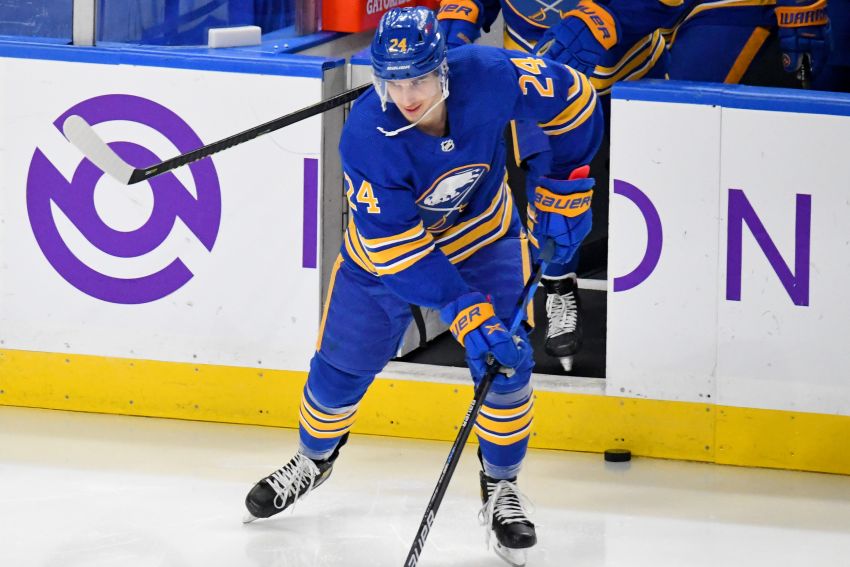 Dylan Cozens has moved back to center, his natural position. ©2021, Micheline Veluvolu

BUFFALO – Sabres rookie center Dylan Cozens has quickly reached another phase of his development, adding slick playmaking to his repertoire.

Since Cozens, 20, returned from an upper-body injury Sunday, he has recorded four assists, two more than he compiled in his first 25 games.

The 6-foot-3, 188-pound Cozens also pumped a career-high four shots on goal and generated a team-high 75% Corsi For, according to NaturalStatTrick.com.

The Sabres, who host the Pittsburgh Penguins this afternoon, eased Cozens into the lineup earlier this season, playing him at right wing instead of center, his natural position. They also occasionally scratched him so he could rest.

“There’s lots of responsibility playing center and I had just been coming on the wing learning the speed of the game and learning how to defend on the wing,” Cozens said on a Zoom call following Friday’s practice at KeyBank Center. “It was big for me to start and once I gained more confidence, moving to was center was good for me.

“That’s the position I want to play, so I’m happy to be there right now.”

Just 28 games into his career, Cozens has emerged as one of the Sabres’ top forwards, earning interim coach Don Granato’s trust. Cozens, the seventh overall pick in 2019, has played center almost exclusively under Granato.

“The first thing I wanted to do was just prove I can play at this level, show that I was responsible defensively,” Cozens said. “Once I kind of showed that I think I want to take the next step in my offensive game.”

Cozens has showcased rapid growth despite battling two upper-body injuries and testing positive for COVID-19. He has missed 15 total games.

“I’ve had a lot of things going on this season, but I’ve been able to watch a lot of games and just learn from watching,” said Cozens, who has scored four goals this season. “I’m happy where my game is at right now.”

“You can discuss something with him in between a period or show him a clip, and he can go out and change it immediately,” he said. “He doesn’t need three practices to do it.”

He added: “I don’t know if there’s any one big area (he has improved). It seems like every area that’s kind of a necessity or real key area to progress-development, he’s made incremental improvements.”

A slew of young players have improved under Granato, developing more confidence than they possessed under Ralph Krueger, who was fired March 17.

Defenseman Rasmus Dahlin, 21, has started dazzling with the puck again and making game-changing plays. Center Casey Mittelstadt, 22, has morphed into perhaps the Sabres’ top offensive threat. The list goes on.

Clearly, Granato has the Sabres playing to their strengths.

“These last few games for me have been a lot of fun and it’s been fun to watch the team over this last little bit.”

Cozens has spent the last two games pivoting Bjork, who was acquired from the Boston Bruins on Monday, and rookie Arttu Ruotsalainen.

“That pass from Cozens was great,” Bjork said following the game. “He’s a workhorse, as the other guys kind of say. He found that puck and put it right on my tape and I was able to get a quick shot off.”

Cozens’ line generated a team-high 69.2 Corsi For, according to NaturalStatTrick.com.

“Our chemistry has been really good,” Cozens said of his line. “Bjorkie’s been great. He works so hard hunting the puck down, and Arttu’s so smart with the puck and making plays. It’s been great playing with those two guys. We’re a confident line right now.”