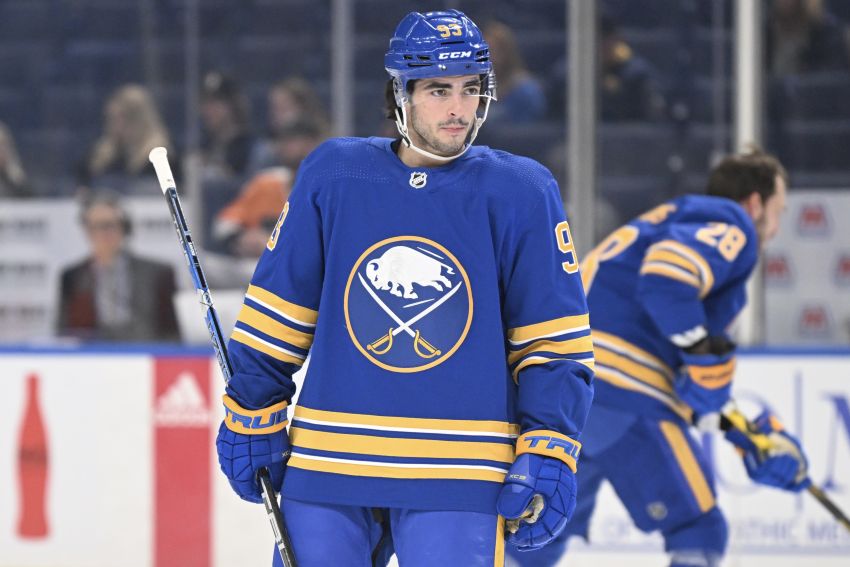 BUFFALO – In the end, chances are the Sabres will assign center prospect Matt Savoie to his junior team before their season opener on Oct. 13.

Savoie, having established himself as one of the Western Hockey League’s elite talents, will join the Winnipeg Ice and almost certainly enjoy a dynamic season.

In the meantime, Savoie, the ninth overall pick this year, has an opportunity to keep impressing the Sabres.

Savoie, 18, is the only junior player left on the Sabres’ 55-man training camp roster.

Coach Don Granato wants to award Savoie, who has played two of the first three contests, at least one more preseason game. The Sabres have three remaining, starting with this afternoon’s contest against Pittsburgh Penguins at KeyBank Center.

“I like what I’ve seen out of Matt,” Granato said Friday. “He has gotten better every day and he can keep the pace pretty good. … We feel Savoie has earned (the right) to stick around. I want to see him as the pace picks up as well.”

Savoie, of course, has never experienced a pace as fast as the NHL. As camp progresses, it will only get higher.

“I like that,” Savoie said of the pace ramping up. “I like to continue to move forward and continue to get better. I think it’s definitely a big challenge out there.”

“There’s so many things to be excited about,” Granato said. “I think the more experience we can immerse him in while he is here, the better and faster he will acclimate.”

The 5-foot-9, 170-pound Savoie has acclimated so quickly that he centered Casey Mittelstadt and Kyle Okposo, two established players, in Tuesday’s 2-1 home win over the Philadelphia Flyers.

But besides his array of slick talents, Savoie’s maturity has helped him earn a long look from the Sabres.

“His interaction with the older players, I know the older players have been impressed,” Granato said. “They enjoy playing with him, having him on their line, and that absolutely is an indication he’s got a certain degree of maturity. He knows what’s expected of him probably better than most kids his age. He knows what his skill set is and how that can be imprinted within a practice or a line that I put him on better than players his own age.

“So, yes, he absolutely is here longer because he has shown greater maturity combined with his skill.”

Through his first two exhibition outings, Savoie has recorded zero points and one shot on goal while averaging more than 13 minutes of ice time.

“(I’ve noticed) the limited time and space out there,” he said. “It’s a really fast game. You don’t have much time with the puck.”