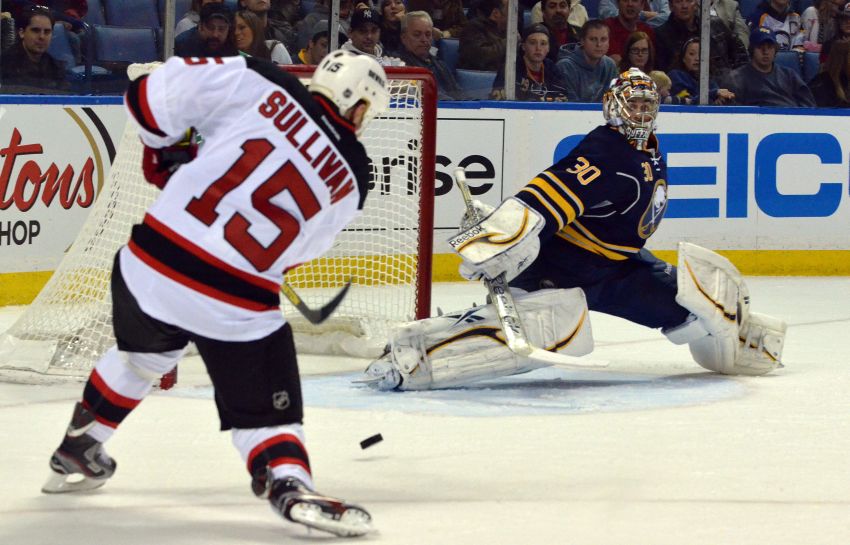 BUFFALO – Not long ago, the Sabres might’ve wilted under the intense pressure, lost a game like Sunday’s 3-2 shootout win over the freefalling New Jersey Devils.

For at least 15 minutes – from late in the first period until midway through the game – the Devils hemmed the Sabres in their own zone, pumping chance after chance on goalie Ryan Miller as they sustained almost constant pressure.

It looked like the reeling Devils enjoyed a marathon power play.

The 18,703 fans inside the First Niagara Center responded accordingly, booing and moaning throughout the Sabres’ wretched stretch.

“But the encouragement we can get when we’re in a tight game, that can help for some of these young guys.

Occasionally, when the Sabres cleared the zone, the crowd serenaded them with Bronx cheers.

“That’s the way it’s been since I’ve been here,” interim coach Ron Rolston said about the crowd’s reaction. “We understand … our job is continue to do what we can do to change that.”

By the end, when Nathan Gerbe’s shootout goal and Miller’s glove save on Travis Zajac secured a third straight win, the Sabres had shifted the atmosphere dramatically, bringing the roaring crowd to its feet.

Was Sunday a survival test?

“Resilient is basically what it was,” Rolston said.

Sabres winger Patrick Kaleta, who scored his first goal this season, added: “We got to get those lulls out of the game.”

Nonetheless, the Sabres got through the lulls, grabbing the lead from Steve Ott’s goal 13:44 into the second period. Mark Fayne’s short-handed score 5:46 into the third period tied it.

Two more points crept the Sabres up one spot to 11th place in the Eastern Conference, four points behind the eighth-place New York Islanders (42-38).

Miller doesn’t care how the Sabres won, an attitude he’d like the home crowd to embrace.

“We’d appreciate it if they hang around, stay for the whole game, be excited, have fun,” said Miller, who made 37 saves. “We’re trying our hardest out there. You saw some sacrifice out there. You saw some good hockey. I would be proud if I were from Buffalo to say, ‘My Sabres won that game.’ That’s the kind of game you’re going to have sometimes.

“We’re going to try to clean it up so it’s a little prettier. But if it’s going to be like that and we get two points, I don’t really mind.”

“I’ve been saying for years my role model was (former Sabres captain) Michael Peca because he could do anything you asked him to do,” Kaleta said. “I’m not quite there yet. I don’t know if I’ll ever be. But it’s something I try to take pride in being a well-rounded player.”

“I said, ‘Old man, it’s about time you hit me there,” Kaleta joked about the 35-year-old Hecht.

Scott, who thumped David Clarkson in the second period, played a season-high 9:11.

“They battle and give you everything they have,” Rolston said.

Steve Sullivan’s power-play goal tied it at 18:20, the early stages of the Devils’ dominance.

“Yet our fans were booing us on every opportunity,” said Ott, who had 10 of the Sabres’ 44 hits. “Those kind of things are disappointing in a sense that we created momentum from having a hard-working defensive zone shift, catching it on the offense, scoring big goals, timely goals, and those are the ones that win you games.”