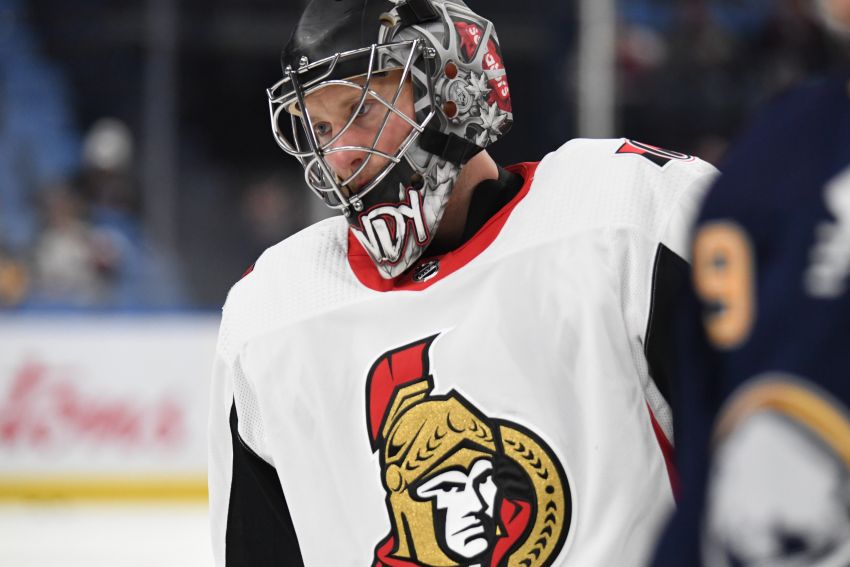 Fifteen days during the 2005-06 season altered the path of Craig Anderson’s career.

During that uncertain stretch, Anderson pinballed around the NHL, getting plucked off waivers three times. He bounced from the Chicago Blackhawks to the Boston Bruins and St. Louis Blues before returning to Chicago.

The experience taught Anderson, who signed a one-year contract with the Buffalo Sabres on July 28, the fleeting nature of an NHL goalie’s career. He learned he was too content and needed to showcase a higher level of dedication on and off the ice.

If Anderson did not change, he understood he could easily be replaced and spend the rest of his career toiling in the minors.

Today, Anderson, 40, is the NHL’s oldest goalie and the early favorite to be the rebuilding Sabres’ starter this upcoming season. The genesis of his remarkable longevity – 654 games over 18 seasons – can be traced to his regular appearances on the waiver wire from Jan. 19 to Feb. 3, 2006.

“My main lesson in my career was … never be satisfied,” Anderson said on a Zoom call Thursday. “It took me a while to figure that out, even down to summer workouts. Are you doing enough or are you doing more than enough to make sure you’re ready to go? If you’re doing the bare minimum, that’s what you’re going to get.”

Anderson wants to relay those experiences and impart his wisdom to the other goalies in the Sabres organization, including top prospect Ukko-Pekka Luukkonen.

“I had to go through some hurdles of playing poorly, going back to the minors, just being happy to be in the league, which sent me back down to the minors,” Anderson said. “So there’s lots of stepping stones in my career that I don’t want to see these other guys make the same mistake. …

“It was practice habits, it was mindset, it was just being satisfied, and that is a problem to be a professional athlete, of being satisfied. You’ll be out.”

How rare is a player as old as Anderson? He will be the Sabres’ first 40-year-old since defenseman Teppo Numminen in 2008-09.

Naturally, Anderson acknowledged retirement has crossed his mind. Last year, he said he and his wife, Nicholle, decided “if something happens, it happens.”

In January, he parlayed a tryout in the Washington Capitals’ training camp into a one-year contract, and spent much of the season on their taxi squad.

When free agency opened July 28, Anderson figured he would be waiting a while to see if he could play again. But shortly after losing No. 1 goalie Linus Ullmark to the Boston Bruins, the Sabres offered Anderson a deal for the league minimum of $750,000.

He lasted less than 10 hours on the open market.

“It was kind of unexpected,” Anderson said of the contract. “We were kind of not expecting anything to kind of happen right off the bat (in) free agency. We were kind of waiting to see where the dust would settle, the goalie carousel that was going on.”

Aaron Dell, who signed a one-year deal minutes after Anderson, or Dustin Tokarski will likely be the other goalie in Buffalo. If the Sabres feel Luukkonen has showcased enough development, he could graduate from the Rochester Americans at some point during the season.

Anderson has proven he can handle any type of workload. He played a career-high 71 games with the Colorado Avalanche in 2009-10 and made 50 or more appearances five times during his successful 10-year run with the Ottawa Senators.

With Washington, however, Anderson was mostly a spare part, playing only four regular-season games and starting just twice. After earning his first nod Feb. 21, he did not start again until May 8.

Still, Anderson performed well in limited action, compiling a 2-1-0 record with a 2.13 goals-against average and a .913 save percentage.

When goalies Ilya Samsonov and Vitek Vanecek suffered injuries in the playoffs, the Capitals utilized Anderson, who won one of his two appearances while posting a .928 save percentage.

To seize his sporadic opportunities last season, Anderson said he drew on his past experience as a backup and developed a new mindset. He also tried to use practices as his games.

“It was a good mental battle,” Anderson said of trying to stay sharp. “I think I’ve learned over my career how to be ready, how to stay ready. I went through in my younger playing days of being the backup, not playing a whole lot. Then when you get your opportunity, you fail and then you get sent down.

“I’ve kind of learned from those experiences, and that’s the experiences that I was kind of able to go off of and allow myself to play well when called upon.”