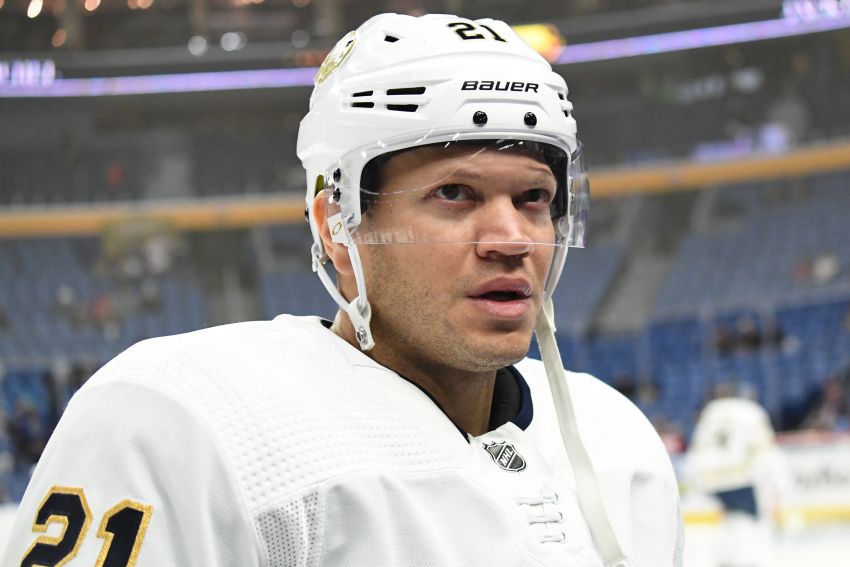 Last year, Kyle Okposo and his family decided to sell their home in Minnesota and make Clarence their permanent residence. The roots he laid down in Buffalo have helped the veteran winger develop a unique understanding of how the Sabres’ stunning run of futility has disenchanted a passionate fan base.

“I understand the weight of the team that’s on the city, and I get it, because I now live here full time,” Okposo said on a Zoom call Wednesday. “I talked to a lot of people, I’ve become friends with a lot of different people, and I know people are (ticked). I know people are mad and they want to win. We want to win, too.”

Okposo spoke a day after the COVID-19 pandemic forced the NHL to cancel the rest of the regular season, officially ending the Sabres’ rough 2018-19 campaign. Another win would’ve earned them a spot in the 24-team qualifying round the league plans to utilize if it can resume play this summer.

“It’s tough to be here in Sweden when all my Swedish buddies are going back and playing and I’m staying here at home,” Sabres defenseman Rasmus Dahlin said. “It (ticks) me off a little bit actually to not play now.”

The Sabres joined some dubious company, becoming just the fifth team in league history to miss playoffs for nine straight seasons. Another postseason DNQ will tie them with the Edmonton Oilers and Florida Panthers for the longest drought ever.

Remember, before this current streak, the Sabres had never missed the playoffs more than three consecutive seasons.

There aren’t many good feelings surrounding the Sabres these days, and rightfully so. The once-proud franchise has transformed into a laughingstock, seemingly bungling every move.

Still, Okposo sees positive changes taking place. He understands fans might think he’s full of it, but he believes the Sabres can snap out of their marathon funk.

“Things don’t happen overnight, especially when there’s a lot of history and there’s a lot of things that need to go in the right direction, but we are going in the right direction, and I think that’s the message I have for fans,” he said. “And obviously there’s going to be a lot of people that are going to say, ‘I don’t want to hear that, I want to see results.’ And I understand that, too.”

“He’s only going to continue to grow in that leadership role, and he’s done that,” he said. “He demands a lot out of teammates, out of everybody, because he puts in everything he’s got.”

“His attitude is pretty infectious,” Okposo said. “It would be a tough thing not to get motivated when he’s speaking, and his messages are extremely clear and concise.”

“It was a system that wasn’t complicated, it didn’t take a lot to figure out,” Okposo said. “But it required a buy-in from everybody, and if there was a weak link in the chain, it didn’t work. So five-on-five, it was something that when everybody was on, everybody was sharp, it was very suffocating for teams. …

“That’s probably the biggest impact Ralph had on us, is just our play without the puck and causing everybody to buy-in.”

But the Sabres’ success was fleeting. That’s why this offseason could be general manager Jason Botterill’s final opportunity to remake the Sabres into a playoff team.

“I have to continue to build this organization to be strong at all levels – whether it’s Rochester, whether it’s Buffalo, whether it’s goaltending, defense, forwards,” said Botterill, who took over as GM prior to the 2017-18 season. “It’s imperative that we get stronger in these spots. I think we’re on the path to doing that, but it’s important that continues to grow however long this offseason is, and I think we’re going to have an opportunity to have some flexibility from a contract standpoint.

Okposo knows that at 32, he’s running out of chances to win the Stanley Cup. He hasn’t played in the postseason since 2016, his final season with the New York Islanders. He left the Islanders because he felt the Sabres were closer to contending for a championship.

So far, Okposo has only heard what it’s like to experience the playoffs in Buffalo.

“The people of Buffalo are so passionate about their sports teams,” he said. “It really is fun for me to play in a market like this. I want to see that passion carry over into a playoff run. I talk to (former Sabres captain Jason Pominville) quite a bit. You can see the hair on his arm stand up when he starts talking about the playoffs and the runs that they had.”