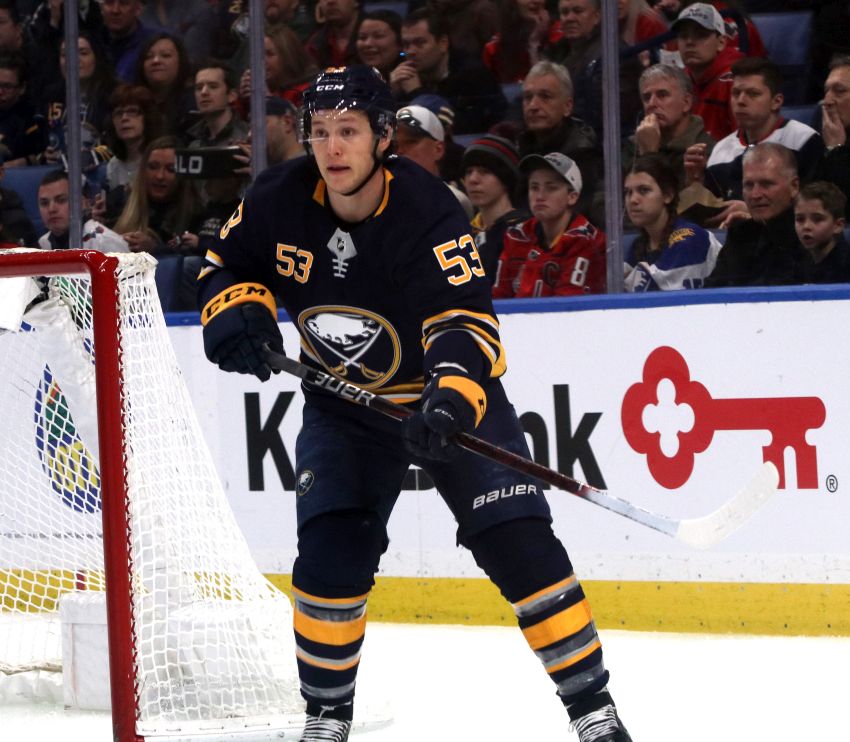 BUFFALO – Forget about Jeff Skinner scoring 50 times. Thanks to a four-week slump, the Sabres winger might fall short of the 40-goal mark.

After scoring twice on Feb. 15, Skinner was producing at a 52-goal pace over a full season.

But Skinner been stuck on 36 goals for 27 days. The NHL All-Star has a 12-game goal drought entering tonight’s game against the Pittsburgh Penguins at KeyBank Center.

Skinner, however, hasn’t stopped generating offense. He has recorded 37 shots on goal over his drought and constantly buzzed around the net.

Basically, Skinner has kept doing many of the things that made him so successful earlier this season. He has just lacked finish.

While Skinner has only registered four shots in the last three contests, he hit the post twice in Tuesday’s 2-0 home loss to the Dallas Stars.

Like all scorers, Skinner can be streaky. He closed the 2014-15 season without scoring in 18 straight games, his longest streak ever. Last year at this time, he was in the midst of a 13-game goalless stretch.

To Sabres coach Phil Housley, Skinner, who has five assists during his drought, has recently been snakebitten.

“It’s going to come for him,” Housley told reporters Wednesday. “It’s just at this point, since he hasn’t scored in a long time, it gets elevated, but he’s still getting the looks. He hit two posts (Tuesday). So he’s got to continue to just find ways to create.”

Not surprisingly, the Sabres, who have been blanked in the last two games, have fallen apart without Skinner’s offense. They’ve lost five straight games (0-4-1) and have won just twice (2-8-2) during his slump.

Skinner has scored 19 percent of the Sabres’ 190 goals. His main setup man, captain and leading scorer Jack Eichel, will serve the second and final game of his suspension tonight for an illegal check to Colorado Avalanche forward Carl Soderberg’s head.

Without Eichel, Housley got creative putting together his lines Wednesday, placing Skinner at left wing beside center Vladimir Sobotka and Jason Pominville.

Sobotka has compiled 12 points this season and zero assists in his last 18 games.

Nylander, 21, made his season debut Tuesday.

Sabres defenseman Zach Bogosian, who left Tuesday’s loss after the second period, is day-to-day with an upper-body injury, Housley said.

Bogosian did not practice Wednesday.