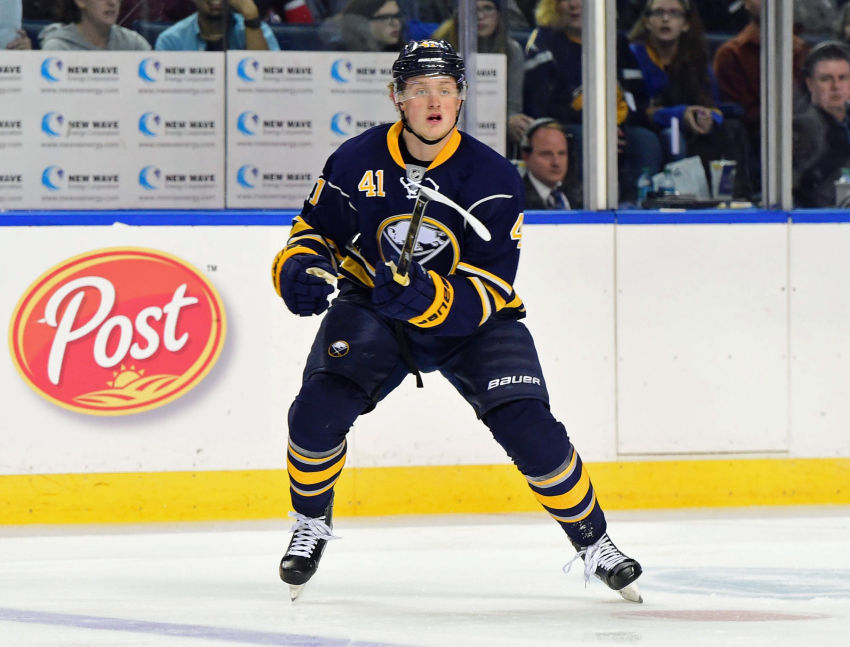 BUFFALO – When Sabres coach Dan Bylsma spoke to center Jack Eichel this morning, the two chatted about the phenom’s first NHL training camp and where his game was at a day before his debut.

Bylsma then informed Eichel, 18, he had made the Sabres, something the rookie had been waiting to hear.

“Then I asked him if he wanted to switch from 41 to 15,” Bylsma said inside the First Niagara Center. “Obviously, the season’s starting to today. I told him he was going to be with the Sabres starting today and (asked) whether he wanted to change from 15 to 41.”

Eichel, who has been wearing No. 41, a camp number given to him, picked No. 15 in July. He refused to wear it, however, until he had officially made the team.

The second overall pick in June will change his number reluctantly, Bylsma said.

Check back later for more on Eichel’s debut Thursday against the Ottawa Senators.

In other news, captain Brian Gionta developed a lower-body injury at the end of practice Tuesday and sat out today. He’s day-to-day and questionable for the Senators. Sam Reinhart subbed for him on the right wing beside Eichel and Evander Kane today.

“I like the possibility of Evander, Jack and Sam on the same line if that’s what we end up going with tomorrow,” Bylsma said.

Meanwhile, defenseman Josh Gorges, who missed most of the preseason with a lower-body injury, practiced again today and plans to play Thursday.

One thought on “Sabres’ Jack Eichel ready to switch to No. 15”