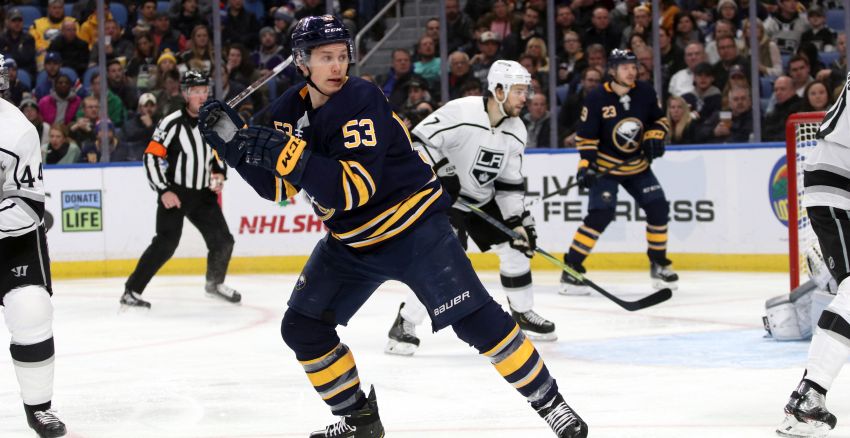 BUFFALO – So what do the reeling Sabres do now?

While their roaring third-period comeback helped them earn a point Thursday, they still lost 6-5 in overtime, allowing the Carolina Hurricanes to pass them in the standings.

Having lost seven of the last 10 games, the Sabres have dropped to 10th in the Eastern Conference and five points out of the final playoff spot. The same team that ranked first overall in late November could fall out of the postseason chase if it doesn’t start stringing together some wins.

The Sabres have been downright awful defensively over that wretched stretch, allowing four or more goals eight times.

Right now, the Sabres look like a team experiencing a crisis. Coach Phil Housley and his players sound frustrated, even angry. Housley has been stressing the defensive aspect of the game, yet there has been virtually no response.

“Too many mistakes,” Sabres winger Sam Reinhart said. “We can’t expect to win hockey games 6-5, 7-6. We need more from our goalies and we need it from the start of hockey games. It’s frustrating.”

Of course, Reinhart isn’t known for controversial statements. Perhaps he misspoke. Goalie Linus Ullmark has consistently bailed the Sabres out.

Reinhart surely knows even the best goalies will repeatedly get burned if their teammates keep breaking down defensively.

“We’ve all got to realize that we’ve got guys who are capable of making plays when we need to offensively,” Reinhart said seconds later. “And with that being said, we need to have more respect for our own end. We need to all come back and pick up guys.

“If your shift calls for defending their guys, their top guys, that’s what you’re expected to do and we need more out of everyone in that regard.”

Like last week, Housley talked about having “respect” for your own net.

“The five of the six goals come right in front of our own net,” Housley said. “That’s the one thing players from our opposition should be very wary of going into. No. 1, we got to be tougher to play against. We got to start pushing guys out, boxing guys out, have a fear that if something gets into that area, there’s not going to be the looks that this team had tonight.”

He added: “It’s just those things that are very fixable, it’s just that decision that you have to make as an individual to do the right thing.”

Why isn’t Housley’s message sinking in?

“I don’t know, no answer for you, not a clue,” said Sabres center Evan Rodrigues, who scored his career-high eighth goal.

How long can the Sabres go like this? They’ve given up a whopping 17 goals over the first three contests of their seven-game home stand.

Do the Sabres need to decide if their current defense corps can keep playing?

“Those things are very fixable. The defensive part of our game, for the most part, our checking detail coming back into our zone was really good.”

The Sabres nearly pulled off an unlikely win thanks to two goals in the final minutes of the third period. Less than a minute after Nino Niederreiter put Carolina up 5-3, Sabres defenseman Marco Scandella scored at 15:41, igniting what remained of the crowd of 17,588 inside KeyBank Center.

Sabres winger Jeff Skinner, a former Hurricanes star, tied it at 19:04, his second goal of the night and team-high 33rd of the season.

But Teuvo Teravainen’s second goal 3:25 into overtime, a breakaway that materialized after Sabres captain Jack Eichel missed the net and the puck caromed around, sealed the tilt.

“You can’t get three guys caught deep,” Rodrigues said. “One guy’s got to stay back.”

Incredibly, the Sabres have lost eight straight games to the Hurricanes (0-5-3). They haven’t beaten them since March 22, 2016.

2 thoughts on “Sabres growing frustrated after overtime loss to Hurricanes”