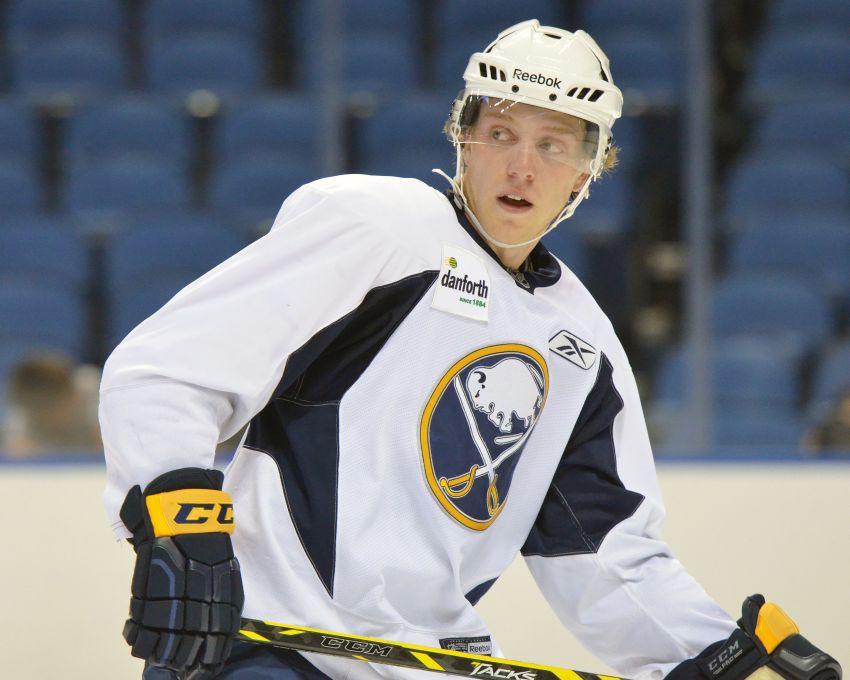 When forward Drake Caggiula visited NHL teams as a free agent in 2016, he said he felt some loyalty to the Buffalo Sabres.

Two years earlier, the Sabres had given the undrafted Caggiula a chance to attend their summer development camp following his sophomore season at North Dakota.

“They gave me my first opportunity,” said Caggiula, who was claimed on waivers Friday by the Sabres.

Caggiula, 26, nearly chose the Sabres five years ago – “I was pretty close,” he said – before he signed his entry-level contract with the Edmonton Oilers.

“It’s pretty funny how you come full circle, though, and you end up here now,” Caggiula said on a Zoom call Wednesday.

Caggiula has bounced around over the last two and a half years, playing for three teams: the Oilers, Chicago Blackhawks and Arizona Coyotes.

After signing a one-year, $700,000 contract with the Coyotes, Caggiula compiled one goal and seven points in 27 games before they waived him. He said he couldn’t capitalize on a slew of early-season scoring chances and lost some confidence.

When the 5-foot-10, 176-pound Caggiula returned from hamstring injury in early February, he said he couldn’t regain his rhythm and started getting scratched.

“I wasn’t upset about the way I was playing, it’s just one of those things that I could always be better and I always want to be better,” Caggiula said.

The Sabres, who need forward depth, could give Caggiula a long look over the final two weeks this season after he completes his quarantine.

“This is definitely an opportunity for me to step in and showcase what I’m capable of doing,” Caggiula said.

Caggiula flew commercial to Buffalo, so he must follow the NHL’s COVID-19 protocols. He won’t play in Thursday’s road game against the Washington Capitals. He said if he tests negative on Saturday, he can join the Sabres on Sunday.

While the Sabres host the Pittsburgh Penguins that afternoon, he will likely make his debut later next week.

The Sabres and interim coach Don Granato clearly offer Caggiula some comfort. He knows Granato well, having spent a half season with him in Chicago.

“Anytime you have a coach that you’ve had a relationship with and can go to bat for you, I think that goes a long way,” Caggiula said.

When Granato has spoken to Caggiula over the past several days, he said their conversations have been “easy.”

“We have a prior relationship and in a very competitive environment in our prior relationship, so that helped,” said Granato, who was an assistant with Chicago in 2018-19. “He knows and knew then how much I believed in him when we were together in Chicago and it’s no different here.

“I’m very excited to get him in the lineup and get his game going because he can bring a lot of energy, feistiness, grit and speed.”

Caggiula said he remembers the energy Granato possessed on and off the ice.

“If I made a big hit or blocked a shot or scored a goal, he was always one of the first people to come running down the bench and give you that positive encouragement,” he said. “I think that really goes well for me. I like having feedback – good or bad. I think that communication is big thing.”

He added: “Just speaking to him earlier this week about the style the team wants to play, I think it’s really going to benefit the way I play the game. I’m really looking forward to getting started.”

Granato said last week, Caggiula, a natural center, will likely be utilized at wing. Caggiula can play anywhere up front and possesses the skill to skate up and down the lineup.

He said he believes that versatility helped him reach the NHL and stay in the big leagues.

“I played center for my first year or so in the NHL, I played center all the way up until the NHL,” he said. “And I think once you play center, you kind of understand how to play all the other positions. Throughout my time in the NHL I played left wing, right wing, first line, fourth line – everything in between – power play, penalty kill.

“So it’s one of those things where growing up I was put into those situations all the time and I think I just really learned how to play in those types of situations and playing with star players and playing on the fourth-line role.”