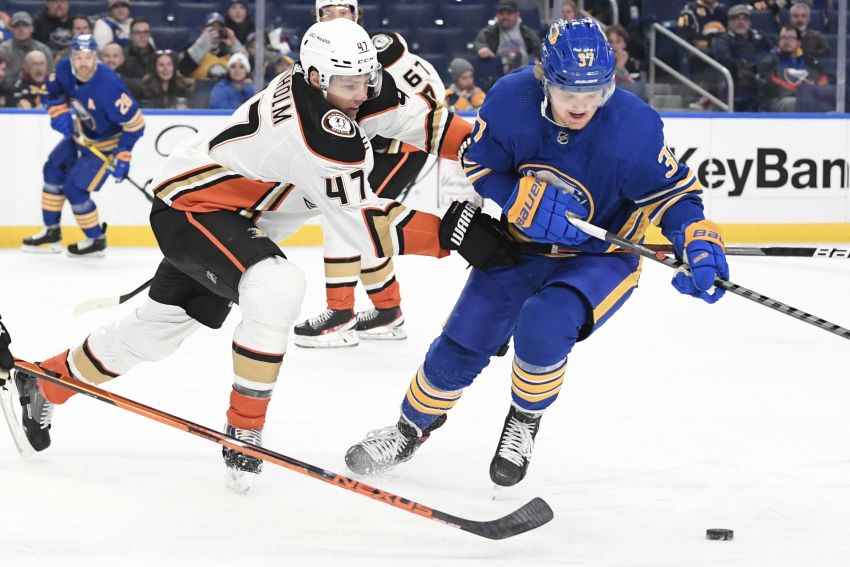 BUFFALO – Center Casey Mittelstadt, who underwent surgery Dec. 10 to repair an upper-body injury, skated with the Sabres this morning and could play Saturday afternoon or Tuesday, coach Don Granato said.

“Big thing is to get him integrated in practice, see where he’s at,” Granato said following Mittelstadt’s first skate with the team getting hurt Dec. 7.

Mittelstadt, 23, has endured a frustrating season, playing just four games. After suffering an upper-body injury opening night, he missed the next 21 contests. Then in his third game back, he sustained another upper-body injury and has been sidelined the last 14 games.

The Sabres, who host the Dallas Stars tonight, have a lot of injuries. Granato provided some updates this morning after the Sabres released their injury report.

– Winger Kyle Okposo is week to week after suffering an upper-body injury when Erik Brannstrom knocked him into the boards in Tuesday’s 3-1 win over the Ottawa Senators.

“He’ll plow through this I’m pretty certain pretty quick,” Granato said. “But he’s dealing with some bumps and bruises from the game the other night that need to be worked their way out.”

Granato said Okposo, who has a scary history of head injuries, doesn’t have a concussion.

“You know what he goes through or has gone through,” he said. “That was a hold your breath moment, I think, for lots of people there.”

To replace Okposo, the Sabres this morning reassigned prospect Jack Quinn from the Rochester Americans to the taxi squad. Quinn, 20, will be elevated to the active roster later today and play his second NHL game tonight.

Quinn, a winger, has scored a league high 18-goals with the Amerks.

– Granato said goalie Malcolm Subban will likely miss the rest of the season after undergoing surgery to repair an upper-body injury he suffered Jan. 11. Subban, 28, has missed the last four games.

– Granato said defenseman Colin Miller will be out at least six weeks after undergoing surgery to repair an upper-body injury. Miller, 29, has missed the last two games.

– Granato said winger Vinnie Hinostroza will be out a minimum of three weeks with an upper-body. Hinostroza, 27, has missed one game.

Meanwhile, Mittelstadt, of course, is champing at the bit to play.

“You come back, you get hurt right away again,” Mittelstadt said. “It’s not a good feeling. You’re so excited to be back and finally have the adrenaline of playing and being around the guys, then it gets taken away from you. I think it puts things into perspective.

“Sometimes you get stuck during the year and you’re playing so many games and you’re like, ‘Oh, my gosh, playing again, playing again,’ but then, man, when you don’t get to play, it’s hard. It (stinks). I’d be lying if I said it didn’t (stink). Different perspective from that and, obviously, I know now to not take it for granted.”

The Sabres did not have any line rushes this morning. Quinn skated on the first power-play unit. Granato said Quinn will skate on one of the top two lines.

Quinn has been on a tear in Rochester since returning from his one-game stint with the Sabres, compiling six goals and nine points in four games. He scored four times in Saturday’s 6-5 loss to the Belleville Senators. He also scored in Wednesday’s 3-2 overtime loss to the Syracuse Crunch.

“He is doing exceptionally well in Rochester,” Granato said. “Obviously, statistically that’s shown, we’ve seen. He’s doing what he can do and should do as a top talent. So that’s exciting. Yeah, he’s putting himself in a good spot. Definitely.”

Update: The Sabres late this afternoon sent winger Brett Murray to the Amerks and officially recalled Quinn from the taxi squad.