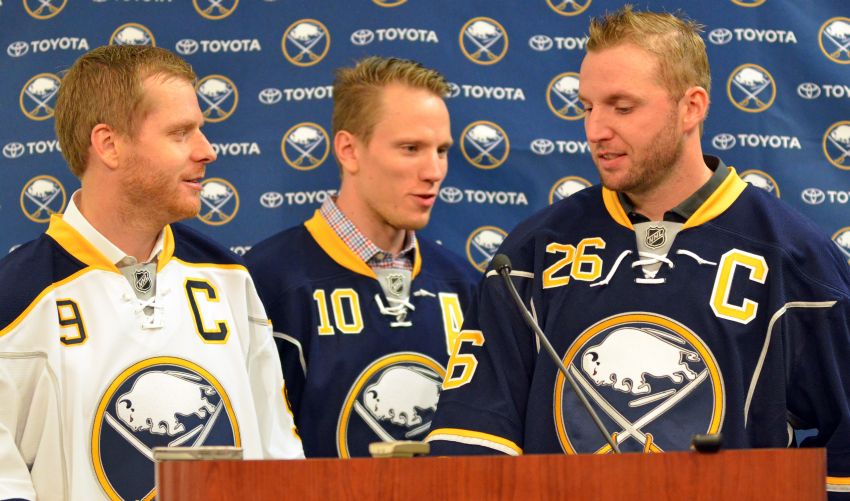 BUFFALO – Shortly before noon today, the Sabres hurriedly left the First Niagara Center ice following practice and walked to their dressing room. The metal door quickly closed after all the players had entered.

Cheers emanated from behind the door a few minutes later. More applause could be heard shortly after that.

In a surprising move, Rolston had named Steve Ott and Thomas Vanek co-captains.

“We just thought both guys represented what we wanted; nothing more, nothing less than that,” said Rolston, who also named Christian Ehrhoff an assistant captain. “It’s all about the influence they have on the team. Those guys are big influences on the team.”

In naming Ott and Vanek, Rolston picked two players with different personalities and backgrounds to lead. The loquacious Ott, who debuted here in January, constantly plays on the edge. The homegrown Vanek, one of the Sabres’ top talents since 2005, is more subdued.

Both, however, are accountable and respected.

Vanek said the honor won’t change the way he plays.

“I’m not the most rah-rah guy, but I think when I got something to say, I’ve always said it, and that will continue,” he said.

“We wanted the best influence on our young players,” Rolston said. “Thomas has been a big influence on this organization for a long time. He knows how it ticks. He wants to have a great year and he also wants to be really good in camp helping the young guys, whether it’s on the bench or in the room.”

Ultimately, Vanek said, the captaincy won’t influence if he re-signs with the Sabres.