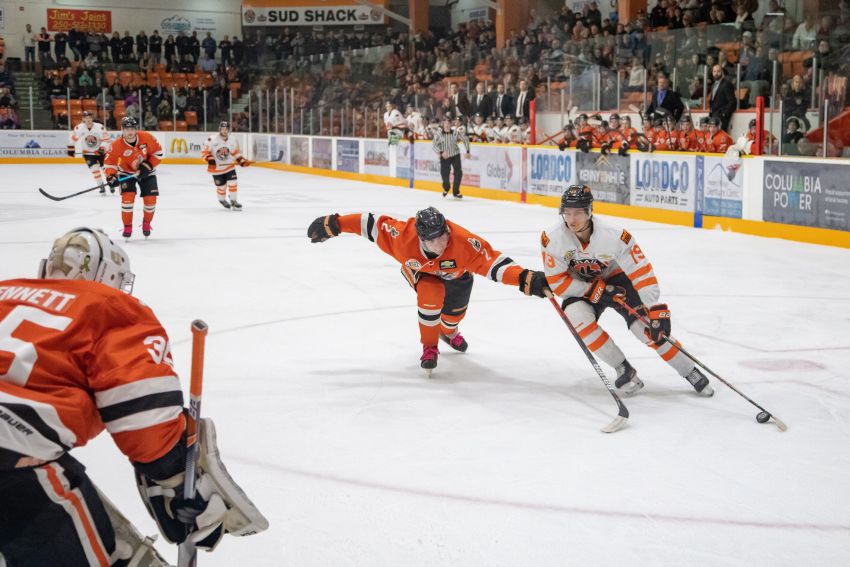 Barely a year before Jeff Tambellini would start coaching Kent Johnson, he was introduced to the ultra-talented forward during a summer skate in 2017.

Some pro hockey players from Vancouver would occasionally invite teenagers from the local Power Edge Pro training group to join them. So Tambellini, then a 33-year-old preparing to possibly play his 14th pro season, found himself on the same ice as Johnson, a skinny 14-year-old from nearby Burnaby, British Columbia.

Even among all the established talent on the ice that day at Britannia Rink – NHL stars Ryan Nugent-Hopkins and Morgan Rielly also skated – Johnson “put on quite a show,” according to Tambellini.

Johnson’s myriad talents wowed Tambellini. He watched Johnson make difficult puck-handling decisions and movements look easy. He was deceptive and so light on his edges he could quickly change direction.

“He made the pros look pretty silly with the ease that he went through a lot of the drills,” said Tambellini, who retired that year and coached Johnson two seasons with the junior Trail Smoke Eaters, starting in 2018-19.

Fast forward to today, and Johnson, just a few months removed from a dynamic freshman season at Michigan, has developed into a prized prospect with a penchant for scoring highlight-reel goals.

NHL Central Scouting ranked him third among North American skaters for the 2021 draft. He will likely be among the top selections July 23.

The Buffalo Sabres, of course, own the first overall pick. The league’s worst team sorely needs help up front. But even if the Sabres draft Michigan defenseman Owen Power, Central Scouting’s No. 1 prospect, Johnson could be an option for them later.

The Sabres will almost certainly be making major moves soon, meaning captain Jack Eichel, center Sam Reinhart and defenseman Rasmus Ristolainen could be traded. Those players might fetch the Sabres another high draft pick this year.

The 6-foot-1, 167-pound Johnson, who can play center and wing, could be too enticing to pass up if the Sabres get a second crack at him.

After scoring 41 goals and 101 points in 52 games for Tambellini’s British Columbia Hockey League team in 2019-20, Johnson recorded nine goals and 27 points in 26 contests for the stacked Wolverines.

Johnson morphed into such an electric presence in Trail, Tambellini said he built his entire team around him. Buoyed by Johnson’s MVP season, the Smoke Eaters were primed for a long playoff run before the COVID-19 pandemic forced the BCHL to cancel the postseason.

“He did things on a nightly basis I don’t know if the fans in Trail even got to appreciate what they were seeing,” Tambellini said. “But looking back, he was almost every night or every second night doing something where the bench was laughing because it was just so impressive. And he was doing it in big moments of the game.”

Sizzle reels of Johnson’s exploits in junior and college can be viewed on YouTube.

“The clips are ridiculous,” Tambellini said.

“I’ve watched that tape a couple times of all the different goals that he scored,” said Dan Marr, the director of Central Scouting. “It’s amazing that he did the same thing at Michigan this year. I’ve talked to some of the players and the coach there, they could make a highlight reel just out of some of the goals that he scores in practice.”

Despite his slick skill set, Johnson, who was undersized early in his teens, had trouble generating interest from teams not long ago. The Everett Silvertips selected him in the 10th round, 208th overall, in the 2017 Western Hockey League Bantam Draft.

“It’s funny, because it wasn’t like he was the most sought-after kid in his age group,” said Maco Balkovec, Johnson’s coach with the Burnaby Winter Club Prep, his last team before joining Trail. ‘He wasn’t being hunted down by everybody. It was almost like he was a little bit … under the radar, which just seems odd.”

Balkovec, who compares Johnson to Vancouver Canucks center Elias Pettersson, did not care about the size. When Balkovec brought Johnson in for a look, he said he looked like “someone’s little brother out there.”

“But he had the puck the whole damn time,” he said. “I just said to my assistant coach, ‘What do you think?’ And he’s like, ‘Are you dumb?’ So it wasn’t that hard for us to take him.”

Johnson utilized a lethal shot he developed that season to score 29 goals and 75 points in 35 outings.

“He’s so dedicated to his craft, and he’s literally the greatest student of the game of any player that I’ve had the pleasure to coach,” Balkovec said. “He knew that he really needed to work on his shot, and the more he worked on his shot, as soon as he became a threat from the outside, then it became so difficult to defend him, because if you sat back, he’d score from outside, and as soon as you challenged outside, he’d just beat you one-on-one inside.”