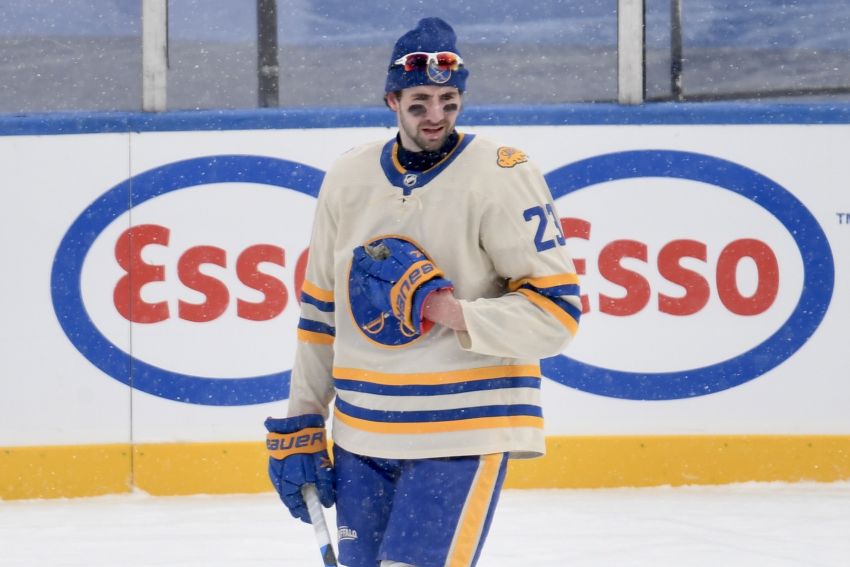 BUFFALO – The poise Mattias Samuelsson possesses belies his experience. Barely 30 games into his NHL career, the Sabres consistently utilize the rookie against the opposition’s top talent.

On Thursday, Samuelsson faced Edmonton Oilers superstar Connor McDavid. In Sunday afternoon’s 5-2 win over the Toronto Maple Leafs, the defenseman was often tasked with shutting down Auston Matthews and Mitch Marner, one of the NHL’s elite duos.

At one point Sunday, with Marner roaring toward him, the 6-foot-4, 227-pound Samuelsson calmly utilized his long reach and ended the threat.

“The things that jump out to me about Mattias are certainly his length and his ability to kill plays,” Sabres general manager Kevyn Adams told the Times Herald. “He’s disruptive, he’s got a tremendous stick, he’s got a calmness about him out there.”

Sunday’s outing and last Thursday’s 3-1 win over the Vegas Golden Knights rank among the best of Samuelsson’s short career.

Against the Leafs outdoors at the Heritage Classic, Samuelsson, 22, recorded a career-high six hits and tied his career best by blocking three shots.

“That was one of the coolest games I’ve ever played in, even though it is just a regular-season game,” Samuelsson said following Tuesday’s practice at LECOM Harborcenter.

Versus the Golden Knights in ex-captain Jack Eichel’s return, he played a career-high 23 minutes, 47 seconds.

“You saw it in two really bigger games with the lights a little brighter,” Adams said. “There was a calmness about him, and I think that says a lot about a young player.”

Having coached Samuelsson and Matthews in junior, Sabres coach Don Granato said he knew the neophyte could handle one of the NHL’s elite goal scorers.

“I have a real good feel and gauge for when I look at Mattias and say he’s not gonna have any problem with him,” Granato said Tuesday. “I know he can do it. It’s comforting for me to have that knowledge of some of the best players around the league, and I have no problem with him going against them.”

“His athleticism is incredible,” Granato said. “He moves that big frame of his so well, so quick, and beyond that he has hockey sense, he has determination, he has so many intangibles.”

Adams said Samuelsson, the 32nd overall pick in 2018, uses that athleticism and his hulking frame to play a physical style.

“There’s certain times when I see him rub a guy out and it’s heavy,” Adams said. “Like, he’s a strong kid and he’s an athletic. So I think he has a lot of opportunity to grow and continue to get better.”

If Samuelsson hadn’t suffered a lower-body injury in rookie camp, he might’ve made the Sabres’ opening night lineup. He played 12 late-season games last year, and he appeared ready to graduate to the big leagues for good.

But the injury sidelined him until early November, and when he was healthy, the Sabres sent him to the Rochester Americans. They finally summoned him again in mid-January.

“When you first come up, you get a little nerves and you don’t want to mess up or anything like that,” Samuelsson said. “Now, being here so long, just knowing that I can play my game or I can do the things I want to on the ice, that’s the biggest thing.”

Rousek, 22, underwent surgery last year after injuring his ACL. The Czech has been practicing with the Amerks.

The Sabres drafted Rousek in the sixth round in 2019, 160th overall.