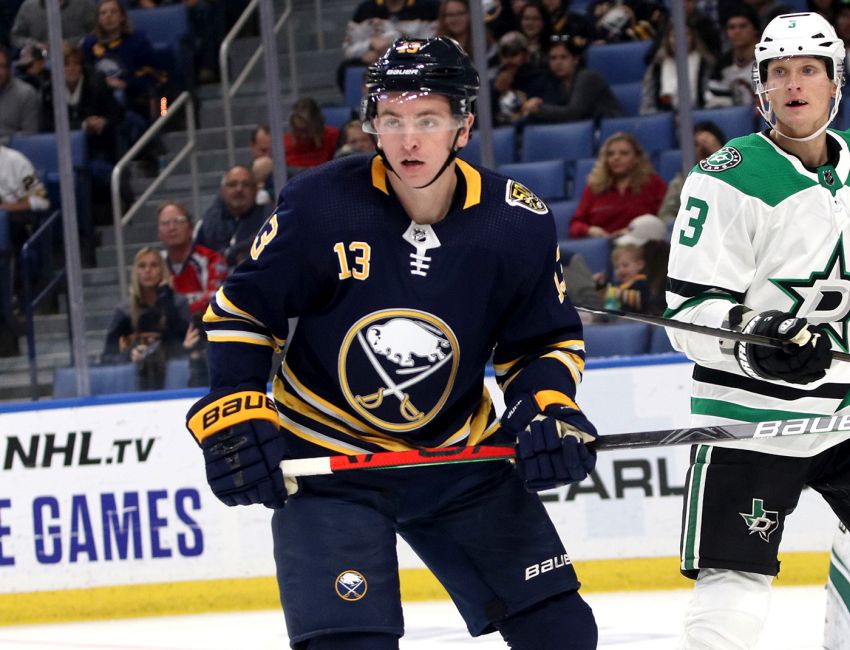 BUFFALO – In the last month, a wretched stretch in which the Sabres have lost 11 of 13 games and plummeted down the standings, winger Jimmy Vesey said he has seen some positives.

“There’s a lot of games I think we liked the way we played for most of it,” Vesey said after scoring a breakaway goal for the second straight game in Wednesday’s 3-2 overtime loss to the Calgary Flames.

But what has that earned the Sabres? Sixth place in the Atlantic Division.

Sure, the Sabres do some things well for stretches.

In Thursday’s 3-2 loss in Boston, for example, the Sabres outshot the Bruins 17-4 in the first, yet ended the period tied at 1. On Wednesday, they pumped 16 shots on goal in the third and went up 2-1 lead when Victor Olofsson scored 1:55 into the period.

The lead lasted barely two minutes before the crowd of 17,485 inside KeyBank Center.

Matthew Tkachuk tied it at 4:02 before Elias Lindholm scored 1:17 into overtime, capitalizing after a tired Rasmus Ristolainen chased him behind the net.

“I don’t know what it is, but we’re finding a way to not close out games,” said Vesey, who believes the Sabres must pay more attention to details. “Maybe things are snowballing just the way it’s gone.

“We’ve got to get back to the start of the year. When we were playing like that there was a really good feeling in this room and we’ve played that style for stretches.”

“It’s probably a lack of confidence,” Sabres coach Ralph Krueger said of the missed opportunities. “I mean, you can see Vesey now, he gets his first goal and how confident he was on that opportunity. We just need more guys firing. There’s quite a few guys that are not hitting the target right now. …

“We need to create more second chances, we need to be even stronger inside to create a different type of scoring chance if we keep getting stuck like this.”

Vesey, one of the Sabres’ notable offseason acquisitions, was stuck on zero goals for 19 games before scoring his first in Monday’s 5-2 road loss to the Tampa Bay Lightning.

The American scored again short-handed 6:32 into the second period, capitalizing after rookie Rasmus Asplund caused Lindholm to cough up the puck inside Calgary’s blue line.

“I just tried to stick to the structure, the plan we came up with before the game,” Asplund said of how he caused the turnover.

Krueger said: “That goal was no fluke.”

Asplund’s seventh NHL game might’ve been his best. In addition to recording his first point, the youngster, who was shifted to left wing from center, played aggressively.

“Asplund you can see as a winger is a threat,” Krueger said. “He can make a play, he defends well, he’s evolving here daily … he’s somebody you trust. You trust him in your own end and you trust him with the puck.”

While Ullmark received consistent action early in the season, Carter Hutton played most of the games.

Ullmark said he’s “just trying to be the same old me” during perhaps his busiest stretch in the NHL.

“Keep a smile on my face, go out there every day,” he said,” because I know that if I start screwing up things, Hutts is ready to take over. … We both have full faith in each other whoever is in the net.”