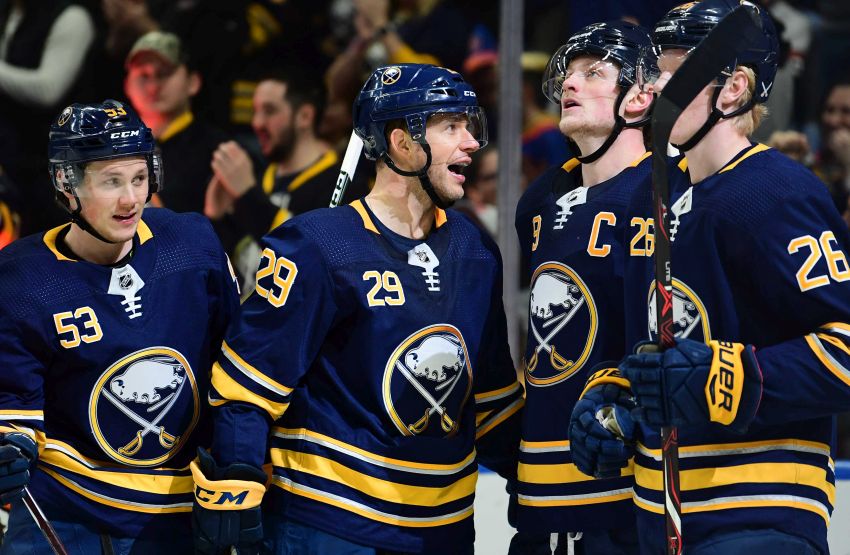 BUFFALO – It has become a regular occurence this season, Jason Pominville’s 14th in the NHL and 10th with the Sabres. Every few weeks or so, the popular winger seems to reach a new milestone or move up among the franchise’s all-time leaders.

Pominville, whose focus has been a huge asset over his splendid 1,037-game career, hasn’t paid much attention to any of it.

“I try to just enjoy the moment, live in the moment,” Pominville said Thursday inside KeyBank Center.

The other day, Pominville, 36, said defenseman Zach Bogosian congratulated him on hitting another mark.

“He’s kind of chirping me a little bit about it,” Pominville said after the Sabres prepared for tonight’s tilt against the New York Rangers, the end of a seven-game home stand. “So I was like, ‘What are you talking about?’”

Make no mistake, everything – the milestones, the special names he now stands beside – holds special meaning to Pominville, who will likely be regarded as one of the best players in Sabres history after he retires.

“To be in that category with some of the guys, I see some of those guys mentioned up in the room, it’s pretty surreal,” Pominville said. “I never in my wildest dreams would I have expected that.”

As Pominville spoke, he glanced toward a photo of Mike Foligno across the room, one of about 20 pictures of Sabres greats coach Phil Housley had hung this season.

Pominville has compiled 214 goals over his two stints with the Sabres. His 212th goal moved him past Alexander Mogilny into 11th place on the franchise’s goal list.

Overall, Pominville has recorded 299 assists and 513 points in 710 appearances (ninth all-time) with the Sabres, putting him 11 assists and 13 points shy of tying Luce for seventh all-time in both categories.

Pominville’s next even-strength goal, his 189th, will move him into a tie with Rene Robert for ninth in team history.

At times this season, Pominville has struggled offensively. He scored just once over a 24-game stretch from November to January. Housley even scratched him Jan. 30.

Still, Pominville has compiled 13 goals and 23 points in 50 outings, including three goals over the last six games. Only one NHL player over 35, Carolina’s Justin Williams, who’s 37, has scored more goals this season (14).

“I feel like we’ve been good on the forecheck, good sticks, keep pucks alive,” said Pominville, who scored 290 career goals. “That’s led to us being able to play more offense when we’re together. I feel like I can be trusted defensively, too, with those guys and not cheat the offense and try to be the guy that’s back if they’re on offense.”

When Housley reunited the trio earlier this month, the veteran started showcasing his scoring prowess again.

“Pommer’s game is very simple,” Housley said. “He gets pucks out, he attacks the game and he goes to the net. You look at a lot of his goals, they’re five to 10 feet around the net. He does a good job of going there, whether it’s a net-front presence or it’s off a rush. He gets rewarded for doing that.”

In Tuesday’s 3-1 win over the New York Islanders, Pominville converted Eichel’s nifty backhand feed in close for the go-ahead goal.

“He makes plays a lot of guys probably wouldn’t try,” Pominville said. “He can make them going full speed or slowing the game down. He can make them at different speeds.”

Even during his prime, Pominville never made many dazzling plays. Supreme smarts and a sturdy all-around game helped buoyed him.

“As a linemate, he’s really easy to read off,” Skinner said. “I think he’s always in the right spot and he obviously makes strong plays and he’s got high-end skill, so those kind of things, they all play a part of it.

“But for me, I think what sticks out the most is sort of his consistency to always be in the right spot and sort of as a line that makes it easy to read off of him.”