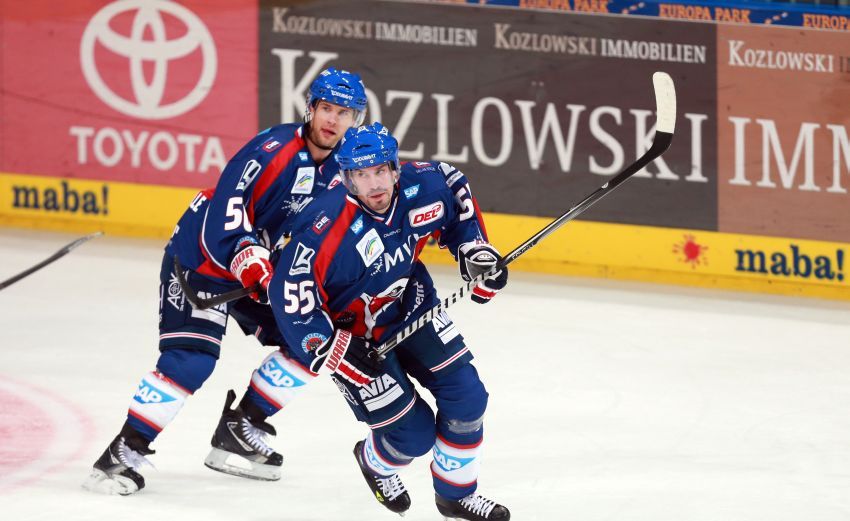 BUFFALO – If you think Sabres captain Jason Pominville’s five-goal, 12-point performance during a short seven-game stint with the Mannheim Eagles was impressive, consider what old friend Jochen Hecht, who hadn’t played regularly in nearly a year, accomplished during the same time with the DEL club in Germany.

In his first action since last January, when he suffered what was believed to be his third concussion in 10 months, Hecht compiled five goals and 13 points in six appearances. He’s still on Mannheim’s roster.

“I will speak to his agent,” Regier said Tuesday inside the First Niagara Center.

Re-signing Hecht to a one-year contract for short money could be a low-risk move. At his best, Hecht’s a versatile, two-way forward, qualities Pominville saw up close again skating on a line beside the German.

“Jochen’s doing great, definitely interested in coming back,” Pominville said Tuesday after skating inside the Northtown Center in Amherst. “He’s actually playing really well. We were playing together. He looks great. He’s healthy. I mean, he’s the same Jochen that’s he’s always been, just one of those guys that is so solid in every area of the ice. … (He had) no health issues. …

Hecht played only 22 games last season, scoring four goals and eight points. He was the Sabres’ longest-tenured player before his contract expired.

Pominville, meanwhile, was back skating with 10 teammates just hours after a marathon travel day from Germany.

“I wanted to be here,” said Pominville, who left the Eagles when the NHL lockout ended Sunday. “I wanted to make sure I get a good sweat. It’s going to be such a short turnaround (before the season) that’s there’s no time to take off.”

“It was fun,” he said. “Honestly, (it’s a) great organization. The GM (Teal Fowler) is from here. He’s a big Sabres fan. They treated me very well. Great fans.

As Regier said during the summer and the team confirmed Monday, the Sabres plan to give slick center Mikhail Grigorenko, the 12th overall pick in June’s NHL Entry Draft, a look during the team’s upcoming training camp.

“It’s based on his abilities and skill level, and that has improved since (junior) training camp,” Regier said. “He’s gotten better, he’s gotten stronger, he’s competed in more areas with and without the puck. So he’s grown.

“For him to come in here, the benefit is he’s going to get an opportunity to be around NHL players, play with NHL players, get an understanding about what it takes to play at this level.”

Regier called the recent reports the Sabres planned to keep the 18-year-old Russian with the QMJHL’s Quebec Remparts all season “false.” Grigorenko has a whopping 29 goals and 50 points in only 30 games.

The general manager’s not worried about using a year of the youngster’s entry-level contract.

“It’s really about whether he can step in and contribute,” Regier said. “The deciding factor won’t come down to whether we burn a year on the contract or not.”

Under the old collective bargaining agreement, Grigorenko would’ve received a nine-game trial before his contract kicked in. Regier wasn’t sure if that number will stay the same.

Whatever happens, the odds aren’t great Grigorenko will stick around.

“The reality of an 18-year-old playing in the National Hockey League, if you were to go to Vegas and place a bet on it, most 18-year-olds go back and play juniors,” Regier said.

Sabres forward Cody McCormick, who’s been skating with teammates for months at the Northtown Center, suffered a finger injury last year that could sideline him into the season, Regier said.

Regier said the injury bothered McCormick all summer. He hasn’t had surgery.

In other injury news, defenseman Tyler Myers recently returned to his Austrian team after a left ankle strain sidelined him a few weeks.

“I can’t say it’s a concern,” said Regier, who believes Myers will be ready for the season. “It’s an open question. It’s why we will have physicals. It’s an unknown.”