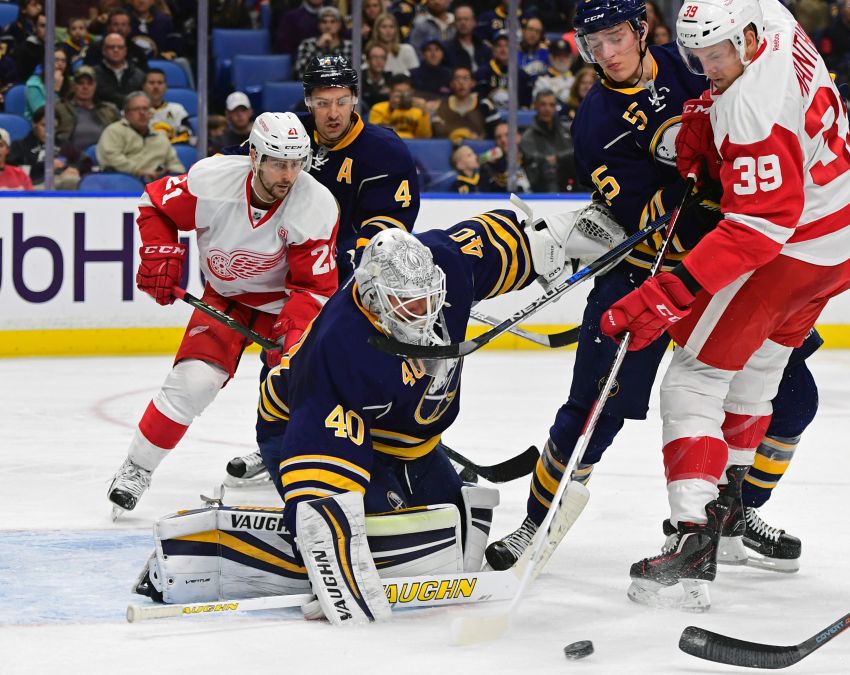 BUFFALO – It’s easy to forget now, with Robin Lehner and Anders Nilsson tending some of the NHL’s best goal, but six weeks ago, the Swedes were two of the Sabres’ biggest question marks.

Lehner, 25, was coming off a season in which a high ankle sprain dogged him and limited his action. Meanwhile, Nilsson, 26, had enjoyed little sustained success as a backup goalie for three other teams.

Right now, they’re quietly one of the league’s best duos entering this afternoon’s road tilt against the Washington Capitals.

In a season full of disappointments – injuries, meager offensive output and tight losses, to name a few – strong netminding from Lehner and Nilsson, who has subbed splendidly, has been one of the Sabres’ few constants at the one-quarter mark.

“Those guys have been amazing,” Sabres winger Marcus Foligno said Thursday following practice inside KeyBank Center. “So we feel like we’re in it every night.”

In fact, Lehner and Nilsson are probably the biggest reason the 7-8-5 Sabres, believe it or not, were only four points out of a Wild Card spot as of Thursday afternoon.

The goalies’ combined save percentage of .927 ranks third in the NHL, trailing only Minnesota and Montreal. Their combined 2.35 goals-against average ranks seventh.

“I don’t know if we knew exactly what we were getting in the goaltending from Anders, but from Day One he’s been absolutely nothing but a (pro). (He has) worked extremely hard.”

Lehner, who played a career-high 36 NHL games three years ago, said he has never felt more consistent in his play and preparation.

“The last stretchof games there’s been goals that they’re not bad goals, they’re good goals, but I want to have them,” he said. “That’s the type of goalie I feel like I can be.”

Of course, the Sabres can stop the puck. They just can’t put it in the net. They’ve only scored an NHL-low 37 goals, just 1.9 a contest.

But Lehner and Nilsson offer the Sabres some hope. If they start scoring at even an average clip – remember, slick center Jack Eichel is due back soon – they could start winning regularly.

“When you can have two goalies going in there and giving you those kind of chances each night, it gives you a chance to kind of be successful,” said Sabres defenseman Cody Franson. “They’re a very big part of why we’re at where we’re at.”

While the Sabres are close to a playoff spot, they’re last in the Atlantic Division. Six teams are ahead of them in the Wild Card chase. They still have a long way to go.

But they have seven one-goal losses. They’ve played teams close.

“If there’s one thing that’s stuck out so far for this group this season, it’s been our work ethic,” Franson said.

He added: “I don’t think we’ve had a night yet where we just went out there and didn’t play. We’ve had some tough nights, but it wasn’t due to lack of effort. I think that’s something to be said for our group.”

“There was some contact, so to speak,” Bylsma said. “He was bouncing in and out of guys. I think, yeah, it’s another step.”

Thursday’s session inside KeyBank Center was a true practice.

Eichel, 20, won’t accompany the Sabres to Washington. Instead, he will skate on his own in Buffalo.