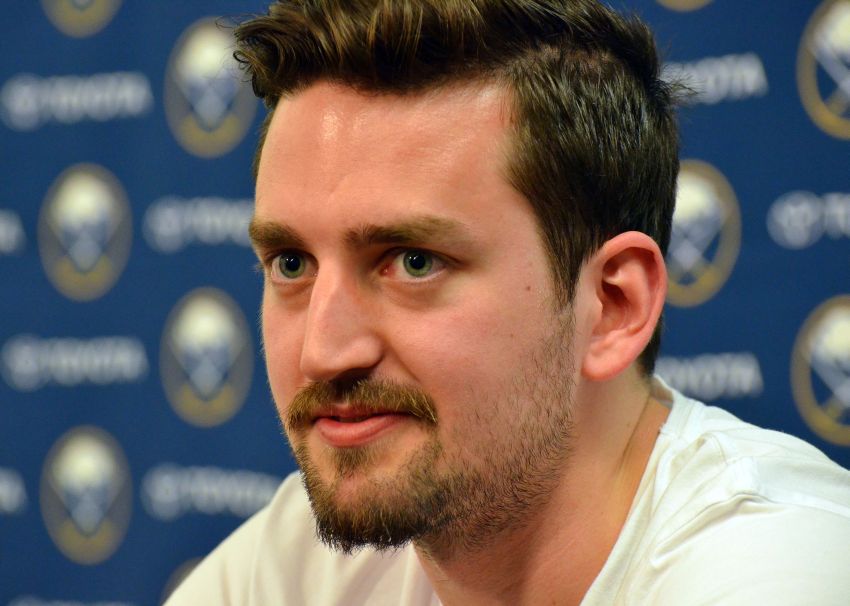 BUFFALO – Trace Jhonas Enroth’s resurgence back to March 7, the goalie’s first start in 30 days and likely his last if he didn’t impress the Sabres that night in New Jersey.

At that point, the backup was reeling, 0-2 on the season and winless in nearly 16 months. The Sabres couldn’t afford to let Enroth keep losing.

“(I knew) it could be my last game,” Enroth acknowledged Thursday inside the First Niagara Center after signing a two-year, $2.5 million contract. “I kind of had my back backed up to the wall there.”

So Enroth told himself “to enjoy the moment.” After all, he wasn’t sure when he’d receive another nod. He made a conscious effort to “go out there and relax, play like I know I can,” he said.

“That worked for me the last couple months,” Enroth said.

It certainly did. While cramps forced Enroth out of the 3-2 shootout loss, he dazzled against the Devils. That effort rejuvenated the Swede and earned new coach Ron Rolston’s confidence.

Enroth, who turns 25 years old Tuesday, kept thriving with regular action down the stretch, going 4-1-1 with a 1.47 goals-against average, a .956 save percentage and one shutout in his last six starts. Then he backstopped Sweden to a gold medal at the world championship, winning the deciding game in Stockholm, his hometown.

“That was amazing to win at home,” Enroth said.

Now, with starter Ryan Miller’s status in limbo, Enroth could be the Sabres’ No. 1 goalie next season. He feels ready, although he’s quick to mention it’s still Miller’s team.

“Obviously, I care what’s going to happen with Ryan,” said Enroth, who thinks he could handle a 60-game load. “He’s a good friend of mine. I look up to him a lot. I wish him the best. Whatever happens happens. Who knows what’s going to happen? But I try not to worry about that too much right now.”

Sabres general manager Darcy Regier believes Enroth has proven he’ll be a starter in the NHL someday. The adversity he endured – Enroth won nine straight games in the beginning of his career before going 13 starts without a win – has made him a better netminder.

“With that type of adversity, it never leaves anyone in the same position you were prior to answering the adversity,” Regier said. “In Jhonas’ case, I would go back to a game in New Jersey, even though he was dehydrated and cramped up, but at the end of the game, for me, that was really the start of him turning the corner, driving through the adversity. He kept his game going from that point for us, and then it continued on in the world championships.

“Winning as a starting goaltender in Sweden for Team Sweden with that pressure, beating the teams that he beat, speaks to where he thinks he is as a goaltender and where his career is and where he can go to. So it goes a long ways gaining that confidence.”

That confidence stems from Enroth’s new approach. He also started ignoring media reports about him to alleviate the pressure he put on himself.

“That’s the biggest thing,” Enroth said. “I stopped reading media after that, just tried to focus on my own game and listen to the coaches and stuff like that.”

Leading Sweden to gold was a special experience, one that proved to Enroth he “really can play on a high level there, so I feel like I can get a little bit more workload.” Thirty thousand people lined the streets for a parade after the victory. He has a new level of “celebrity,” too.

Enroth could’ve waited to sign his new contract, perhaps watched Miller’s situation unfold this summer and gained some leverage if he became the Sabres’ starting goalie. But Enroth didn’t want to wait.

“We felt like we came to a point where I was happy and the Sabres were happy,” he said. “We felt like that was a good deal to sign. We don’t really care what would happen with Ryan.”