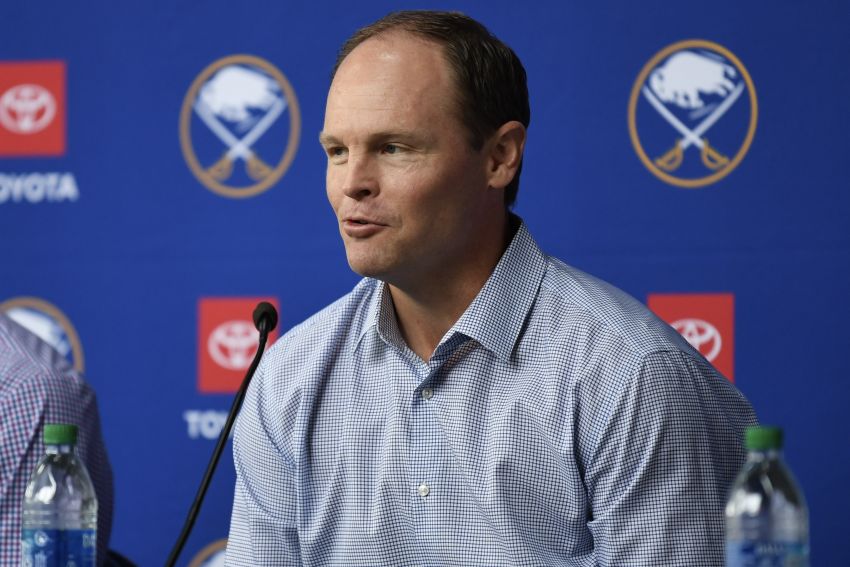 Kevyn Adams has a lot of assets to strengthen Buffalo. ©2022, Micheline Veluvolu

If Adams offers one or two of the selections in a trade, he can likely acquire some established talent that might help the upstart Sabres right away.

But Adams, as he has demonstrated throughout the last year, plans to keep exercising patience.

“You can’t hit fast-forward,” Adams said Tuesday during his end-of-season news conference at KeyBank Center. “… Certain decisions you can make in the short-term that maybe would push you a little bit further along, it may come back to haunt you a little bit later. We have to be really disciplined and careful as we put this together.”

Adams said right now, he “would expect that we would make our three picks.”

“I believe in the pipeline you have to build,” he said. “When we talk about long-term sustainable success, you need talent. You need talent that can come up from Rochester, and you don’t have to rush them. You can let them grow and develop. And then when they’re ready, boom, they’re here and they’re ready to be impactful, not just surviving.”

In addition to their own first-rounder, the Sabres acquired the Vegas Golden Knights’ selection in the Jack Eichel trade and the Florida Panthers’ pick in the Sam Reinhart deal.

The Sabres, by virtue of finishing 24th overall, have just 5 percent odds to secure the first overall pick in Tuesday’s NHL Draft Lottery. The Golden Knights finished 17th, so their selection (0.5 percent odds) cannot move up more than 10 spots based on the new lottery rules.

If that pick jumps into the top 10, the Sabres will receive Vegas’ first-rounder in 2023.

The Panthers, who won the Presidents’ Trophy, are participating in the playoffs.

Of course, while Adams said he plans to make the picks, he’s still open to doing anything with them.

“We will have conversations,” Adams said. “If there something that we do that makes sense that we think is going to put us in a better position, then we’ll do it. What we won’t do is do something we think is just a short-term fix because … that’s not where we’re at right now.

The Sabres might need to find an experienced goalie if Craig Anderson retires and could also be in the market for a veteran right-shot defenseman. Even a late first-round could pry one away from another team.

“Part of our plan was to accumulate assets,” Adams said. “So we would expect that we would use them appropriately. But you’ve got to be open. You got to be in the conversations and you have to be ready for any type of thing if the right opportunity presents itself.”

The Sabres haven’t drafted three players in the first round since 1983, when they took goalie Tom Barrasso (fifth) and forwards Normand Lacombe (10th) and Adam Creighton (11th).

Sabres winger John Hayden has been named to Team USA’s entry at the upcoming World Championship in Finland.

Hayden, 27, compiled two goals, four points and a team-high 84 penalty minutes in 55 games this season, his first with the Sabres.

Sabres coach Don Granato is an assistant coach for the U.S. The tournament begins May 13.

The Rochester Americans can win their first AHL Calder Cup Playoffs series since 2005 tonight in Belleville.

The Amerks rallied from a three-goal deficit to beat the Senators 4-3 in overtime in Wednesday’s North Division play-in round opener at Blue Cross Arena.

The best-of-three series would conclude Sunday in Belleville if the Senators win tonight.