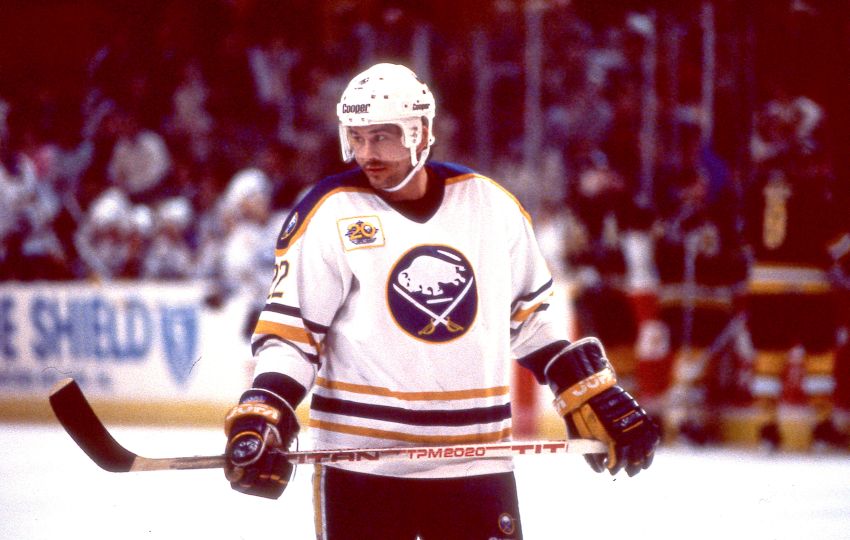 Rick Vaive was still a 30-goal scorer when he joined the Sabres. ©2020, Janet Schultz

In his new book, “Catch 22: My Battles, in Hockey and Life,” three-time 50-goal scorer Rick Vaive, who played four seasons with the Buffalo Sabres, offers a thoughtful account of his struggles with alcohol.

For much of his life, Vaive, a Toronto Maple Leafs legend and former captain, combated his undiagnosed anxiety by drinking. But after a doctor prescribed him medication to treat the anxiety, he kept drinking.

As his 35th birthday approached, Vaive, who had started coaching the ECHL South Carolina Stingrays, spent a night drinking with his players in one of their hotel rooms. When he woke up in his own room, he had no memory of leaving the players or how he got back.

“I decided, for the first time, to quit drinking,” Vaive writes.

Vaive went nearly 15 years without a drink, until he attended his father-in-law’s funeral in 2008 and had some scotch during a toast. That led him down a dangerous path. He started drinking again.

At first, he limited his alcohol consumption. But a little quickly turned into a lot.

Then on July 14, 2009, Vaive’s “world started to crumble,” he writes. That day, he was pulled over driving home from a golf outing in northern Ontario.

He would be charged with impaired driving and driving with over 80 milligrams of alcohol in 100 milliliters of blood.

Vaive had been enjoying a nice living making appearances and being an ambassador for the Leafs. The work ended after that incident.

Vaive and his wife, Joyce, began draining their savings. Joyce fell into a difficult depression, according to Vaive. He felt immense pressure from the upcoming trial.

“My drinking quickly went from moderate to bad,” he writes.

On Dec. 4, 2011, Vaive entered a rehab facility. That’s also the last day he had a drink. On April 12, 2012, he was cleared of the charges, lifting a massive weight from his shoulders.

A few months later, Vaive was asked to start making appearances again. He began receiving regular work again in 2013, and he has rebuilt a nice post-playing career. He gives talks, plays in alumni games and does other work for the Leafs. He also has a podcast through The Hockey News called “Squid and the Ultimate Leafs Fan Podcast.”

“I’m OK,” Vaive told the Times Herald during a phone interview earlier this month from his home in Niagara Falls, Ontario. “Things are pretty decent.”

That’s why Vaive, 61, decided to write the book now. He had opportunities to do it before, but he said he “didn’t feel it was the right time.”

“I just got to a point where I was comfortable with who I was and what I had gone through,” said Vaive, who became a grandfather for the first time in August.

Vaive wanted to provide an unvarnished account of his life – “I wasn’t perfect, and that’s just the fact,” he said – and illustrate athletes are regular people.

“The main reason for it is I think people assume you play 13 years in the National Hockey League … and life’s perfect from the beginning all the way through and you’re rich and you’re a millionaire, which is so far from the truth,” he said. “But I wanted people to know we’re normal people, we’re just like everybody else, and we have challenges and hurdles to get over in our lives just like everybody else.”

He added: “Other people go through those things as well, and the fact that I was able to overcome a lot of those things could perhaps help someone else in the future.”

Of course, the book, which he co-authored with legendary Canadian journalist Scott Morrison, also details the Leafs’ circus atmosphere under owner Harold Ballard in the 1980s and Vaive’s prolific career as one of hockey’s premier power forwards.

Only Wayne Gretzky, Jari Kurri, Michel Goulet, Mike Gartner and Mike Bossy scored more goals in that 10-year stretch. Those five players are all in the Hockey Hall of Fame.

In the book, Vaive, who scored 441 times in 876 career games, talks about his desire to have the Leafs retire his No. 22.

After the Sabres acquired Vaive from the Chicago Blackhawks in 1988-89, he went on a tear, scoring 19 goals in 28 games. He scored 31 goals overall that year, his ninth consecutive season of 30 or more goals.

He devotes more than two chapters of the 255-page book to his Buffalo days and brief stint with the Rochester Americans.

“I enjoyed my whole time,” Vaive said of his Sabres career. “Well, not all my time. The last part of it wasn’t great.”

His career fizzled in 1991-92 after John Muckler took over Buffalo’s coaching duties from Rick Dudley. He became a spare part under the crusty Muckler, whom he believes disliked him because of a couple of incidents before their days together in Buffalo.

As the scratches piled up, Vaive asked Muckler to move him. Muckler told him none of the other teams wanted him.

“That whole conversation went downhill in a hurry,” Vaive said.

So Vaive requested general manager Gerry Meehan send him to Rochester. The NHL was expanding in 1992, and Vaive wanted to chance to impress the new clubs.

While Vaive would never reach the big leagues again, his 28-game run with the Amerks reignited his passion for hockey. He had never played a game in the AHL or any minor league.

More from Vaive on his career in Buffalo:

For three seasons, Vaive played under a young assistant coach he said “was very quiet.” His name? John Tortorella, the fiery coach of the Columbus Blue Jackets.

Tortorella, who has coached four NHL teams, is known for his profanity-laced outbursts and battles with reporters. But about 30 years ago, he was a little tamer.

“He was always willing to sit down and have a chat,” Vaive said. “It was funny, because I see him over the years that he’s been a head coach in the NHL and I see some of the interviews and stuff and I’m thinking like, ‘Wow, that’s not the same guy that I played for.’ But I guess that’s kind of how it is sometimes. When you’re an assistant, the head coach is the guy. …

“He was a fiery guy, he had a temper like everybody else. But he just couldn’t, I guess, show that when he was an assistant.”

The Sabres made the playoffs every season with Vaive. In 1989-90, they finished third overall in the 21-team NHL. Vaive played with four future Hall of Famers in Buffalo.

Still, the Sabres never advanced past the first round.

“I’m not sure (there) was a whole lot missing,” Vaive said. “I think we had it. It was just, I don’t know, for some reason we didn’t get the job done. But when you look at that team, we had everything. We had toughness, we had skill, we had good players, we had good goaltending.

“It’s just one of those things that it just didn’t go our way, and that happens sometimes.”

Vaive’s Sabres teammates called him the “Million Dollar Man” when they found out he drove a Mercedes 420 SEL. He was making $325,000 at the time.

“At Sabreland (in Wheatfield) at practice one day I pull up in this Mercedes, a couple of the guys were outside and they were watching and they thought maybe it was the owner or something but I got out,” Vaive said. “And then it just became like a joke, you know, well, he’s a ‘Million Dollar Man.’ It was kind of funny.”