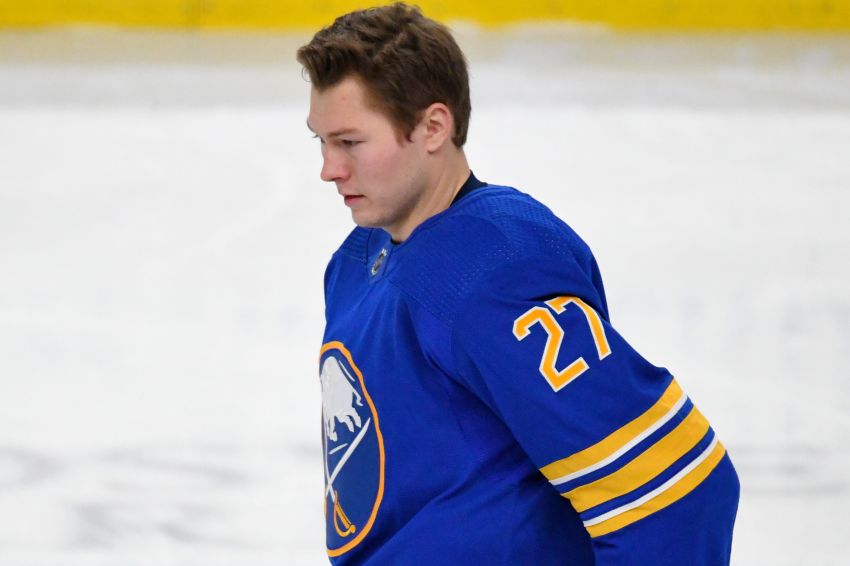 Late in the first period Monday, Buffalo Sabres center Curtis Lazar grabbed the puck at the blue line, skated into the left circle and backhanded a shot underneath the crossbar.

Then after the Sabres grabbed a commanding 3-0 lead over the Philadelphia Flyers, Lazar sealed the Sabres’ first win in the second period, connecting on a nifty pass from linemate Riley Sheahan in front of the net.

When the Sabres, NHL lightweights for nearly a decade, started 0-2 last week, the team’s rabid fan base felt another long season could be materializing.

But Monday’s 6-1 annihilation of the Flyers should extinguish any fears those losses to the Washington Capitals generated. The victory, their first in Philadelphia in eight tries, was arguably the Sabres’ most complete effort under second-year coach Ralph Krueger.

The depth the Sabres possess makes the 2021 edition different than past seasons. Yes, the top line of Reinhart, captain Jack Eichel and Taylor Hall buoyed them. Reinhart scored twice on slick feeds from Hall, including a power-play goal. Eichel and Hall each recorded three assists.

That line could morph into one of the NHL’s best.

On Monday, however, the fourth line of Lazar, Sheahan and Jeff Skinner also wreaked havoc all night, generating offense while clamping down defensively.

“We need everybody to be able to participate, especially on the road where we often had more of a two-line game going last year than a four-line,” Krueger said. “Today was a classic four-line game with no forward going over 18 or 19 minutes. That just wasn’t possible in the past.

“It’s a confirmation of the depth and Lazar’s line with Sheahan, unbelievable with faceoffs today and Skins creating a lot of opportunity just gives you that depth that we need.”

Lazar said his line has “a lot of promise.”

“We got a guy Jeff out there who’s so dynamic offensively,” he said. “When he heats up, he’s one of the best goal scorers in the league. Riley and myself, we’re kind of that defensive role, but that doesn’t mean we’re any slouches in the offensive zone, either. We’re going to get our chances just from playing the right way and working hard.”

“You want to go against the best players each and every night, and to have that trust from Ralph, it speaks a lot but it also speaks to Riley and Jeff, too, and just the way we play,” Lazar said. “We take care of our D-zone first and that’s leading to the offensive chances. The best way to shut down the other team’s top line is grinding them, making them play defense, and that’s something I thought we did a lot tonight.”

Lazar, a first-round pick by the Ottawa Senators in 20123, has rebuilt his career in Buffalo over the last year, morphing from an AHL player into an NHL regular.

“A big part of it’s just trust,” Lazar of his success with the Sabres. “I mean, every since I got here, I worked my way up from Rochester, Ralph’s allowed me to grow within the system, play through the mistakes.

“You’re kind of seeing that growth as a player I think a lot of people anticipated earlier in my career. But again, I’m still 25, I consider myself a younger guy still.”

The genesis of Monday’s victory started Friday, when the Sabres lost 2-1 to Washington but settled down and outplayed the Capitals.

“We probably should’ve gotten a different result for last game,” Lazar said. “But to carry forward that effort into tonight, it speaks a lot about our character and our belief in our dressing room. That’s what we need moving forward. We’ve got guys taking turns blocking shots, going to the net, doing all the dirty work that’s necessary to win.”

Defenseman Henri Jokiharju and winger Victor Olofsson scored the Sabres’ other goals. Goalie Carter Hutton, who found out shortly before the game he would start in place of Linus Ullmark, made 21 saves. Ullmark had to attend to a personal matter.

Krueger said Aube-Kubel hit Dahlin with “a forearm to the head that I’m sure the league is taking a deep look at right now.”

“That’s not the kind of physicality we need to see, especially with the score at that point in the game,” he said.