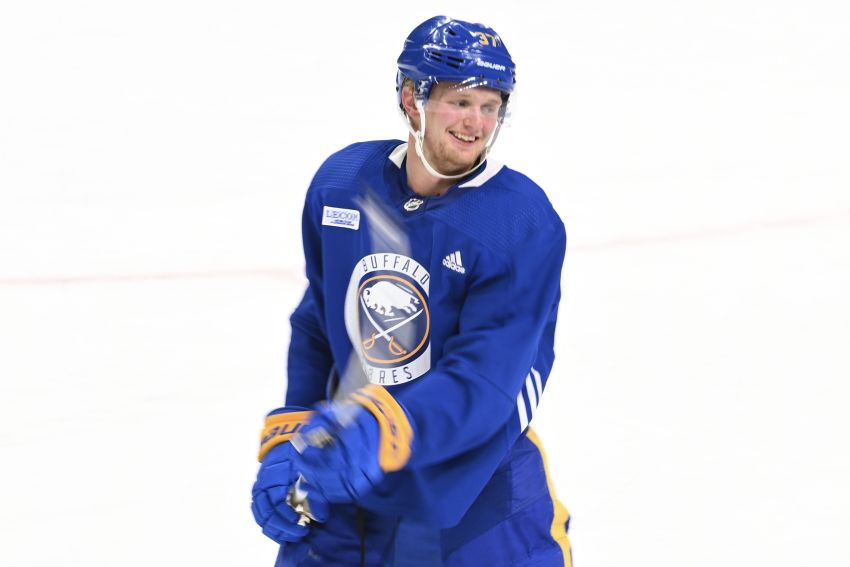 BUFFALO – Early in his career, Sabres center Casey Mittelstadt never thought he would someday go golfing with his general manager. But there he was recently, sharing the course with Kevyn Adams.

On the final hole, Mittelstadt and defenseman Rasmus Dahlin each birdied, giving their team a victory over Adams’ trio.

Besides some healthy competition, the outing offered Adams and the players an opportunity to bond outside of the rink.

Mittelstadt, 23, enjoyed getting to know Adams on more a personal level and talking to his son, who also participated.

“Those things are nice, you get to see him more as a person than just your boss,” Mittelstadt said following Monday’s session of training camp at KeyBank Center. “It was a really fun day. I think everyone had a blast.”

During their four hours together, Mittelstadt, who battled two significant upper-body injuries last year, told Adams how he spent the summer at home in Minnesota preparing for a critical season.

“He’s a really intelligent, hardworking, self-aware player,” Adams said Thursday. “And I think those are the types of guys that have success. So I’m excited for Casey to be healthy, to get out there and be able to play his game.”

Mittelstadt wasn’t healthy much last season, missing 42 games. Following a terrific camp in which he earned the No. 1 center job, he went down on opening night and did not return until Dec. 2.

He played three games before suffering another injury that forced him to undergo surgery. He returned in late January, but after three appearances he left the lineup. He did not play again until Feb. 19.

While Mittelstadt, the eighth overall pick in 2017, hasn’t played a full season since his rookie campaign in 2018-19, the Sabres still regard him as one of their core assets.

“Here’s a guy that’s put the work in and you want to see him get rewarded for it,” said coach Don Granato, whose Sabres host a preseason game tonight against the Philadelphia Flyers. “He is in really good shape. He’s skating really well. … I just want him to stay healthy. I think that he will and we’ll all get to see a much, much better version of Casey Mittelstadt based on not only the work he’s gone through but the experience he’s gained, some of it just having to sit on the sidelines. You gain some experience, especially at that age.”

Adams said Mittelstadt “has really matured over the years and he is extremely driven to be his best.”

“He’s a guy that I could see it in him last year,” he said. “He wanted so bad to get back and playing and playing at the level he knows he can play at. But it’s tough when you go through what he went through and trying to play catch up during the year. He’s had a good summer. He looks really good.”

Mittelstadt has emerged from his setbacks more confident, a sign of maturity. After the Sabres demoted him in 2019-20, he began the next season on the taxi squad and often skated as a fourth-line winger when he received spot duty.

Still, by the end of that year, after Granato moved him up, he had morphed into one of the Sabres’ top forwards. When he was sidelined last season, he said he studied the action on the ice and developed better habits away from the rink.

“I found that it helped me a ton to watch hockey, imagine yourself being in every spot,” said Mittelstadt, who compiled six goals, including two in the final three games, and 19 points in 40 contests last season.

Right now, it’s unclear which position the 6-foot-1, 195-pound Mittelstadt will play this season. He began camp at left wing before shifting to center on Monday. In Mittelstadt, Dylan Cozens, Peyton Krebs and Tage Thompson, the Sabres have built up impressive depth down the middle.

“Wherever he puts me, I’ll play, I’ll play hard and try to have some fun,” said Mittelstadt, who will likely make his preseason debut tonight. “I think I’ve played both before, so it’s no problem bouncing back and forth. … It honestly doesn’t feel much different playing wing and playing center, especially in our system, just because we’re trying to always be moving and then pressure the puck.

“So if you’re the first guy back, you’re playing center. For me, it’s pretty much the same.”

Granato said goalie Craig Anderson, 41, will likely start against the Flyers. He’s not sure how long the veteran will play.

Given his age and experience, the Sabres handle Anderson differently than their other goalies.

“We communicate consistently with him but he can verbalize and tell us how he feels and he knows what he needs to get done to prepare for three weeks from now or whatever it is,” Granato said. “In season, it’s the same. He knows where he’s going to be in two, three days and what’s going to help him get there. So lots of communication with a guy with that much experience.”

One thought on “Confident and healthy, Sabres’ Casey Mittelstadt ready for breakout season”