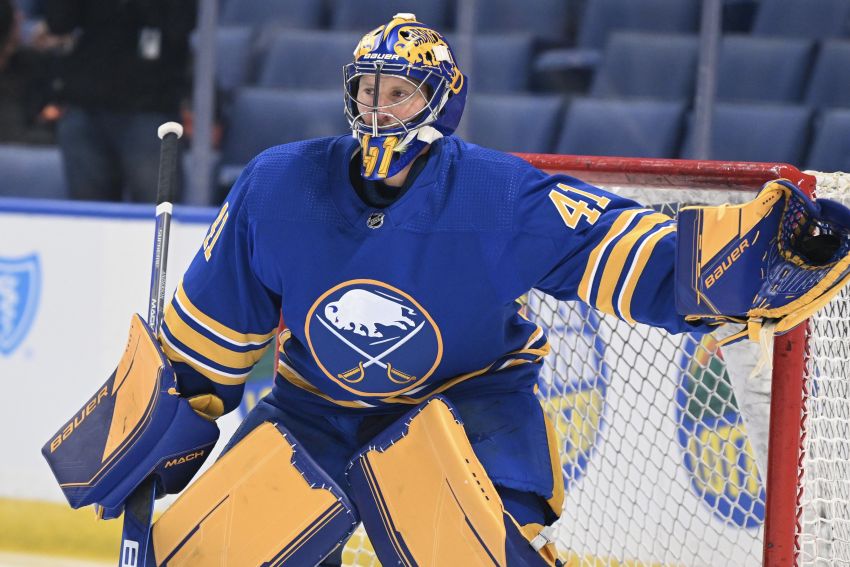 BUFFALO – Craig Anderson left town five months ago knowing he could return to the Sabres and play his 20th NHL season if he desired.

In his first year here, besides often giving the Sabres terrific goaltending, the veteran’s professionalism and work ethic set a high standard for the rebuilding team. He quickly became a leader and a mentor during what he has called an “amazing” year.

Even though he was about to turn 41, Sabres general manager Kevyn Adams and coach Don Granato told him they wanted him back.

Anderson, however, needed to contemplate his future. He wondered about the long-term effects of the neck and hip injuries that combined to sideline him 35 games last season.

He began his normal offseason workouts – “That kind of summertime groove,” he said – and felt good. He spoke his wife, Nicholle, their children and his agent.

“I still had that urge, right?” Anderson said following Friday’s session of training camp at KeyBank Center. “I think the message is that if you feel you can still compete and still do, and you still love doing it, why not keep trying?”

So for three or four weeks, Anderson said he kept asking himself the same questions at the gym: “Is this something I want to continue through the summer? (Do I) still have that drive to get up every morning and go do it?”

The answer, of course, was yes. On June 30, Anderson signed a one-year, $1.5 million contract.

With Zdeno Chara and Joe Thornton no longer active, Anderson has become the NHL’s oldest player.

“You don’t play and come back and play after dealing with the injuries he dealt with last year, the age he’s at, unless you love the game,” Granato said.

Right now, Anderson’s role this season is unclear. The Sabres likely plan to start the season with Anderson and newcomer Eric Comrie, 27, as their goalies.

Given his advanced age, the wear and tear his 6-foot-2, 187-pound frame has endured over 890 pro games (playoffs included) since 2001-02, it’s unlikely Anderson can carry the load over a grueling six-month NHL season. The American played 31 times last year.

Comrie, who signed a two-year, $3.6 million contract in free agency, could earn the starting job, whether it’s in camp or as the season progresses.

The Sabres also have Ukko-Pekka Luukkonen, a prospect labeled as their goalie of the future, and veteran Malcolm Subban, 28, in camp. Adams has said they want Luukkonen, 23, to play games with the Rochester Americans this season.

Despite being one of the NHL’s most decorated goalies – his 308 wins rank 34th on the all-time list and fourth among active players – Anderson doesn’t expect playing time to be handed to him.

“My job is to earn my spot, earn my ice time, make it difficult for these young guys to come in and take that ice, right?” said Anderson, who started and played half of Tuesday’s 4-3 preseason win over the Philadelphia Flyers. “I mean, I’ve got, obviously, a reputation of ‘Hey, you’ve been here, you’ve been doing a long time, so you get a little bit of leeway.’

“But at the same time, my conversation would be with the coaching staff is if I’m not earning it, don’t give it to me. And if one of these young guys steps up and earns it, by all means, give him the ball and let him run with it.”

If that happens, Anderson said he would accept a lesser role.

“I would have that conversation, say, ‘Hey, let those guys run with it, and if one of them falters, I’ll be here waiting in the wings kind of like a taxi guy or (however) they want to play it,’” he said. “I’m mentally ready to be whatever role I need to be but at the same time, I trained all summer to be the starter, to fight for my ice and play as much as my body is able to do.”

Anderson, nearly two decades after his NHL debut, still talks like he’s fighting for his first opportunity. He has hasn’t lost the chip on his shoulder that developed early in his career.

While he played his first NHL games for the Chicago Blackhawks in 2002-03, he did not stick in the NHL until he served as the Florida Panthers’ backup in 2007-08. He became a starter with the Colorado Avalanche two years later.

The slights he experienced in the early 2000s still motivate him.

“The next step for me is to continue to prove everybody wrong and why I’m still playing,” Anderson said. “I think people a long time ago said I wasn’t good enough or he doesn’t play the right style to play a long time. And you get all that negativity and you turn that into positive and say, ‘You know what, I’m gonna prove everybody wrong. I’m gonna go out there and compete because I love to compete.’”