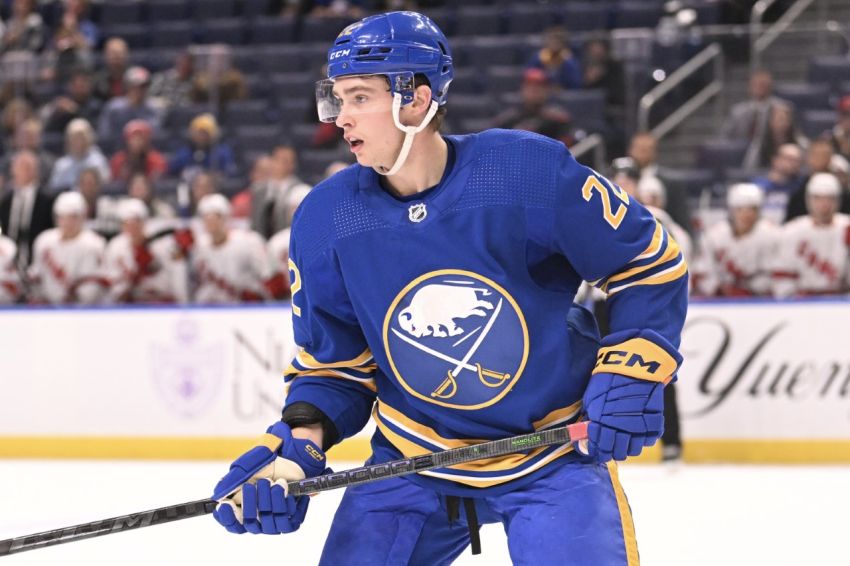 BUFFALO – Early in Tuesday’s 4-2 victory, Sabres prospect Jack Quinn aggressively cut from the left wing into the slot, zipped by a defender and released a low, hard shot toward the far side from one knee.

While Quinn, 21, did not score – Carolina Hurricanes goalie Pyotr Kochetkov made a terrific pad save – the slick play illustrated the youngster’s burgeoning confidence.

“That’s just my game,” Quinn said following Wednesday’s session of training camp at KeyBank Center. “I’m an attacking player, an offensive player. I have the confidence to do that stuff no matter what when I’m on my game.”

Quinn has enjoyed a stellar camp, compiling two goals and three points in four outings. But forget about his stats. So much more has gone into his preseason.

Coach Don Granato said the talented winger has consistently improved as camp has progressed. Since the Sabres pared down the roster over the weekend and began holding one practice each day, the intensity and speed has ratcheted up.

Granato said he has watched Quinn’s confidence quickly increase during those sessions.

“These younger players, the reduced practice really helps them, when you reduce the numbers,” he said. “They’re challenged immensely, and it’s relentless, it’s the entire practice, it’s every turn and edge.”

Nothing, of course, has been finalized. Still, it’s a safe bet that Quinn, the eighth overall pick two years ago today, will be in the opening night lineup next Thursday against the Ottawa Senators.

Having developed into a lethal AHL scorer last season – he scored 26 goals and 65 points in only 45 regular-season games, gaudy numbers that earned him the league’s top rookie honors – Quinn doesn’t have much left to accomplish with the Rochester Americans.

“Kind of considering what I did in the American League, I think personally I’m ready to make the step,” Quinn said of cracking the NHL roster.

Quinn, who played two games with the Sabres last season, arrived in Rochester almost a year ago hellbent on becoming not just a good AHL player but a dominant AHL one.

During a 15-game stint with the Amerks in 2020-21, he displayed flashes of his skill but scored just two goals while compiling an ugly minus-14 rating.

“When I was sent back there last year, I was obviously disappointed to not be in the NHL but excited to kind of prove I could be that impact player in the AHL, which I was able to do,” said Quinn, who registered two assists during the Amerks’ 10-game playoff run. “So I would say setting a goal and being able to achieve it, know all the work I put in, it definitely increases confidence, yeah.”

Granato often tells the story of the meeting he and general manager Kevyn Adams had with Quinn when the Sabres sent him to the minors about a year ago.

“He looked at both Kevyn and I and said, ‘Yeah, I’m disappointed I’m going down, but in the same respect I believe that I want to go down to prove to myself I’m better than I was last year there,’” Granato said. “And he’s driven to be better, so he was. …

“So he has learned it’s within himself now. He’s learned that, I put my mind to doing this, I targeted this and I got it done. That’s a wealth of confidence now because he’s got to re-target at the NHL level as he takes in new information.”

Quinn said: “When you have success, it gives you confidence, maybe just helps my mindset as a player. Now I got to do it all over again at this level. So, I mean, still kind of have a hungry mindset.”

Naturally, the Sabres have been awarding the 6-foot-1, 185-pound Quinn a prime spot on a scoring line and the power play.

In Tuesday’s game, he played with center Casey Mittelstadt and Alex Tuch. In Saturday afternoon’s 3-1 win over the Pittsburgh Penguins, he skated beside No. 1 center Tage Thompson and Victor Olofsson.

“When you play with great players,” Quinn said, “they’re going to make you better.”