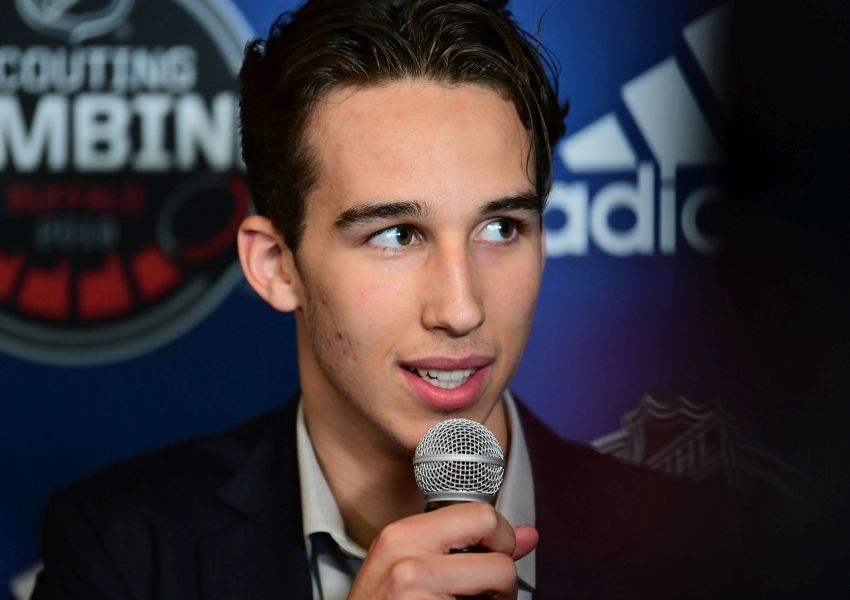 Whitehorse, the only city in the Yukon, a territory in northwestern Canada, has a population of about 25,000. Still, it isn’t exactly close to a lot of major metropolitan areas. It’s 25 hours away from Vancouver, the site of this weekend’s draft.

The solitude of Whitehorse helps make it special.

“When times are going tough, I just want to go back home and get on the lake, sit on my boat and fish for a while, get away from everything,” said Cozens, who, not surprisingly, skated on a backyard rink growing up.

Yukon, which has just under 36,000 residents, has produced only three NHL players: Bryon Baltimore, Peter Sturgeon and Jarrett Dueling.

By early next season, Cozens will have possibly played more NHL games than all of them.

“Dylan’s going to come out the higher-ranked guy of anybody that’s come out of the Yukon, for sure,” Baltimore said.

Dueling, who still lives in Whitehorse, said Cozens is big news around town.

“The whole territory is behind him,” Dueling said.

The 6-foot-3, 183-pound Cozens, 18, will make some history Friday inside Rogers Arena. NHL Central Scouting rated the high-scoring Lethbridge Hurricanes center its No. 5 prospect among North American skaters, meaning he should be among the first picks.

“Not too many players come out of there,” said Cozens, who compiled 34 goals and 84 points in 60 games with the Western Hockey League club last season. “So to show that I can come from the north and anyone can make it from anywhere is, for sure, pretty cool.”

Dueling said: “It’s wonderful. He’s head and shoulders above what anyone else has been.”

Cozens was so talented as a child he started facing much older competition before his teens. Then he broke his leg in a game against men.

“So we’re like, ‘This isn’t real hockey. We got to get out of here. If I want to play in the NHL … it’s not going to happen if I stay up here for much longer,’” Cozens said.

So Cozens left Whitehorse when he was 14 for the better competition Vancouver offered.

“Having to leave my family behind, it was tough,” Cozens said. “But that’s what I needed to chase my dreams.”

Cozens joined a hockey academy and kept developing before moving up to the WHL, where he was the league’s top rookie in 2017-18.

The Sabres sorely need another center to pivot a scoring line. If Cozens lasts until they pick seventh, he would be an enticing choice.

“He does everything with and without the puck full speed and is so tough to contain because of that,” Central Scouting’s Dave Gregory said of Cozens. “He’s behind the D all the time, because if you try to step up on him, he’s elusive; if you stay back, he’s got enough pace to get behind you and use what is good size as well to get to the net.

Here are some other youngsters that could be available to the Sabres with their first pick:

Central Scouting rated Dach, a 6-foot-4, 198-pound center from the WHL’s Saskatoon Blades, its No. 3 prospect among North American skaters.

“He’s a kid that can take over a game,” Gregory said. “Because he can control the puck and possess the puck, he can play below the dots using his hands and skill.”

“The upside of this player is pretty good, because he’s not afraid to mix it up, but then he’ll just outsmart you as well,” Gregory said. “You try to put a body on him and he moves so well when he has that puck that he’s elusive that way. And then all of sudden, somebody or something’s open and he takes advantage.”

Central Scouting rated a 6-foot-2, 194-pound Kaliyev, a winger from the Ontario Hockey League’s Hamilton Bulldogs, its No. 7 prospect among North American skaters.

“His play without the puck, his hockey sense and understanding of how the play is going to develop is some of the best I’ve ever seen since I’ve been doing this,” Gregory said. “He’s very stealth and elusive. Like you wonder, ‘Well, how did he get there, like, was he lucky?’ Well, no, he does it another 10 times in the game.

“He’s big, but he quietly gets away from people. Like, how did you not see that he was there? And boom, it’s in the net.”

Kaliyev, who grew up in Staten Island, scored 31 goals as an OHL rookie.

Boldy has been called “silky smooth” by some observers.

“The power that this kid has and then kind of the finesse that he combines with it, he’s really, really impressive,” Wroblewski said. “I haven’t seen that kind of a power forward ever working at NTDP.”

Boldy said: “It was just kind of how I grew up, always kind of having pretty elite hands, being able to make plays and slip through people.”