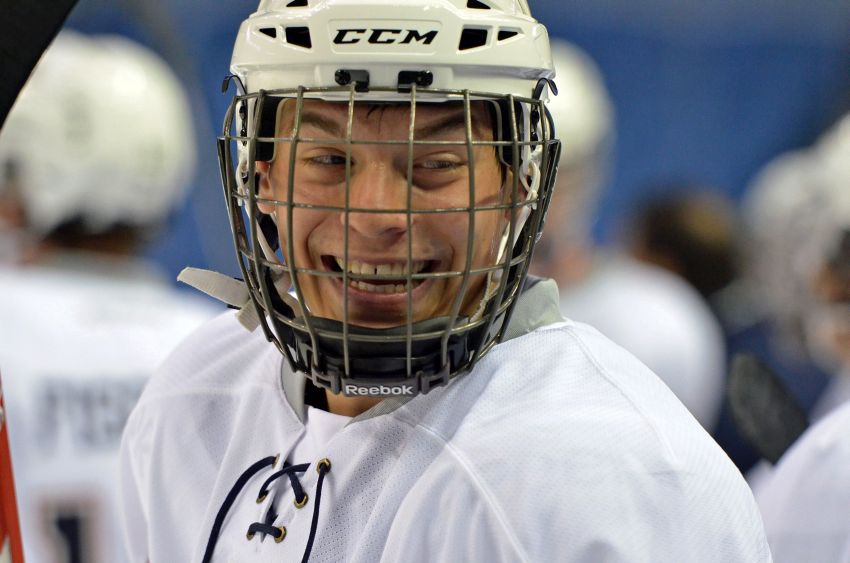 BUFFALO – About 100 family and friends watched No. 5 in white closely all night. Thirty sported neon green “Cecconi Fan Club” shirts, making them impossible to miss in the crowd. They brought spray-painted signs and three large cutouts of the defenseman’s head.

Forty-two youngsters skated in Thursday’s All-American Prospects Game, a showcase of the top U.S. talent eligible for the 2015 draft. Only one, Youngstown’s Joe Cecconi, who represented Team Olczyk, hailed from Western New York.

“I’m pumped up,” Cecconi said prior to Team Grier’s 6-3 win inside the First Niagara Center.

So were his fans.

Cecconi loved the rabid support. He said no to the heads, however.

“I guess they were still there,” he said following the game. “Everything else was interesting to see.”

Remember Cecconi’s name. The 17-year-old, who’s starting his first full season with the junior United States Hockey League’s Muskegon Lumberjacks, should be drafted by an NHL club in June. He has a ‘B’ rating from NHL Central Scouting, meaning he could be a second- or third-round selection.

“He does everything well – moves well, uses the size that he has,” Central Scouting’s David Gregory said. “But his presence and how he uses the game from the back end is one of the most impressive things.”

Cecconi’s calmness with the puck and mobility has impressed Gregory. So has his rapid development. He noticed improvements in just a short span during the summer.

“He snaps the puck when he passes it, shoots it, so there’s going to be opportunities for him to be involved in offense as well,” he said. “He was getting a little bit of power-play time, albeit it in preseason, and he’s on a good team, so we’ll see.”

He added: “I think the upside for him is really solid.”

What does Cecconi think it will take to become an NHL defenseman?

“You got to be able to play defense, that’s the first thing,” he said. “So you can’t just be all offense. (You must be) big, strong fast, and you have to move the puck. You can’t take any crap from the forwards crashing the net.”

It’s been a long road for Cecconi. He developed with the Niagara University, Wheatfield Blades, Buffalo Regals and Buffalo Jr. Sabres programs before Muskegon recalled him last year.

Cecconi’s mother, Regina, estimated she used to put 25,000 miles a year on her car. His grandfather, Joe Cecconi, took over the driving in recent years.

“We do it because he loves the game,” Regina Cecconi said.

She added: “One hundred percent worth it.”

Cecconi’s family convinced him college, not the major junior Ontario Hockey League, would be the right career path. They want him to earn a degree.

“My grandpa said, ‘No, I’m not allowed to play junior,’” Cecconi said.

He chose Michigan because of the school’s history, coaching staff and the Wolverines’ building, Yost Ice Arena. He plans to study business.

In the meantime, Cecconi has nine months to prepare for the draft. He’s not buying into all the hype and projections.

“There’s a still a whole year of hockey,” he said. “If you don’t work hard, then you won’t get drafted. And if you work hard and keep on the same path, then you’ll go where you want.” 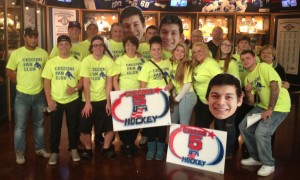