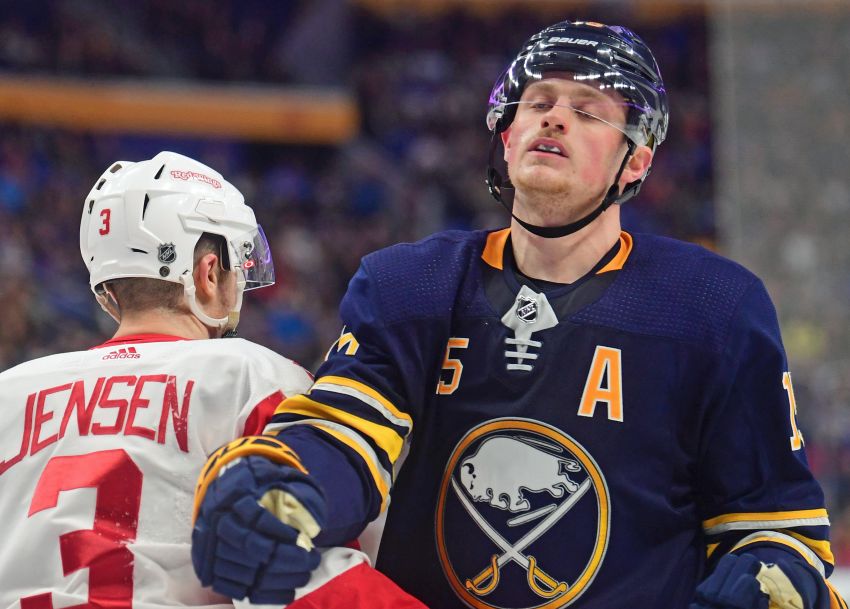 BUFFALO – When the Sabres chose to rotate four alternates this season instead of awarding the prestigious ‘C’ to a single player, they likely started center Jack Eichel’s ascension to the captaincy.

The Sabres, of course, couldn’t name Eichel their captain last October. He was entering just his third NHL season and still prone to bouts of immaturity. He had never worn a letter, either.

So they let him sport an ‘A’ with veterans Zach Bogosian, Ryan O’Reilly and Kyle Okposo.

Eichel, 21, needed to grow into a leadership role.

Early on, as the Sabres slumped badly, Eichel occasionally showcased poor body language on the ice. On Nov. 18, he even skated back slowly after Carolina grabbed the puck, helping the Hurricanes score an easy goal.

But the Sabres’ only NHL All-Star matured throughout a miserable season, morphing into his team’s best player while learning how to act and talk like a leader.

When Eichel discussed a failed season a year ago, he was curt and distant. Before the Sabres departed last week following their 31st-place finish, he spoke firmly – like a captain – saying all the right things.

“You saw in his exit meeting, he’s matured a lot as a young man,” Sabres general manager Jason Botterill said last Wednesday inside KeyBank Center. “Even with his game, I thought when our team was playing some of its best hockey, Jack was a big part of it. It’s not just offensively. You saw when our team had success, we did a lot better away from the puck, tracking the puck. … He’s taken the right steps.”

Eichel said the captaincy isn’t something he thinks about.

“You can always be a leader,” he said April 9. “You can always bring different things to the table. For me, I just try and be myself everyday, whether you have a letter on your jersey or not, I think whatever you do, do it.

Sabres coach Phil Housley said last week the captaincy will be evaluated in the future.

“I thought our captains did a good job this year, but I don’t have an answer for that right now,” he said.

Botterill, who plans to discuss the captaincy with Housley, said he has a “good relationship” with Eichel.

“But as excited as we are about Jack moving forward as a leader, it’s imperative that we have more players in that locker room step up from that standpoint,” he said.

Edmonton Oilers center Connor McDavid, who was born 79 days after Eichel, is the NHL’s youngest captain.

Housley said last week his second training camp will be much tougher than his first as coach.

“There was a lot of philosophy, structure, system change that was implemented,” he said. “I think that took away a little bit, from the conditioning part. Then we had to address that part early in October … the compete, battle, just the standard overall in our practices.

“Looking back at that, we won’t have to do that again (next) year, we’re going to get right to work, and it’s going to be a tough camp.”

Okposo said the coaches put a game plan in place and showed patience. However, he said “some simplification would be good for our team.”

“Just a simple message,” he said. “Just say, ‘I want you guys to go work.’ Don’t worry as much about the Xs and Os and go out there and work. That’s what we can control as players.”