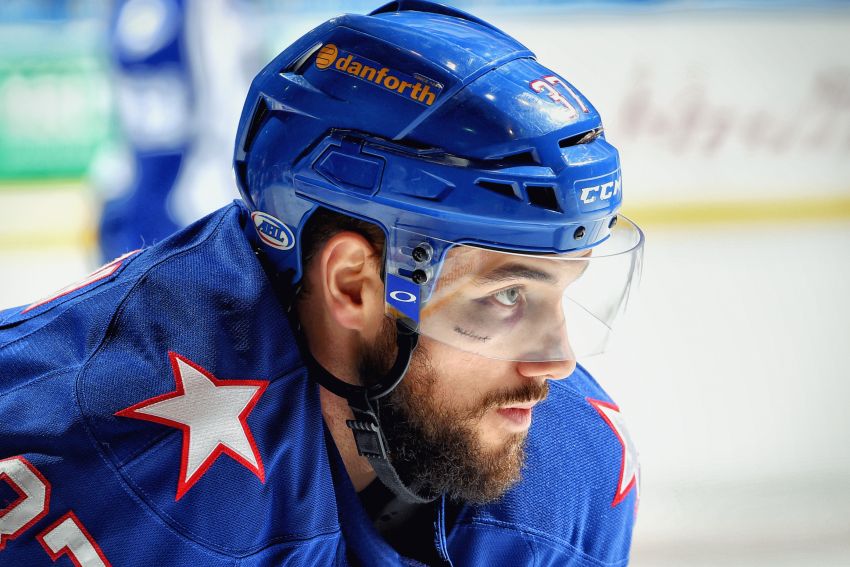 BUFFALO – Long before the Sabres signed him to a two-way contract Monday, Dalton Smith seemed destined to reach the NHL.

In 2010, the Columbus Blue Jackets drafted the 6-foot-2, 210-pound winger 34th overall. Second-round picks, of course, are expected to make the big leagues.

But Smith’s road to the NHL would be long and arduous.

His stint as a bonafide prospect was short. After spending two seasons with Columbus’ AHL affiliate, he started bouncing around the minors as a tough guy.

Six years ago, Smith fought a whopping 20 times. Three years ago, he spent the entire season in the ECHL.

When Smith, 27, joined the Rochester Americans for the 2017-18 campaign, he was on his sixth team in five seasons.

So Monday, Smith’s first day in NHL after playing exactly 400 minor league games over eight seasons, was a little surreal.

“It’s been crazy,” said Smith, who signed a one-year, two-way contract worth $700,000 in the NHL. “I’ve been pinching myself every once in a while. But, yeah, it’s been unbelievable, something I’ve been waiting for for a long time. I’m just very grateful for the opportunity.”

That opportunity will likely materialize tonight against the Tampa Bay Lightning, a team that has pushed around the Sabres this season.

Not only has Tampa Bay beaten the Sabres all three meetings this season (and 19 of the last 23), their Atlantic Division rival has knocked two regulars – forward Vladimir Sobotka and defenseman Rasmus Dahlin – out of the lineup with dirty hits.

In the aftermath of both, the Sabres had no physical response, leading to cries they’re soft and need more toughness.

Lightning star Nikita Kucherov got away with hitting Sobotka late and low Nov. 8. Sobotka is out indefinitely with a lower-body injury and could miss the rest of the season.

The Sabres never sought payback from defenseman Erik Cernak after he elbowed Dahlin in the face and concussed him Nov. 25, sidelining the youngster eight games.

Enter Smith, who has fought 69 times in his career, according to hockeyfights.com.

“You can make a judgment on the timing of it,” coach Ralph Krueger said of the Sabres signing Smith.

Krueger can say otherwise, but it certainly appears the Sabres summoned Smith to provide some muscle. Perhaps they want some retribution tonight.

The first-year coach attributed Smith’s arrival to trying to find “the mix you need to be successful.”

“I value the game away from the puck as much as the game with the puck because I believe that’s where our game with the puck begins,” Krueger said. “We’ve spoken a lot about the need for a certain amount of grit in different forms and what kind of personality do we need through the 11 or 12 forwards that are playing.”

The Sabres, having lost winger Jeff Skinner for three to four weeks with a lower-body injury, needed to add someone up front. Of all the forwards in Rochester, Smith might’ve been the unlikeliest candidate.

For starters, Smith had an AHL contract, meaning he didn’t attend training camp with the Sabres.

But Krueger said he and Amerks coach Chris Taylor, who subbed in Buffalo earlier this season, discussed Smith and the growth he has showcased.

“We did speak about him early in the season and just the way he has grown,” said Krueger, who wouldn’t commit to using Smith against the Lightning. “The coaching staff there is really excited about how he’s worked on his skill set and his defensive ability.”

He added: “He came on the radar really pretty quick, actually, when Chris went back, that there was a huge improvement over (the) last year in him. So we kind of had him earmarked as an option.”

On Sunday, Taylor called Smith to tell him he was needed in Buffalo. To bring him up, the Sabres had to give him an NHL contract.

“It’s definitely a big shock,” Smith told a crowd of reporters following Monday’s practice inside KeyBank Center. “I’m just so happy and so grateful for the opportunity. It’s a dream come true.”

After Smith learned he had earned a new contract and his first trip to the NHL, he called his father, Derrick, who played 527 NHL games, mostly with the Philadelphia Flyers in the 1980s and early 1990s.

Smith said when he told him, he FaceTimed so he could see his reaction.

“He was so happy,” Smith said. “It’s something he’s worked on with me since I could walk basically. So he was very proud.”

Smith has fought 20 times in 114 games with the Amerks, becoming a fan favorite. His penalty minute totals annually soar over 100.

“I love the physical game, getting under guys’ skin and finishing my checks and sticking up for teammates when it’s needed,” he said. “That’s stuff I’ve always kind of done being the oldest of five, the big brother mentality.”

But Smith, who has scored 36 goals as a pro, including one this season, said he also tried to adapt as the game changed, working on his speed and defense.

On Monday, Smith practiced at left wing beside center Curtis Lazar and Evan Rodrigues. Smith’s could push Jimmy Vesey out of the lineup.

“We just think there’s an interesting development,” Krueger said of the progression that helped Smith reach the NHL. “So we’re not just looking at players in Rochester with numbers that are evident for everybody to see.”