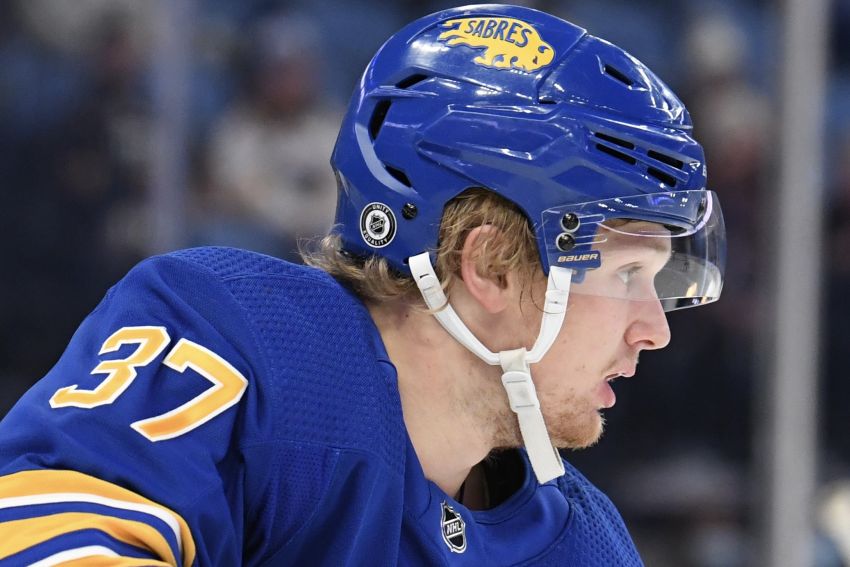 BUFFALO – Sabres coach Don Granato acknowledged that, yes, sometimes it can be hard to resist the temptation to recall one of the organization’s top prospects.

“There is a big temptation, yes, yes,” Granato said following Wednesday’s practice inside KeyBank Center. “When you go to Rochester and you see the skill level of those kids … there’s a big temptation that’s tough to fight at times.”

Having lost center Casey Mittelstadt to another upper-body injury – the team fears he could be sidelined long-term – the reeling Sabres might feel pressure to recall wingers JJ Peterka or Jack Quinn, two rookies off to dynamic starts in the AHL, or winger Peyton Krebs.

The Sabres, losers of nine of their last 10 games (1-8-1), need help everywhere. Krebs, Peterka or Quinn could make a difference, right?

Mittelstadt, 23, just returned from a 21-game absence after suffering an upper-body injury opening night. Then in Tuesday’s 2-0 loss to the Anaheim Ducks, his third game back, he sustained another injury about six minutes into the third period.

Granato said the Sabres are gathering information on Mittelstadt’s injury and having him see doctors. The team doesn’t know if Tuesday’s injury is related to the one he suffered Oct. 14.

“It’s in the area of the (first) injury,” Granato said.

Right now, Granato said it’s difficult for him to think about Mittelstadt, who enjoyed a strong training camp and appeared poised to have a breakout season.

“It’s tough for him, it’s tough for me when I think of him because he is committed, determined player and determined to make the Buffalo Sabres a competitive team,” he said. “He was one of the guys that I mentioned didn’t want to go home last summer after the season, wanted to stay here and train, be in Buffalo.”

The Sabres have two extra forwards, fourth-liners John Hayden and Mark Jankowski, they can utilize in Mittelstadt’s absence. Having lost one of their top offensive threats, they could feel inclined to give a young scorer with the Rochester Americans a look.

But Granato, who said he talks to general manager Kevyn Adams about the Amerks “all the time,” doesn’t want the Sabres to deviate from their development plan.

“Like any other situation, we’re going to look at all other options and see how they fit in with the big picture,” Granato said. “But we’ve got to stay on the big picture despite any aggravation or frustration or anything of the like. So when we get the information on Mittsy and any duration estimate there, I think that’s the time to really start thinking about that.”

Granato doesn’t want to overreact and see anyone rushed to the NHL.

“We want to make sure we’re doing the right thing for the long-term, and it’s tough; it’s tough because you’re in the moment, the emotion of the day,” he said. “You can make a lot of decisions under the pressure of that fix that could jeopardize the vision we have and the big picture.

“And the vision and the big picture that we have, we feel we have a great opportunity because we have some serious talent in our organization, and we’ve seen that.”

Granato used the rapid development of Mittelstadt and centers Dylan Cozens and Tage Thompson as examples. Less than a year ago, all three were healthy scratches with the Sabres. Mittelstadt started last season on the taxi squad.

But they quickly evolved and morphed into some of the Sabres’ top players.

“The ceiling for those guys is immense,” Granato said. “So when we think of that and dipping into Rochester, that’s the consideration. We want guys to get toward the ceiling faster than slower and we want to protect that progression and insulate it with the right support.”