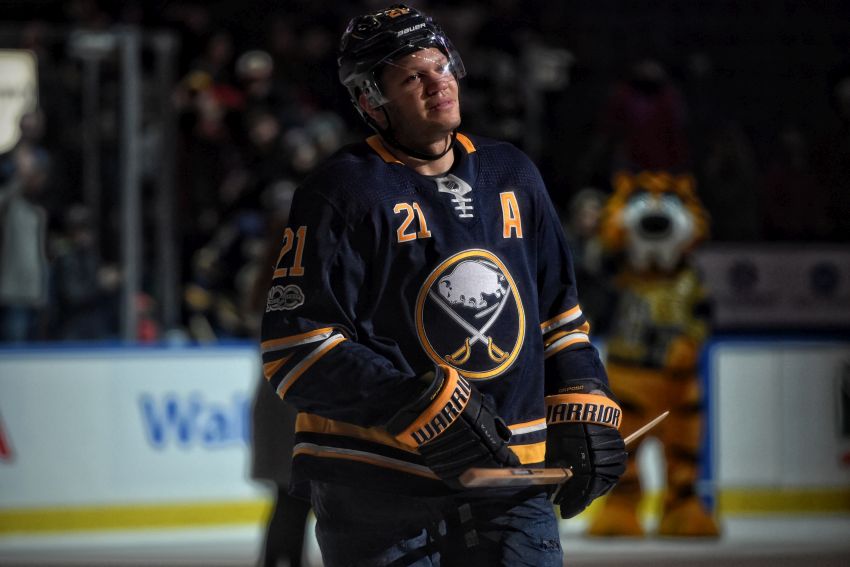 NEW YORK – For a few days at least, the Winter Classic allowed the last-place Buffalo Sabres to experience the NHL’s grand stage.

Everything about the outdoor game, the league’s signature non-playoff event, is big. The Sabres, seven years removed from their last playoff appearance, haven’t been in the spotlight for a long time.

So the Sabres’ time here, which culminated with Monday afternoon’s 3-2 overtime loss to the New York Rangers before a packed house of 41,821 fans at Citi Field and millions more on national television, felt special.

Someday, when the Sabres make it back the postseason, winger Kyle Okposo said, they might draw on playing in the Winter Classic and the attention they received.

“We’ve got a lot of guys that probably haven’t been on that stage in a while,” Okposo said. “That’s more like getting ready for a playoff game. That’s kind of the stage that was set with all the media, all the hype, all the attention. …

“It’s a good learning experience for us.”

Quietly, the Sabres, who have 10 wins all season, have been performing better recently. They’ve earned points in three straight games (1-0-2) and nine of their last 12 outings (4-3-5).

What has changed recently for the Sabres, a team with a new coach, Phil Housley, and about 10 new players?

“Our belief, we’ve really believed that we can win some games,” Okposo said. “We’re having some fun with it and believe in each other.”

At one point, the Rangers held a 14-4 shot advantage.

“It was tough to kind of get settled with a lot of factors, even when you’re on the bench it was tough to … watch the game,” said Sabres winger Sam Reinhart, who scored his first goal in 17 games. “But they’re going through the exact same thing.

Give them credit, they handled it better than we did at the start. But I think we settled ourselves down.”

For the final 40 or 50 minutes, the Sabres outplayed the Rangers.

“We’re just playing a better brand of hockey,” Housley said of the Sabres’ recent stretch. “I think you can see the confidence growing in our guys. … You really learn a lot about yourself as a player and as a team (losing early), even as a coaching staff. But I really like the way we’re playing right now. You can see it out there that there’s times when we bend but we don’t break, which is a credit to our team. “

Incredibly, the Sabres are 2-8 in overtime this season.

“You look in our overtime games … we’ve had opportunities and looks where it’s a breakaway, it’s a penalty shot, it’s a two-on-one,” Housley said. “It’s a glorious opportunity and it comes back, and it’s that old saying, you get a good look at one end and it comes back.”

Given the Sabres’ weak standing, they likely won’t participate in another outdoor game for a while. Clearly, players soaked up the unique experience.

“It stinks to lose,” Eichel said. “I think there’s still a lot that you can take away from this experience. You never know if this is going to happen to you again or if you’re going to get this opportunity. It’s pretty special we were able to do it.”

While it didn’t snow, the temperature was 20.5 degrees at the opening faceoff. The biggest obstacle might’ve been the sunny conditions.

“There’s a big difference,” Reinhart said of how an outdoor game compares to a regular contest. “The first period, it seemed to go by in two seconds. There was so much going on. It would’ve been nice to play the whole game in the shade. You would’ve been able to enjoy the moment a lot more. I think we did that for the most part in the second.”