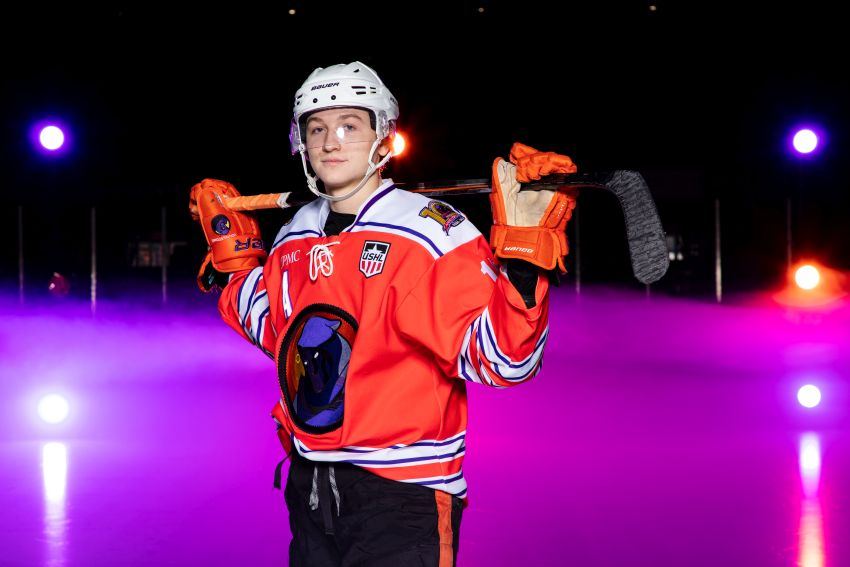 Trevor Kuntar couldn’t stay put in the crease. Never mind his father, Les, played goalie professionally for six seasons. Never mind everyone on the team had to take a turn in net.

In his lone appearance as a goalie, Kuntar’s penchant for carrying the puck took over. Even dressed in the heavy equipment, the Williamsville native kept grabbing it and skating up the ice.

“I just wouldn’t stay in my net, so that was the last time for that,” said Kuntar, who was a 6-year-old playing mite hockey at the time. “I like the action. I don’t really like to sit there and watch, you know?”

So Kuntar’s coaches satisfied his desire to lug the puck around by letting him play forward.

“He’s always been a very high-energy kid,” said Les Kuntar, who played six games for the Montreal Canadiens in 1993-94.

Playing up front buoyed Trevor Kuntar’s development. He morphed into a star for the Buffalo Jr. Sabres as a young teen. He committed to Harvard at 15.

On Wednesday, Kuntar, 19, could be a late-round pick in the NHL Draft.

“I’m pretty anxious just to see what happens,” said Kuntar, who decided over the summer he would attend Boston College.

In 2019, NHL teams passed Kuntar over in his first year of draft eligibility. While he said he wasn’t expecting to be picked, the snubs fueled him.

“It just gave me even more motivation,” he said. “It’s something that I ultimately thought about every single day and I still do think about it every single day. So I’m kind of glad that it happened like that, too, because I feel like I’m in a pretty good spot.”

Kuntar put himself in a good spot by enjoying a terrific 2019-20 season, scoring 28 goals and 53 points in 44 games for the Youngstown Phantoms, a team in the junior United States Hockey League.

“He was able to distinguish himself,” said Dan Marr, the director of NHL Central Scouting.

Central Scouting ranks the 6-foot, 197-pound Kuntar 143rd among draft-eligible North American skaters. Marr said Kuntar, who can play center and both wing positions, could be a fifth-round pick.

“He has a consistent work ethic and a compete game,” Marr said. “(He’s) very effective in puck battles. He’s a good skater, he can pull away on the fly. He’s got the ability to protect the puck. He’s making capable plays in the offensive zone to get the puck to the net and generate some chances.”

Marr said Kuntar needs to develop more hockey sense so he can see the ice better and distribute the puck.

“A lot of the chances that he got came from his own individual skills and effort,” Marr said. “So he needs to take one additional step in his development. He’s taken the correct path in order to do that.”

Kuntar is taking a path similar to his father’s. The Canadiens drafted Les Kuntar out of St. Lawrence University in the sixth round in 1987. Despite being a late-round pick, he developed into a notable prospect and cracked the NHL.

He understands the rigors of the hockey life and how to thrive.

Les Kuntar has tried to let his sons – Cameron, 17, is a goalie in the Jr. Sabres organization – forge their own paths.

He stopped coaching them when they were 11 or 12. He said if they didn’t enjoy hockey, he and his wife, Faye, would’ve let them pursue other interests.

“He never pressured me, never put me in a bad spot,” said Trevor Kuntar, whose parents plan to join him Wednesday in Boston. “He was always super honest with me, which I loved. He’s one of the main reasons I am where I am.”

Trevor Kuntar ended up at Boston College because of the COVID-19 pandemic. The Ivy League has suspended sports until next year and switched to online-only classes. Players can’t even practice in small groups.

“I couldn’t be more happy with where I am now,” he said. “Growing up, BC was the school that I always wanted to go to, and during my first recruiting process, I never talked to them. But it was funny how it worked out.”

If Kuntar had attended Harvard – the school doesn’t award athletic scholarships – he would’ve been paying a lot of money to learn remotely while putting his hockey career on hold.

Boston College offered Kuntar a scholarship and the opportunity to practice. The business major has three in-person classes, one hybrid class split between the classroom and Zoom and one online class.

“Ultimately,” Kuntar said, “I was kind of looking at it from a hockey standpoint, and I thought switching it up would be the best for my development.”