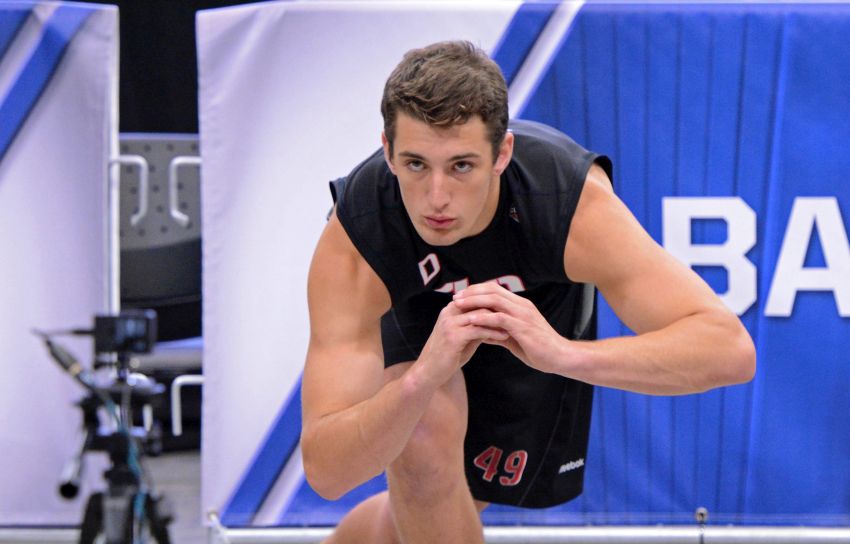 BUFFALO – Right away, Dennis Gilbert understood the offensive style he showcased as a high school star at St. Joe’s and with the Buffalo Jr. Sabres wouldn’t work in the United States Hockey League, the country’s best junior circuit.

So the Williamsville native, the only local prospect invited to the NHL Scouting Combine, quickly revamped his game in 2014-15. The 6-foot-2, 201-pound defenseman embraced the defensive side of the hockey, becoming a more tenacious and well-rounded presence with the Chicago Steel.

“I think my biggest improvement’s been kind of recognizing my new style of play,” Gilbert said Saturday following fitness testing inside HarborCenter.

The 18-year-old has improved so much he could be drafted in the fourth or fifth round later this month. NHL Central Scouting ranks him as the No. 58 skater among North American prospects.

“Because of how his game trended this year, he was someone who rose up as the season went on,” Central Scouting’s David Gregory said. “So if the season had two more months … you could see him continuing to go the right way. So I think the upside for him is really good.”

Gilbert is done with junior hockey, however. He originally committed to Niagara University in 2013 before signing with the University of Notre Dame in late April, fulfilling a childhood dream.

“It was my dream school growing up,” Gilbert said about attending Notre Dame. “I dreamed to play hockey and football there as a 6-year-old kid in Williamsville, N.Y.”

Gilbert, who will major in finance, likely wouldn’t have earned a scholarship without his strong USHL season. The competition, he said, “was phenomenal.”

“Everyone can skate, everyone can play, play physical,” he said. “It’s a great league. It’s the closest to college. That’s why I went there. I think the USHL is a big reason why I’m here today. My teammates and coaches can attest to that as well. I think that it’s the best league in the United States for junior hockey.”

“He has good size and ability, and he is not afraid to use his body and be physical (to) make him a more complete guy, potential two-way defenseman as he develops,” Gregory said.

Gilbert, whose uncle, Mike Gilbert, is the Sabres’ vice president of public and community relations, met with his hometown team during the combine.

“Coming into this I was trying to enjoy the process, you only go through this once, this whole draft thing, the combine stuff,” he said. “I’m lucky enough to be here. I’m just taking it all in and really enjoy the whole process. It was a great time all week.”

While getting drafted would be nice, Gilbert said, it won’t change his mindset.

“I still have to be a great defenseman for Notre Dame,” he said. “I still have to keep progressing, getting stronger, keep upping my game to hopefully make that (jump) from the college to the pro game someday.”