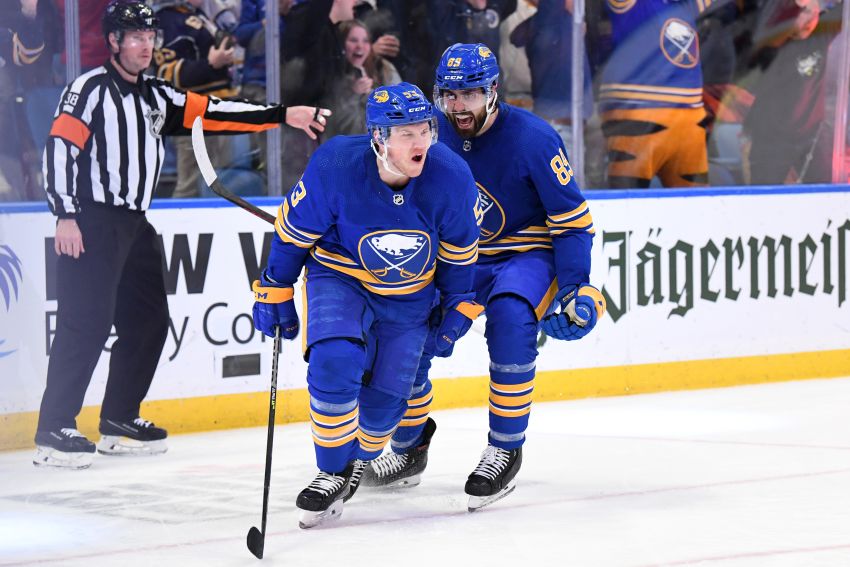 BUFFALO – When the Sabres signed winger Jeff Skinner to an eight-year, $72 million contract, they envisioned dynamic efforts like Friday’s late two-goal outburst in a thrilling 5-4 won over the Minnesota Wild.

After the Sabres blew a third-period lead, Skinner scored twice in a span of 4:40, capitalizing on an odd bounce off the half wall at 12:20 before following his own rebound to the net at 16:40.

Skinner said: “When we talk about sort of trying to find bounces, those are the ones that you remember.”

But Skinner’s seventh outing with at least two goals this season was just one part of the Sabres’ ninth home triumph this season.

Despite losing a late lead and taking nearly 50 minutes to get going – “I didn’t feel we had any rhythm to our game until the last 10 minutes,” Granato said – the Sabres had plenty to like about Friday’s effort before 8,462 fans inside KeyBank Center.

Winger Casey Mittelstadt looked like his old self, scoring his second goal this season. Meanwhile, winger Kyle Okposo scored for the eighth time in 13 games.

And after losing nine games this season in which they’ve led after two periods, they plowed through some late trouble and eked out a win.

“We had quite a bit of adversity with them coming out hard and then regaining the lead in the third period,” Okposo said. “But I thought that we stuck with our game. The best teams in the league, that’s what they do. They never change the way they play.”

The Sabres might finally be learning from their previous failures. Or perhaps not.

“It’s not learning, it’s having it in you that competitive drive in you,” Granato said. “So I don’t see it much as learning. I think that’s almost overused. It’s a friggin’ desire to just not be denied. It’s a will. I don’t think there’s anything learning about it.”

The genesis of Friday’s comeback might’ve been rookie defenseman Casey Fitzgerald fight with the Wild’s Mason Shaw almost mine minutes into the third period.

“We fought getting in sync, but there was a surge after Fitzy battled there by the penalty box,” Granato said. “We played with a different energy at that point, which was what we were searching for the first 40 minutes. … I love the way we finished.”

“Most of the guys would tell you I’m pretty, I guess, proud of Minnesota,” Mittelstadt said of scoring a power-play goal against his childhood team. “So, yeah, that one felt good. I got my parents here and a couple other family members.”

Okposo said: “He wanted the puck tonight, it showed.”

Mittelstadt also wanted contact. In the waning minutes, he kept possession down low, first thumping an opponent as he held the puck behind the net. Then after getting knocked down, he regained the puck.

“You don’t have to look any farther than that shift with three minutes left in the game,” Okposo said. “That sums his game up right there.”

As a frustrated Mittelstadt struggled after returning from another upper-body injury – he has played just 14 times this season – Granato stressed he kept looking better and better each day and would recapture his slick form.

“Just a little more jump, a little bit recovering faster between shifts, able to do more and bring more of the skill that he has to the game,” Granato said of Mittelstadt’s performance Friday. “So he’s just getting better and better each game. Again, he hasn’t played a lot of hockey in 10 months. It’s more that fine-tuned skill is coming back now.”