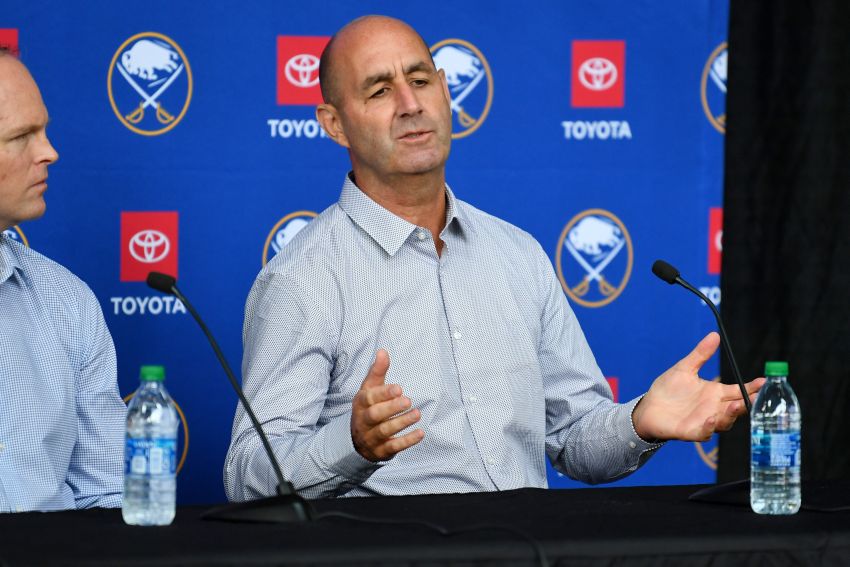 BUFFALO – You had to go back five years and 34 picks to find the last time the Sabres drafted a Russian.

Before they selected winger Prokhor Poltapov 33rd overall Saturday, they hadn’t drafted a Russian since winger Vasily Glotov in the seventh round in 2016.

The Sabres hadn’t picked a Russian high in the draft since 2013, when they took defenseman Nikita Zadorov 16th overall. In 2012, they selected center Mikhail Grigorenko 12th.

Both players struggled before getting traded to the Colorado Avalanche in the Ryan O’Reilly deal in 2015.

So why the sudden run on Russians?

“This was an organizational philosophy to take a closer look at this,” Jerry Forton, the Sabres’ director of amateur scouting, said Saturday inside KeyBank Center after the NHL Draft ended.

Still, Forton said the Sabres did not enter the day thinking they needed to draft several Russians.

“We had a very strong comfort level with a lot of the Russian players on our list,” Forton said. “They’ve all played a great amount of hockey the last two seasons – regular season, playoffs. A lot of international competition over there.”

Forton said the Sabres felt comfortable taking the Russians because Frank Musil, one of their scouts overseas, watched live games in Russia and throughout Europe. The team’s crossover scouts supplemented Musil’s work by analyzing video and analytics.

Forton, general manager Kevyn Adams and others in the organization also watched Poltapov and Novikov in person in the spring at the World Under-18 Hockey Championship.

“We have great video and the analytic data out of the Russia leagues is very advanced and very accurate from our perspective, so all of that gave us a comfort level,” said Forton, who ran his first draft. “We placed the players where we placed them on our list and we had plenty of light moments up there (in the draft room) as another Russian was coming up on our list and it looked like he was going to be the next player on our list.

“Up until our very last pick today, we went straight off our list. I had a pretty good idea a couple of these Russians maybe we were a little bit higher (on) than other organizations, so I had a decent idea that it could fall that way with two or three of them. I did not anticipate it being four, but we’re very happy with the players we got.”

Forton also said the Sabres have emphasized scouting players from the Czech Republic, although they did not select any from the country this year.

Here’s more on each selection the Sabres made Saturday:

The 5-foot-11, 174-pound Poltapov, 18, recorded 25 goals and 52 points in 61 games last season with Krasnaya Armiya Moskva, a junior team in the MHL. He also registered two goals and seven points in seven contests for Team Russia at the Under-18s.

He also played one game for CSKA Moskva in the KHL, Russia’s top league.

“Poltapov is hard, hard skill player,” Forton said. “In the MHL this year, he was number one by a decent major in primary offensive production, which would be goal scoring and first assists. The next closest player would have been Kisakov.

Forton said Poltapov “projects as a power forward in the NHL a couple years down the road.”

“He’s in the KHL camp right now as we speak,” he said. “There’s a good chance he could make the CSKA KHL team this year.

“(He’s a) highly talented playmaker but equally a scorer,” Forton said. “Obviously, he’s very light at this time. … The hope there for sure would be that he can put on some weight, but he’s a dynamic player and he doesn’t have the hardness that Poltapov has. But he certainly has as much of an edge as Poltapov does and very good pushback, which is what won us over.”

“He was a player that I think the second half of the MHL season and the playoffs really emerged,” Forton said. “Got a little more comfortable playing in the harder areas, being a lighter body himself, but a very talented player and another guy that just needs to get a little bigger and stronger.”

Forton said Sardarian played on a line with Poltapov some of last season.

The 6-foot-2, 183-pound Bloom, who’s property of the Saginaw Spirit, did not play last season because the COVID-19 pandemic forced the Ontario Hockey League to cancel its season. Bloom compiled six goals and 14 points in 54 games in 2019-20.

“I play with a lot of speed, whether it be skating or moving the puck fast,” Bloom said on a Zoom call Saturday. “Playing the game at a high pace. I think my hockey IQ is what gives me capabilities to make plays at that high speed.

The 6-foot-2, 205-pound Nadeau scored 13 goals and 45 points in 34 games last season with the Shawinigan Cataractes in the Quebec Major Junior Hockey League.

“I think I’m a power forward with a great hockey sense, work on both ways of the ice, I like to bring energy in the game,” Nadeau said. “I have good IQ, too.”

“He’s just a normal coach who is challenging all the time,” Marjala said. “I don’t see him in that way.”

The 6-foot-4, 190-pound von Barnekow Lofberg, 18, recorded nine goals and 22 points in 26 games last season with Tyringe SoSS, a third-tier Swedish team. He also played two games for the Malmo Redhawks in the Swedish Hockey League and registered seven goals and 21 points in 18 games for Malmo’s Under-20 junior team.

“I use my hockey IQ, (I have a) good shot, passing,” von Barnekow Lofberg said. “So it’s my vision of the game, that’s my strong side.”

The 6-foot-4, 207-pound Novikov, 17, compiled four goals and 14 points in 52 games last season with MHK Dynamo Moskva, where he was teammates with Kisakov. Novikov also recorded five assists in seven appearances for Team Russia at the Under-18s.

The 5-foot-11, 161-pound Kozak, 18, compiled three goals and 11 points in 18 games with the Portland Winterhawks, a Western Hockey League team.

2 thoughts on “Why did Sabres suddenly focus on Russians during NHL Draft?”