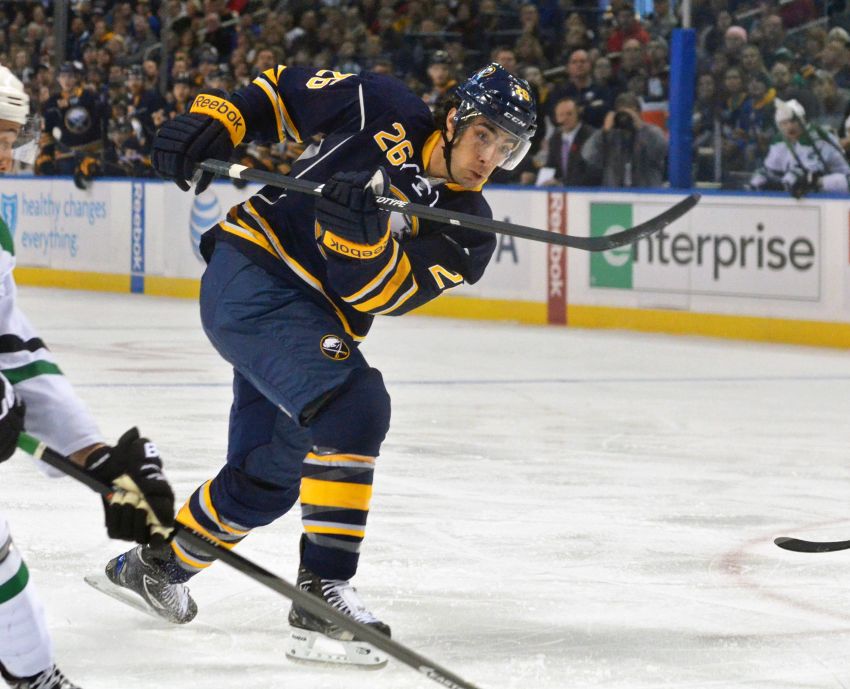 “It’s tough when you lose a guy like that, he’s been my best friend for a while,” Okposo said Monday morning inside KeyBank Center. “He means a lot to me, it’s tough news. But at the same time, it’s a business, he knows that better than anybody.”

It’s a business the hapless Sabres have been failing at for years.

This season, expected to be a year of growth with a new coach and general manager, they rank dead last in the NHL with 16 points. They’ve lost four straight games and 11 of the last 12 entering Tueday’s road tilt against the Colorado Avalanche.

They need to make moves. Moulson going first wasn’t surprising. The graying winger, 34, has zero points and a minus-9 rating in 14 games this season.

To Okposo, removing a popular veteran sends a strong message to the bottom-feeding team.

Sabres coach Phil Housley said he had been discussing the move with GM Jason Botterill for two weeks. As the Sabres practiced without Moulson on Monday morning, the team issued a one-sentence press release saying he would be waived at noon “for the purpose of an assignment.”

Expect more moves as Botterill remakes the team and fixes mistakes from the previous regime. Shortly after waiving Moulson, the Sabres acquired forward Scott Wilson from the Detroit Red Wings.

The Sabres had been scratching Moulson, whose lack of speed hurt him, and playing him sparingly on the fourth line. He played two final games before sitting out Saturday’s 5-1 loss in Pittsburgh.

If Moulson clears waivers today, the Sabres can trim $1.025 million from the salary cap, according to capfriendly.com. They’ll likely assign him to the Rochester Americans. He could have his final season bought out following the year.

Moulson hasn’t played in the AHL since 2008-09, when the Los Angeles Kings sent him to the Manchester Monarchs. After the Islanders signed him to a two-way contract in July 2009, he quickly morphed into one of the league’s top scorers, compiling 97 goals over a three-year stretch.

The Sabres acquired Moulson in early 2013-14 before dealing him to the Minnesota Wild. They re-signed him months later.