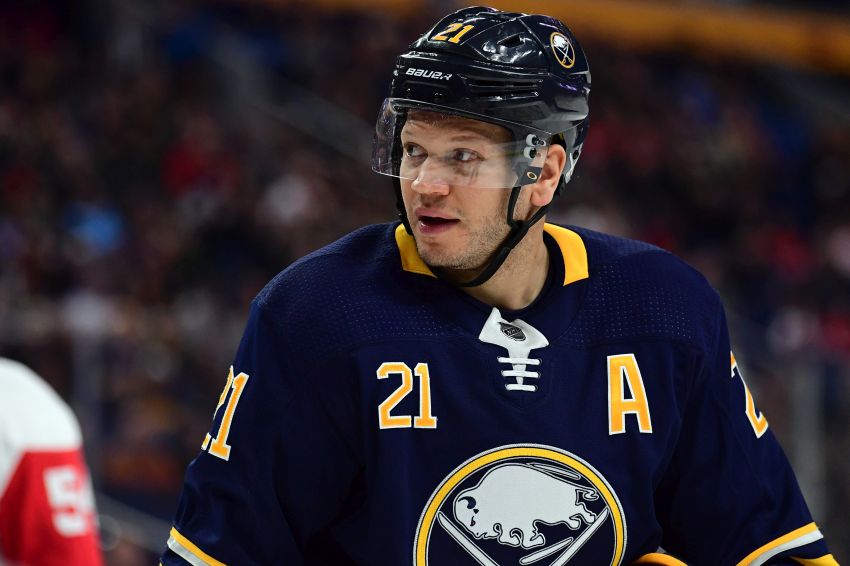 BUFFALO – When Sabres winger Kyle Okposo played on Long Island, the New York Islanders had a saying about their antiquated home rink in Uniondale, Nassau Coliseum.

Well, it was the Islanders’ regular home until 2015, when they left for the sparkling, ultra-modern Barclays Center 24 miles away in Brooklyn.

Barclays, of course, isn’t a hockey facility. It was built for basketball and concerts. Some seats have an obstructed view of the ice. The scoreboard hangs over a blue line.

Fans have stayed away from Barclays in droves. That’s why the Islanders returned to Long Island and the renovated Coliseum – the official name is now NYCB Live: Home of the Nassau Veterans Memorial Coliseum – for 20 home games this season, including their last 10.

One of them happens to be tonight’s contest against the Sabres.

During a five-minute chat Friday inside KeyBank Center, Okposo, who spent nine years with the Islanders, couldn’t hide his excitement about returning to Long Island. He has been looking forward to this Nassau game for a long time.

“It’s a place where I played my first NHL game, grew up there,” he said. “I have a lot of really good memories there. It’s going to be pretty special.”

To Okposo, the Coliseum, which opened in 1972, is hallowed ground.

The Islanders won four straight Stanley Cups from 1980-83. Their stacked rosters loaded with Hall of Famers – Mike Bossy, Denis Potvin and Bryan Trottier are just a few of the legendary names – rank among hockey’s all-time greatest.

“They won four Cups in a row and they really didn’t do anything to the arena after that,” Okposo said. “So it’s like you still have that … rarefied air and rarefied space. You still have that aura, that presence of those Cup-winning teams, because you watch the highlights (from) 1983 and it’s still the exact same barn.”

Thanks to $165 million worth of renovations that took place over 20 months, that barn looks a little different today. The outside, for example, features 4,700 brushed aluminum fins, according to Newsday.

“The seats are right on top of you, (the fans) could blow the roof right off the building,” Okposo said. “Like, it was just loud. Fans were crazy and it was a lot of fun to play.”

When former Islander star John Tavares returned to the Coliseum with the Toronto Maple Leafs on Feb. 28, the building was raucous all night.

Perhaps Okposo will walk to the Coliseum’s Exhibition Hall. When he broke into the league 11 years ago, he often used what he called a “massive space” to warm up.

“Usually there was no lights and there’s like an old staircase there and sometimes it would creak,” Okposo said. “I’d like freak out a little bit. It was just like old. It had those little quirks in the arena like that.”

Okposo said he’s “shocked” the Islanders returned to the Coliseum. When the Capitals won a seven-game first-round series four years ago in Washington, he figured the Islanders’ last game at Nassau would’ve been their Game 6 win on April 25, 2015.

Counting preseason contests, the Islanders will play 68 games at the Coliseum through 2020-21. After that, their new rink in Belmont might be open.

“When we left, we thought it was done and over with,” Okposo said. “We were all sad and we were all like, ‘This is tough,’ because the last game that I played there was Game 6 against the Caps, and if we won Game 7, we were going to play the Rangers. That would’ve been crazy.”

Not surprisingly, Okposo said the move to Brooklyn wasn’t met with excitement.

“It was the old barn, it had that nostalgia, it had that mystique, and you were going to go to this new arena that was built to entertain and wasn’t built for hockey,” he said. “So I think that we were all hoping that something could’ve got done on Long Island. And the fan base is so loyal and so passionate.

“To move to Brooklyn, a lot of the people in Suffolk County, they weren’t going to be able to go to the game in Brooklyn, because it was just too far. It was tough.”

Housley said defensemen Zach Bogosian (upper body), Matt Hunwick (upper body) and Rasmus Ristolainen (flu) are all out against the Islanders. None of them traveled.

“He’s dropped some weight,” he said.