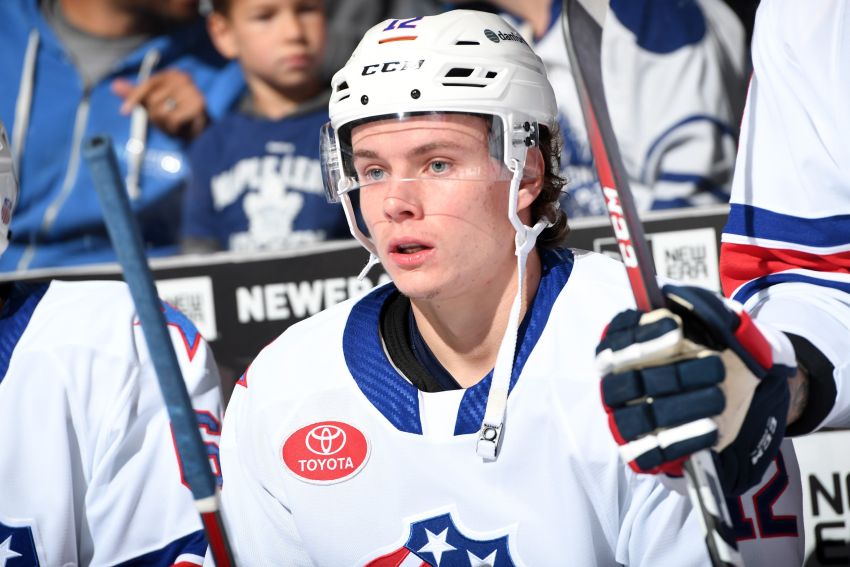 BUFFALO – Rasmus Dahlin has never seen a shot as lethal as the one Sabres newcomer Victor Olofsson possesses.

“He’s probably got the best shot I’ve ever seen in my whole life,” the defenseman said of Olofsson, who will make his NHL debut tonight against the Detroit Red Wings. “It’s unbelievable.”

While Olofsson, 23, was an unheralded seventh-round pick by the Sabres in 2014, he led the Swedish Hockey League in goals a season ago, scoring 27 times in 50 games.

Off the ice, Dahlin said “everyone loves” Olofsson, a slick winger who has scored 27 goals and 60 points, both team highs, in 64 games with the Rochester Americans this season.

“He’s an unbelievable guy,” Dahlin said this morning inside KeyBank Center. “He’s worked so hard. He really deserves to be here. He’s one of a kind. He’s a great guy in the locker room.”

In a dreary season, the Sabres, who have lost 17 out of their last 20 outings, can at least show off some of their best prospects over the final six games.

“I was excited,” Olofsson said of learning about his recall Wednesday. “It’s a dream come true for me. This is what I’ve been working for my whole life.”

The Sabres think so highly of Olofsson he skated at left wing on the top line this morning beside center Jack Eichel and Sam Reinhart and also on the No. 1 power play unit.

“I’m good enough to play up here,” Olofsson said. “This is going to help me out for next year, too.”

Dahlin said: “I’m going to give him the puck on the power play.”

“It’s an exciting time for them,” Sabres coach Phil Housley said. “The youth and energy is going to be important these last games.”

Olofsson has enjoyed a terrific season, ranking among the AHL’s leading scorers since October. Why recall him now?

“You look at our group, especially managing the roster, we wanted to make sure his development was in a good spot,” Housley said. “Obviously, at this point in the season, we’re going to give him an opportunity. But that was part of his developmental plan. It’s good that he had created a lot of good chemistry with his linemates.

Check back later for more on Olofsson and his development.

The Sabres made one roster move this morning, sending winger Tage Thompson to the Amerks. Thompson, 21, was scheduled to join the team for the playoffs.

Apparently, the Sabres want to give the youngster a head start.

Thompson hasn’t played in the AHL since last season. He compiled seven goals, 12 points and a minus-22 rating in 65 games with the Sabres.

Sabres defenseman Jake McCabe, out the last 11 games with an upper-body injury, skated with his teammates this morning and is now day-to-day, Housley said.

McCabe said he wants to practice a couple times before playing. The Sabres have six games left.