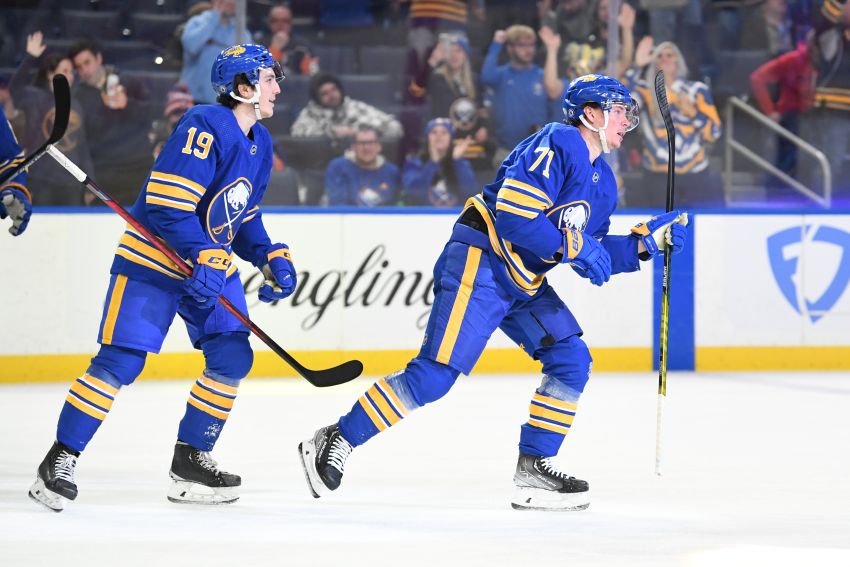 BUFFALO – As Sabres winger Victor Olofsson’s marathon goal drought neared the three-and-a-half month mark, he started watching video to remind himself that, hey, sometimes a slump isn’t quite as bad as it feels.

In the games before he scored the late go-ahead goal in Tuesday’s 6-3 win over the New York Islanders, Olofsson began feeling better about his play. The clips illustrated the Swede has excelled in some areas despite his goal-scoring woes.

“That has helped me these last few games, for sure,” Olofsson said after scoring his first goals since Oct. 31, ending a career-long 30-game drought. “You’ve got to do that sometimes.”

Still, Olofsson, 26, wouldn’t feel like himself until he scored again. After a torrid start – he scored five times in the first eight games – he hadn’t been the same player since a soft-tissue injury sidelined him eight contests in November.

The injury affected his shooting, his greatest asset. He had been tentative and overthinking. The extra split-second he often needed to unleash the puck allowed goalies to catch up.

So when he beat goalie Ilya Sorokin from the right circle with 2:55 left in the third period, putting the Sabres up 4-3, he said he felt relieved.

“It’s been the toughest stretch of my career, for sure,” said Olofsson, who connected on an adroit pass from linemate Peyton Krebs.

How happy were Olofsson’s teammates when he scored?

“I hope someone got the video of the whole bench because we were freaking out,” Sabres winger Alex Tuch said. “It was a huge goal. Not only was it to go ahead, but for Ollie to get that, that was huge for our team.”

“Everyone is really ecstatic for him,” said Sabres center Tage Thompson, who scored a short-handed goal in the second period. “He’s been working extremely hard and obviously he’s been pretty snake-bitten as of late, but now that he has one, I think he’s going to start getting a lot now.”

The trio of Olofsson, Krebs and center Dylan Cozens was terrific all night, generating a Corsi For of 85 percent (11 shots for, two against), according to NaturalStatTrick.com.

Cozens recorded a career-high three assists, while Krebs registered two assists. On a power play in the waning seconds of the second period, Krebs shot the puck, allowing Tuch to bat it out of the air in the slot. It went in with 0.6 seconds left.

“It was chaos,” Tuch said of the moments before the goal. “I heard the bench yelling, ‘five.’ When I tipped the puck I didn’t even think we were gonna have enough time. It was great work.”

Tuch also recorded an assist and has registered seven goals and 19 points in first 16 games with the Sabres.

The Sabres, who earned their 16th win this season, surpassing last year’s meager total, did not flinch.

“We gave up the lead, they scored a goal to tie it up in the third, then our guys elevated their compete, elevated their intensity and desire to win, and that was phenomenal to see,” Sabres coach Don Granato said. “That was exactly what we needed.”

Tuch said responding to the blown lead before the crowd of 9,296 fans inside KeyBank Center was “a growing moment.”

“The energy was a little bit different from previous games that we gave up the lead,” he said. “We didn’t sit back. We didn’t change our game. We said, ‘Hey, you know what, happens.’”

The Sabres have won consecutive games for the first time since Dec. 14 and 16.