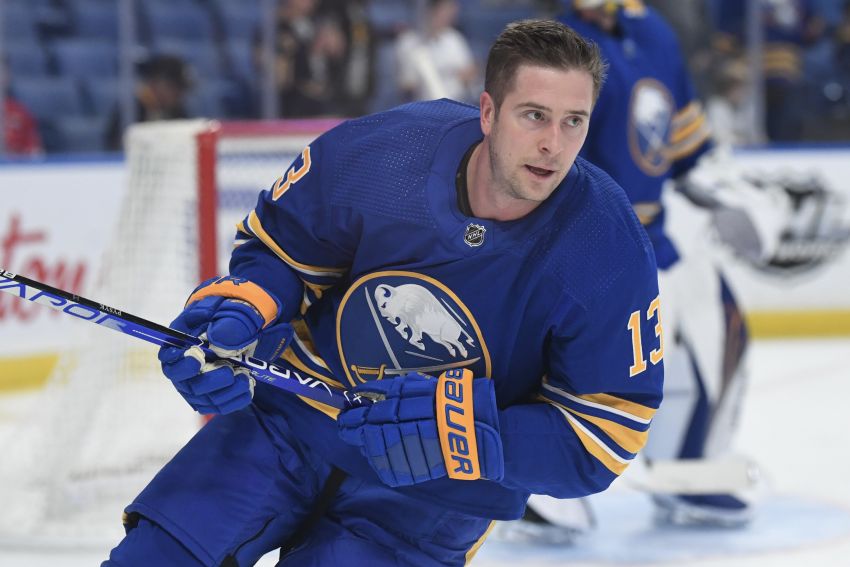 Mark Pysyk has played all 12 games this season. ©2021, Micheline Veluvolu

BUFFALO – Mark Pysyk hasn’t enjoyed a prominent role like this in years. For two seasons, the Sabres defenseman moved around and out of the lineup, often moonlighting as a winger when he wasn’t scratched.

Pysyk, 29, signed a one-year, $900,000 contract to return to the Sabres, in part because he wanted to play defense regularly again. So far, he has played all 12 games this season on the blue line, averaging 18 minutes, 20 seconds of ice time.

That’s almost seven minutes more than last season and his highest average since 2018-19. In Monday’s 5-3 loss to the Washington Capitals, Pysyk moved up beside Rasmus Dahlin and played 22 minutes, 15 seconds, his busiest night since Feb. 26, 2019.

The pair performed strongly together, registering a five-on-five Corsi For of 75 percent.

Coach Don Granato wanted Pysyk, a calm 10-year veteran he said possesses “a real stabilizing personality,” to play a more prominent role on the top pair after the Sabres endured some poor defensive stretches. Defenseman Will Butcher, Dahlin’s partner most of this season, was banged up and missed Monday’s game.

“That was at a premium for us at that moment, to have a little bit more calm,” Granato said of why he promoted Pysyk. “Certainly the defense group was under fire … and Mark has a real calming presence and it showed in the game.”

So Pysyk, a right-handed shot, remained beside Dahlin, a lefty, during Wednesday’s practice inside KeyBank Center and will likely play there again Friday against the Edmonton Oilers.

“When you have a right and a left, everything’s so much easier,” Granato said.

Butcher, a lefty, practiced on the right side with Robert Hagg, Pysyk’s regular partner. Christian Wolanin, who replaced Butcher on Monday, skated as an extra.

Pysyk was sometimes the odd man out over the past two years with the Florida Panthers and Dallas Stars. Granato said he examined video of Pysyk with the Stars last season and liked what he saw.

“And he has become a better player from what I watched last season. And I liked him last season.”

But Pysyk acknowledged getting scratched and changing positions sapped some of his confidence.

“When you’re playing forward, D, getting scratched, you’re certainly not diving into games full of confidence,” said Pysyk, who was drafted 23rd overall by the Sabres in 2010. “You’re kind of gripping the stick tight and playing not to make mistakes, which is exactly the opposite of what Donny’s preaching to us. I think big time that’s helped so far.”

Granato refuses to bench players for one mistake, so Pysyk and others have been playing much looser. Pysyk said Granato has told him he can enhance his game by playing with the puck instead simply making the safe play and chipping it out.

“He just wants everybody to be playing with confidence,” Pysyk said. “That’s sort of his message every day. We’ve had conversations throughout the first little bit of the year and the message has been consistent, the same. He wants everybody in the room to get better every single game, every single practice, and he’s done a great job of building up that confidence in everybody.”

Granato believes the affable Pysyk, who was traded in 2016, appreciates his fresh opportunity.

“You can see that,” Granato said. “He is a guy that has a smile on his face and he doesn’t deter from competing. So he knows his job is to compete and it’s a business and his obligations, but he has a real zest for life, and that is very, very positive for everybody around him.”

Pysyk said he just tries to enjoy his time at the rink.

“It’s gone by pretty fast the last however many years,” he said. “You never know when it could be your last day in the NHL so come in, have a good time. Whether winning, losing, try to make every day leaving the rink like you had fun here. I think that’s the way I’ve done it for the most part.”