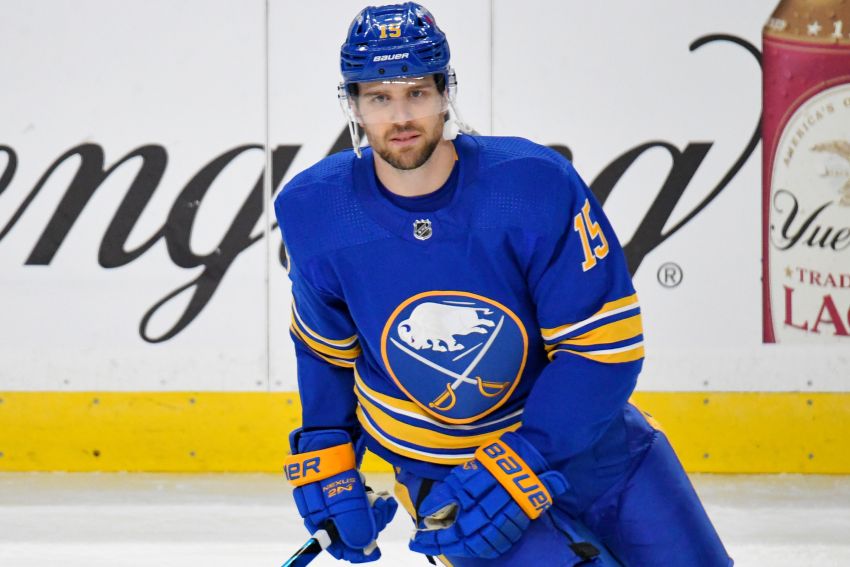 Riley Sheahan signed a one-year contract with the Sabres on Jan. 8. ©2021, Micheline Veluvolu

BUFFALO – The Sabres haven’t found many Riley Sheahan-types – a low-cost role player capable of providing valuable minutes and moving around the lineup – over the past decade.

Myriad factors have contributed to the Sabres’ struggles, and their inability to add depth through trades or free agency ranks near the top of the list.

But the versatile Sheahan, 29, quickly established himself after signing a professional tryout contract to attend training camp. He earned a one-year, $700,000 deal on Jan. 8 and solidified his spot as a fourth-line winger and penalty killer before opening night.

“He does everything right,” Sabres coach Ralph Krueger said on a Zoom call last week. “Like, from the very first day, we just said, ‘This guy’s a pro.’ … He just fits into our culture. He gets the plan.”

Sheahan said the personalities in the locker room – “A lot of character,” he said – help create a welcoming environment for new players.

“It’s just a fun group to be around,” Sheahan said Saturday.

The Sabres, who begin a four-game home stand tonight against the New York Rangers, have performed better than their 2-3-1 record might indicate. Sheahan’s line – he skates at right wing beside center Curtis Lazar and Jeff Skinner – has contributed from the get-go.

The trio has already scored three goals – Lazar has two and Sheahan one – as many as the top line of center Jack Eichel, Taylor Hall and Sam Reinhart.

“Playing with Skins and Lazar, we’ve built some good chemistry,” Sheahan said. “It’s fun, we’ve kind of been feeding off each other out there.”

Sheahan’s line ranks behind two combinations Eichel has centered this season in goals for per 60 minutes with 2.13, according to MoneyPuck.com.

“Lazar’s line with Sheahan … and Skins creating a lot of opportunity just gives you that depth that we need,” Krueger said.

On Friday, Sheahan scored a slick goal by grabbing the puck down low before driving to the net and backhanding the puck. Earlier in the week, he registered the primary assist on one of Lazar’s goals, feeding him a nifty pass in front.

“(Lazar) works so hard and I think he creates a lot of chances from it,” Sheahan said. “In the D zone, he’s so smart. With the puck, he never really gives up too crazy chances. … We’ve been clicking really well.”

Sheahan and Lazar, of course, are used to playing down the lineup. Skinner, however, usually skates on the first or second line.

Despite having zero goals this season, Skinner has showcased strong chemistry with his linemates – he played with Lazar part of last season – and consistently created scoring chances.

“When he has the puck, he’s so dangerous and he creates things out of nothing,” Sheahan said. “So he’s been great. We’re generating a lot of chances and putting some goals on the board. I think when one comes, they’ll all start.”

Sheahan said he has spent about 90% of his NHL career playing center, so skating as a winger has been a new adventure for the veteran.

But the Sabres’ system doesn’t isolate Sheahan, who has won a whopping 72.7% (16 of 22) of his faceoffs this season. The freedom he enjoys on the ice has helped him acclimate to the Sabres, his fifth NHL team in four seasons.

“If I end up in the D-zone first, I’ll act as a centerman and on faceoffs, things like that,” said Sheahan, the 21st overall pick by the Detroit Red Wings in 2010. “So, yeah, it is new. But I think with our system, a lot of it’s kind of just being creative and filling in for spots you see are needed.”

Notes: Eichel has scored zero goals this season despite pumping 23 shots on goal. However, the captain has recorded seven assists and scored the shootout winner in Sunday afternoon’s 4-3 road victory against the Washington Capitals. … The Sabres also play the Rangers on Thursday at KeyBank Center before back-to-back afternoon games against the New Jersey Devils on Saturday and Sunday. … Rangers rookie winger Alexis Lafreniere, the top pick in October, has recorded zero points in his first five NHL games. … The Sabres had Monday off.

One thought on “Versatile Riley Sheahan fitting in well with Sabres: ‘He does everything right’”