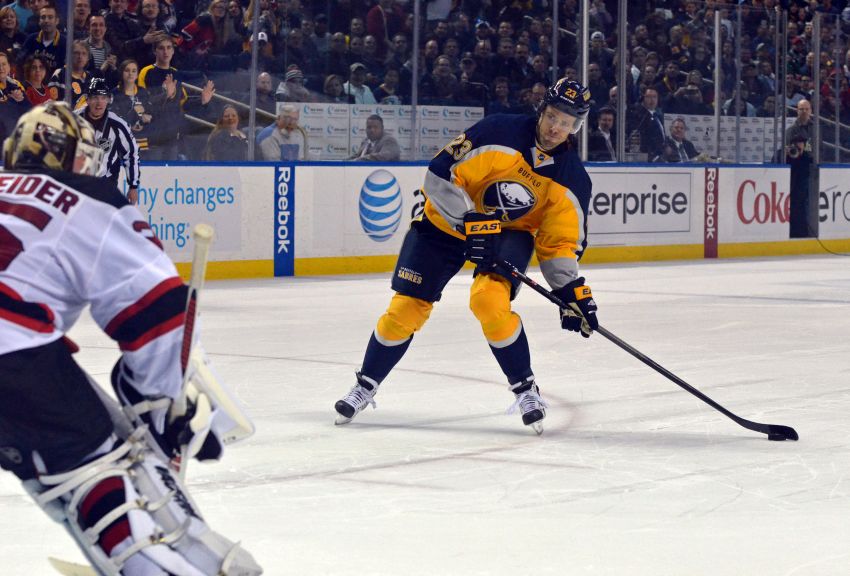 “Watch the crowd go crazy on this one,” Nolan told the winger after sending out Ville Leino, the fans’ No. 1 whipping boy, with a chance to win the game.

Sure enough, instead of booing Leino, who has zero goals in 53 games this season, the capacity crowd of 19,070 fans inside the First Niagara Center cheered wildly.

Goalie Nathan Lieuwen then made a nifty pad stop on Mike Sislo, securing a 3-2 win, the rookie’s first NHL victory.

“I blacked out,” Lieuwen said. “The guy just came in. As soon as I made that save I was just all smiles.”

How did that first win feel?

“It was unbelievable,” Lieuwen said. “One of the most amazing feelings in my life. I’ll never forget it.”

Tuesday’s triumph, just the Sabres’ 21st all season, was special.

“It was pretty fun,” Leino, sidelined by a migraine last game, said about scoring. “Sometimes I miss a little bit of that feeling. But today was awesome. Obviously, we haven’t been winning that much, so it’s tough times. But those kind of moments, you get a little extra energy, extra effort to want to put it in.”

“He played a real good game tonight for us tonight and we were running out of forwards,” Nolan said. “He’s had a tough go. But he’s a real good player. I’m glad to see him get one.”

Indeed, Leino played arguably his best game all season. After starting the night on the fourth line, Nolan promoted the Finn to the top trio beside center Tyler Ennis and Drew Stafford.

Leino’s perfect feed on Ennis’ first goal, his 20th this season, got the Sabres going 1:39 into the third period.

“That’s what’s expected out of him,” Stafford said about Leino.

“Who knows what the fans’ true intentions were for him?” he said. “It was nice to hear them cheer regardless. He’s taken quite a beating this year.”

Incredibly, New Jersey, whose playoff hopes might’ve vanished in the loss, is 0-11 in the shootout this season.

They can partly blame Lieuwen, who made 33 saves in his first home start and third overall.

After some of the 22-year-old’s big stops, including a nifty second-period stick save on Michael Ryder, the crowd chanted “Leeewww.”

Did he hear them?

“I thought they were booing me,” Lieuwen said. “It’s amazing to get that kind of support from the crowd.”

Believe it or not, Lieuwen faced only 10 shootout chances in Rochester all season.

He had a chance to secure the win in the fourth round after Stafford scored. But Lieuwen had to stop the legendary Jaromir Jagr, a 705-goal scorer. The 42-year-old had already played one NHL season before Lieuwen was born.

“I had a welcome-to-the-NHL moment when Jagr came down on me for that one,” Lieuwen said. “A chance to win the game and I think I was a little too excited about what was happening.”

Nolan told Lieuwen on the ice Tuesday morning he wanted to see a greater compete level.

“The one word that Ted keeps using … is compete,” Lieuwen said. “I just went out there and competed.”

Nolan added: “I thought he was really, really good tonight.”

Then Leino’s pass from the left circle hit Ennis near the net.

“He made a pretty ridiculous pass through two or three guys right on my tape,” said Ennis, who also scored in the shootout.

Ennis scored again on the power play 4:41 into the third period.

The Sabres won only their third game when trailing after 40 minutes.

“We got a lot of pride in this room just to finish the year strong,” Stafford said.

Nolan didn’t have an update on defenseman Henrik Tallinder, who left the game with an undisclosed injury.

In what could be his final visit here as a player, legendary Devils goalie Martin Brodeur backed up Schneider. The 41-year-old appeared to watch a replay of Dave Hannan beating him in the fourth overtime of the Sabres’ April 27, 1994 playoff win at the Memorial Auditorium.