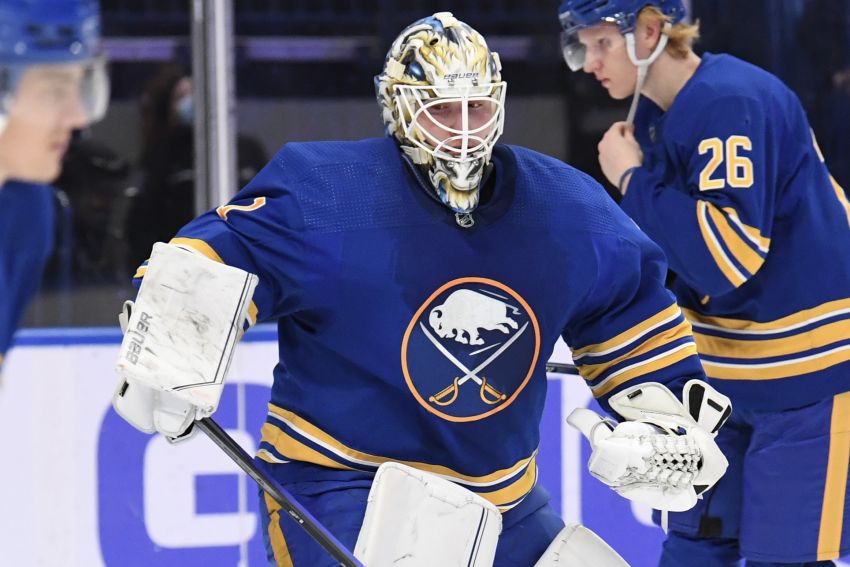 Ukko-Pekka Luukkonen has started seven out of the last nine games. ©2022, Micheline Veluvolu

BUFFALO – In starting seven of the last nine games, goalie Ukko-Pekka Luukkonen has quickly established himself as the Sabres’ backbone, instilling confidence in his teammates and keeping them in every contest.

Luukkonen, 22, was the Sabres’ best player in Saturday afternoon’ 4-3 overtime loss to the Boston Bruins, helping them earn a point despite blowing a two-goal, third-period lead.

“In Boston, I was on my game from the start and felt like I was able to help the team,” Luukkonen said following Monday’s practice inside KeyBank Center.

While making 37 saves against the Bruins, Luukkonen displayed his growing confidence, consistently jumping out of his crease and challenging shooters. At 6-foot-5 and 217 pounds, the Finnish rookie can be an imposing presence.

“In this league, your best players are the reason you’re in games,” Sabres coach Don Granato said following Saturday’s game. “And sometimes your best player’s a forward, sometimes he’s a D. You’re pretty damn happy in this league when it’s the goalie. He played to that level tonight, and … what I was most excited about was how his body language, his confidence.

“He made it look easy. He made shooters look like they had to work harder than he had to work because of his positioning, athleticism and size.”

The Sabres recalled Luukkonen on Dec. 6 because he was their last option. Goalies Craig Anderson and newcomer Malcolm Subban were hurt. Dustin Tokarski was in COVID-19 protocol. The only other healthy netminder, Aaron Dell, had ghastly numbers.

Luukkonen, a prospect labeled as the Sabres’ goalie of the future, looked inconsistent with the Rochester Americans this season. It seemed like he needed more seasoning before graduating to the NHL. He earned AHL Player of the Week honors in November but had a bloated 3.42 goals-against average and a weak .882 save percentage in 12 appearances.

Now, Luukkonen has possibly entrenched himself as the Sabres’ No. 1 goalie for the rest of the season.

Anderson last played Nov. 2 and is listed as month to month with an upper-body injury. Subban has settled into a backup role behind Luukkonen. Tokarski hasn’t played since Nov. 29 and started practicing again last week. The Sabres demoted a winless Dell last month when Subban returned before Christmas.

Luukkonen has looked terrific from the get-go, compiling a 2-3-2 record with a 2.45 goals-against average and a sparkling .927 save percentage. Among goalies with seven or more appearances this season, his save percentage ranked seventh in the NHL entering Monday’s games.

“It’s been a good stretch of games,” said Luukkonen, who noted he has found a rhythm during his longest stint in the NHL. “The more games I get the more comfortable I feel and the more practices I get the more comfortable I feel. You gain confidence from playing well because you know you gave the guys a reason to trust you, a reason to believe that you can win the game for them and help them out.

“Getting to know the guys here gives me confidence and I’m really happy if I’m able to help them and give them some confidence to play as a team.”

Granato said Monday he has watched Luukkonen, who played his first four NHL games last season, grow more comfortable over the last four weeks. In addition to his on-ice exploits, Luukkonen’s personality endears him to his teammates.

“He’s stood tall, he’s welcomed shooters and I think that being able to help your teammates makes you feel good about your game and he’s done just that,” Granato said. “He’s a likable guy. The bench is excited for him. He’s out there, lots of little things that matter for goalies, building those relationships, taking shots after practice and staying out there for guys who want to shoot, even after you had a tough day or a game last night. He does a lot of little things like that.

“He loves being part of a team and I think that’s really helped him in this case. Some great athletes don’t, and that can complicate things behind the scenes and even their development and growth, and with him, he has those intangibles that are conducive to that.”

Winger Alex Tuch, who played his first three games for the Sabres last week, said the consistency Luukkonen has showcased belies his age.

“His poise and his compete is something that’s really surprised me and it’s honestly been really good for our team,” Tuch said. “… He’s been seeing the puck well and over the last (nine) games he’s played, he’s been dominant.”