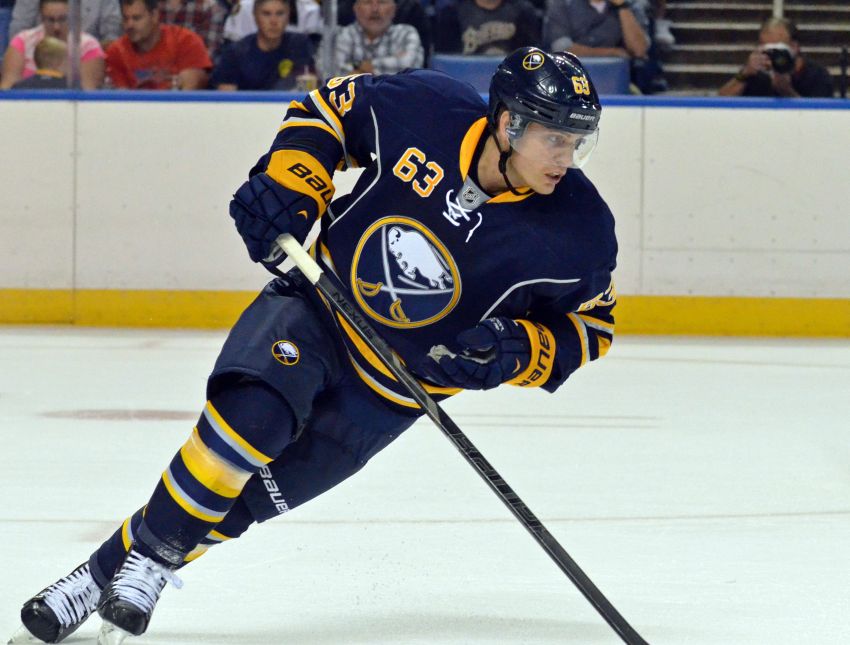 Tyler Ennis is one of the Sabres’ most experienced forwards. ©2013, Dan Hickling, Olean Times Herald

“There’s always stretches,” the pointless Ennis said Wednesday after the Sabres prepared for tonight’s tilt against the Columbus Blue Jackets inside the First Niagara Center. “It’s only been four games.”

Of course, the 24-year-old’s hardly alone right now. Seventeen players on the winless Sabres (0-3-1) haven’t recorded a point yet. The team only has four goals.

But the Sabres are leaning on Ennis more than ever.

Believe it or not, only six Sabres forwards have played more NHL games than Ennis’ 191.

That experience is being reflected in Ennis’ ice time. He skated a career-high 24:27 in Tuesday’s 3-2 overtime loss to Tampa Bay. So far, he’s averaging 19:21 a contest.

As a four-year veteran on a rebuilding team, Ennis is cognizant he has become one of the Sabres’ go-to players.

To be that guy, to be a leader, Ennis is remembering the lessons he learned as a rookie three years ago from Mike Grier, a respected veteran who “was good for every young guy,” he said.

“I’m an older guy,” Ennis said. “I remember when I came in it was pretty crazy seeing guys like Mike Grier and older guys. We don’t have many of the older guys. As a 24-year-old, I have to step up and be a leader. I’m trying to work my hardest every single day and show that as an example.”

Right now, he’s back skating between big wingers Marcus Foligno and Drew Stafford, his linemates from a rollicking run in which he compiled eight goals and 19 points in 12 games at the end of 2011-12.

“They’re a line right now that overpasses and they need more people at the goal,” Rolston said. “They got size. They got skill. They got to do some little things better, but I think that’s going to come.”

If the line recaptures its 2011-12 chemistry – remember, it was broken up twice last season – Ennis is confident his play could jump to an elite level.

At his best, the speedy Ennis is lethal, arguably one of the NHL’s most exciting players.

He’s proven he can produce about 20 goals and 50 points. But he’s never reached that next level. He compiled 10 goals and 31 points in 47 games last season.

“I think when we were going there (in 2012) … it seemed like we were scoring every game,” Ennis said about his line. “I think when you average that out it’s a better season all together. So if we get this chemistry going like we can, I think that’s a huge part.”

“I think we can bring back that same chemistry,” Foligno said. “It’s just little things that we did two years ago where we held onto pucks, and I think that’s what we’re learning again.”

Meanwhile, the pointless Stafford said “there’s no excuse” for the trio to falter.

“We’re getting … the chance to play out there,” he said. “At the same time, though, we’re earning it. Ron’s not going to put you out there if you’re not going.”

Ennis believes the line will “get it back.”

“I think there’s a lot there,” he said. “Marcus looks great right now. Staff’s … confident. He’s going to make plays. He’s going to get it back. I think we’re going to click.”

Ennis added: “I feel really good with this group at center. They’re big on either side of me. So if I come up with speed, there’s a lot we can do with it. … If we have good talent, good size to make plays in the offensive zone, I think it’s a good mix, a good blend, a good chemistry. We can do some damage.”