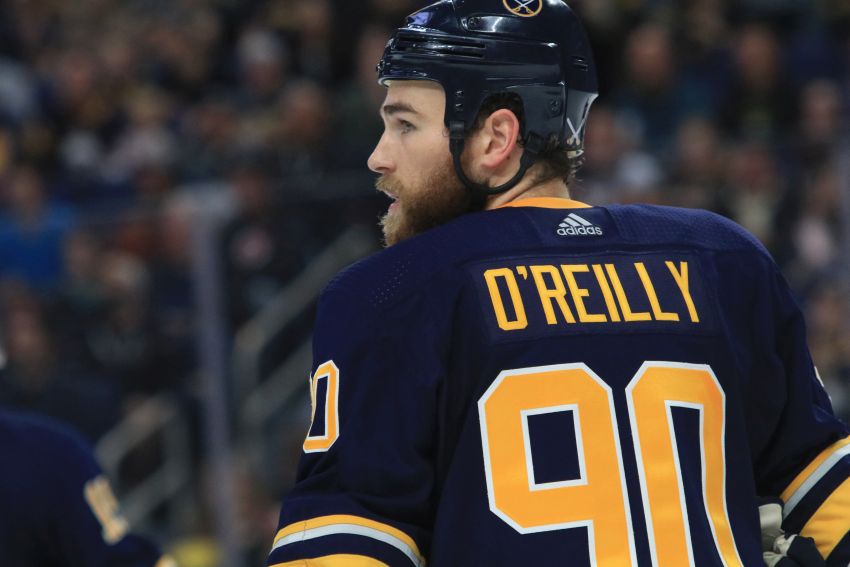 BUFFALO – The trade could go down as one of the worst in Sabres history.

For NHL All-Star Ryan O’Reilly, the Sabres received two overpaid veteran forwards, a prospect who has been in and out of the lineup and first- and second-round picks from the St. Louis Blues, this afternoon’s opponent at KeyBank Center.

The Sabres’ struggles this season can be sliced and diced a thousand ways. But getting rid of O’Reilly on July 1 has kept them among the NHL’s bottom-feeders.

The Sabres dished one of the NHL’s most versatile centers without having any sort of viable replacement. The deal has left a gaping hole in their lineup.

In addition to producing offense – the Sabres have been historically bad scoring goals this month – O’Reilly plays critical minutes and takes more faceoffs than any NHL player.

With captain Jack Eichel suspended for Thursday’s 3-0 loss to the Pittsburgh Penguins, Sabres coach Phil Housley had to use Vladimir Sobotka, 31, as his “No. 1” pivot.

Sobotka, one of the players acquired for O’Reilly, recently ended his 41-game goal drought. He has registered zero assists in his last 18 contests. Overall, he has compiled five goals, 12 points and minus-16 rating in 64 games.

On Saturday in Carolina, Sobotka, who has a $3.5 million salary cap hit, was a healthy scratch against the Hurricanes.

This afternoon, O’Reilly, 28, will return to Buffalo for the first time in the midst of a career season.

O’Reilly has scored 26 goals and 68 points, new highs, and compiled a gaudy plus-22 rating through 71 outings. He was an NHL All-Star again. He has averaged 20 minutes, 55 seconds an outing, one of the highest totals among NHL forwards.

Following a terrible start, the Blues have surged into a playoff spot, going 30-18-4 since firing coach Mike Yeo and elevating Craig Berube. They throttled the scorching Penguins 5-1 on Saturday afternoon.

The Sabres, meanwhile, have been downright awful for months, falling from first overall to sixth in the Atlantic Division since their 10-game winning streak ended.

The constant losing O’Reilly endured throughout his three years in Buffalo beat him down. After the Sabres finished dead last a year ago, he explained how the rough season sapped some of his love for hockey.

To O’Reilly, the Sabres had become “stuck in this mindset of just being OK with losing.”

“I feel too it’s really crept into myself,” O’Reilly said April 9. “Over the course of the year I lost myself a lot, where it was just kind of get through, being OK with just not making a mistake, and that’s not winning hockey at all and it’s crept into all of our games. It’s disappointing, it’s sad.

“I feel throughout the year I’ve lost the love of the game multiple times and just need to get back to it because it’s eating myself up and eats the other guys up, too.”

Those comments, of course, were shocking. O’Reilly displayed more passion than any Sabre in recent memory. He never seemed satisfied and always shouldered responsibility.

Perhaps he wanted to force his way out of Buffalo. Maybe he was just venting.

Whatever the case, his words irked the Sabres fan base.

General manager Jason Botterill said after trading O’Reilly he did not need a change of scenery. He had mentioned months earlier the Sabres needed a significant move to shake them up.

Did the Sabres panic? Did they think O’Reilly’s presence would be bad for business or a distraction? Did O’Reilly not get along with someone?

The deal, which was completed hours before O’Reilly was due a $7.5 million bonus, has paid virtually no dividends for the Sabres.

After compiling two goals and four points in 23 games, center Patrik Berglund, 30, quit the Sabres in December, leaving $12,579,032 on the table. It’s a miracle they don’t have his $3.85 million cap hit for another three seasons.

Berglund and Sobotka seemed like solid veterans who, despite big contracts, could be contributors and improve the Sabres’ depth.

Sobotka could be a buyout candidate following the season.

Tage Thompson, 21, is a former first-round pick who occasionally showcases the talents of an elite power forward. But the raw youngster began Saturday with seven goals, 12 points and a minus-17 rating in 60 games.

Thompson has more healthy scratches (10) than goals. The 6-foot-5 winger might turn out to be a fine player. But he probably should’ve spent this season in the minors.

Would Thompson have stayed in the NHL all season if he wasn’t part of the O’Reilly trade? Probably not.

The deal could eventually look smart. Thompson might develop into a 25- or 30-goal scorer. Perhaps the Sabres nab a terrific player with one of their picks.

But right now, the O’Reilly trade looks brutal for the Sabres.