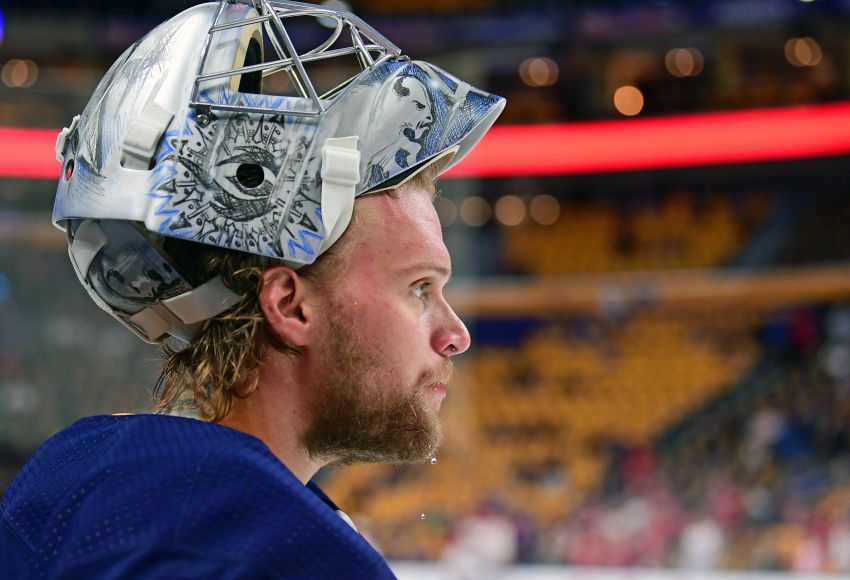 Lehner insisted for weeks he wasn’t worried about his future and wants to stay with the Sabres, something he reiterated Tuesday. But with a wife and two children, “you kind of want to know,” he said.

In the morning, a tweet from someone outside the hockey world – “I don’t know who that guy is,” Lehner said – said he demanded to be traded.

“It’s hilarious this day in age you don’t have to put a source on it,” Lehner said. “It’s not true and I’m happy I’m still a Sabre.”

He added: “I haven’t gotten indications from anyone I’m being … moved.”

Despite the Sabres’ sorry standing, Lehner, like a lot of his teammates, is relieved to be staying put.

“I have no reason not to want to be here,” he said.

Botterill’s words – “The group that we have right now is not working,” he said Monday – should motivate the Sabres, coach Phil Housley said.

“It’s a challenge right now that’s been sent out,” Housley said after the Sabres prepared for Wednesday’s tilt against the Tampa Bay Lightning, the start of a two-game road trip. “I think the guys responded in the right way (by beating Boston on Sunday) after a poor effort in Washington. They came back and played collectively as a team, played for each other.

“I just told them when everybody has their ‘A game,’ we’re going to be in every game. We can’t have one, two or three guys not prepared or not playing up to their potential, because we won’t like the result.”

To Housley, a lot of his players “want to be here for the solution.”

Sabres center Ryan O’Reilly knows even with five seasons left on his seven-year contract, he could be available to another team after the season.

Housley believes the Sabres have a terrific opportunity over the final five weeks. They play 12 contests against teams in a playoff spot or fighting for one.

“Those guys in that room and the coaching staff, we have a lot to prove leading into the summer,” Housley said. “We got to finish the right way. I love the challenge that we’re facing … some tough teams that are trying to get into the playoffs. We’ll really get a good evaluation on our guys.”

Having won only 19 games, the Sabres, of course, haven’t forged any identity over the past five months. That, Lehner said, will be a focus during the final stretch.

“We see it for periods of time, but we got to (do it) consistently,” he said. “When we put solid efforts in, it’s usually close games, we come out on the winning part.”

But the Sabres haven’t cobbled together more than three straight wins since December 2014. Last month, when they rattled off three consecutive victories, it appeared they might finally be turning a corner.

Then they quickly reverted back to their old ways.

“We need to see consistency,” Housley said of the final 19 games. “We’re a team that doesn’t handle success very well.”

Lehner added: “Every game is important to us. It might not be important to other people, but here in this room it’s important. It’s a part of showing you want to be here.”

The Sabres seemed loose during Tuesday’s practice inside KeyBank Center, ending the session with an empty-net goal competition.

“I guess there’s got to be a lot of relief,” Housley said. “Guys want to be here and want to be part of the solution. I really like the energy we had today.”