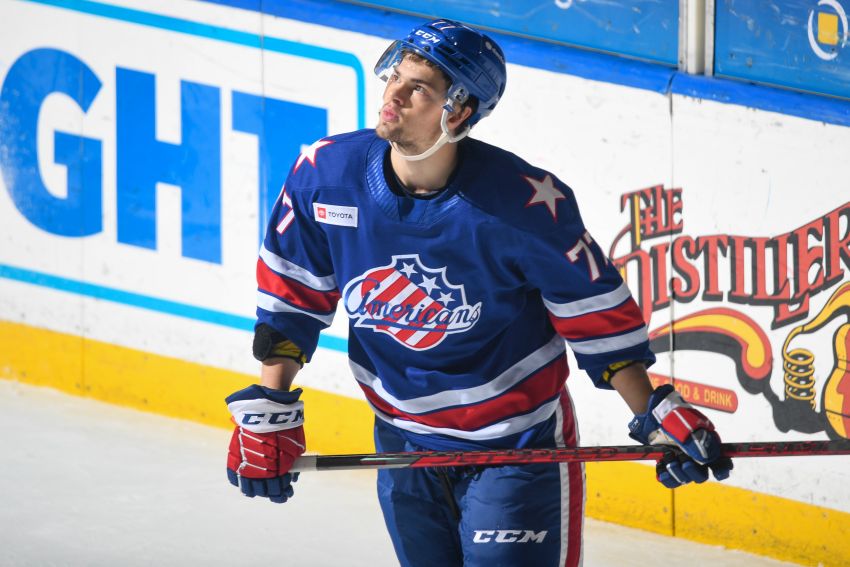 JJ Peterka has been a force for Rochester in the postseason. ©2022, Micheline Veluvolu, Rochster Americans

On Thursday, the Amerks, who eked into the playoffs, defeated the top-seeded Utica Comets 4-2 and clinched the North Division semifinal without their injured captain, Michael Mersch, a 26-goal scorer.

In winning two rounds for the first time since 2004, some of the Amerks’ top talents picked up the slack, performing dynamically.

Krebs and Peterka are tied for third in playoff scoring.

But in the aftermath of the Thursday’s emotional come-from-behind win, the Amerks’ most significant victory in 18 years, coach Seth Appert took time to single out two depth players he added to the lineup for Game 5: Nick Boka and Ben Holmstrom.

Appert lauded Boka and Holmstrom, both of whom sat out the first six postseason games, for their contributions. Boka, a defenseman, skated as a forward and drew the penalty that led to Ruotsalainen’s game-tying goal early in the third period. Holmstrom, meanwhile, won some critical faceoffs down the stretch.

“That just shows what our team’s about,” Appert told reporters in Utica following the game. “It’s not about our stars. Like, yes, Quinner and Peterka, those guys get a lot of fanfare, and they they should, they deserve it. But this team, what makes this team great is the group mentality, the pack mentality, the love they have for each other.

“And to see guys that haven’t even been in the lineup be massive contributors tonight, I thought was very appropriate.”

The Amerks consider themselves an ensemble. Having dealt with significant injuries and recalls during the second half of the season, they’re used to fielding patchwork and lopsided lineups. They dressed 11 forwards and seven defenseman every game against Utica.

Clearly, the reinforcements the Sabres sent the Amerks earlier this month have helped them morph into an elite team.

Krebs might be the AHL’s best playmaker. Defenseman Casey Fitzgerald has recorded two goals and seven points in seven games. He opened the scoring Thursday.

If Samuelsson, who finished the NHL season on the Sabres’ top defense pair, can play against the Laval Rocket in the best-of-five North Division final, he would be a huge addition.

While the Amerks cracked the postseason on the final day of the regular season, Appert said they “never looked at ourselves as a … bubble playoff team.” Around Christmastime, when they had most of their regular lineup, they ranked among the league’s heavyweights.

“We just ran into a 35-game stretch of missing massive pieces in our lineup,” he said. “… But we looked at ourselves as one of the best teams in the league, and now when we got help here, we’ve earned the opportunity to be in the playoffs, we wanted to take the opportunity to show it.”

After scoring 26 goals and 61 points in 45 regular-season games, Quinn has registered just two assists in the playoffs.

Still, Appert believes Quinn, 20, has adjusted to the physical demands of postseason hockey and contributed.

“And that’s part of becoming a great player, because you’re not going to score all the time, you’re going to have the attention on you. And I thought his physical competitiveness and his habits defensively helped us win this series even though the puck wasn’t going in.”

With Luukkonen out with a lower-body injury, Amerks goalie Aaron Dell has started every playoff game, compiling a 5-2 record with a 3.29 goals-against average and an .882 save percentage.

Dell, 33, struggled in Buffalo this season, compiling an awful 1-8-1 record. But he has been critical to the Amerks’ success, winning 17 of his 29 appearances, playoffs included.

“We’ve loved Dell since the beginning of the season,” Appert said. “I know there was the, whatever, his numbers in Buffalo don’t look as good. His numbers here look great. But, yeah, he probably has a little bur in his saddle.

“That’s a proud man, that’s a guy that’s played a lot of time in the NHL, and very well. And I think he does have a little chip on his shoulder, which is important.”