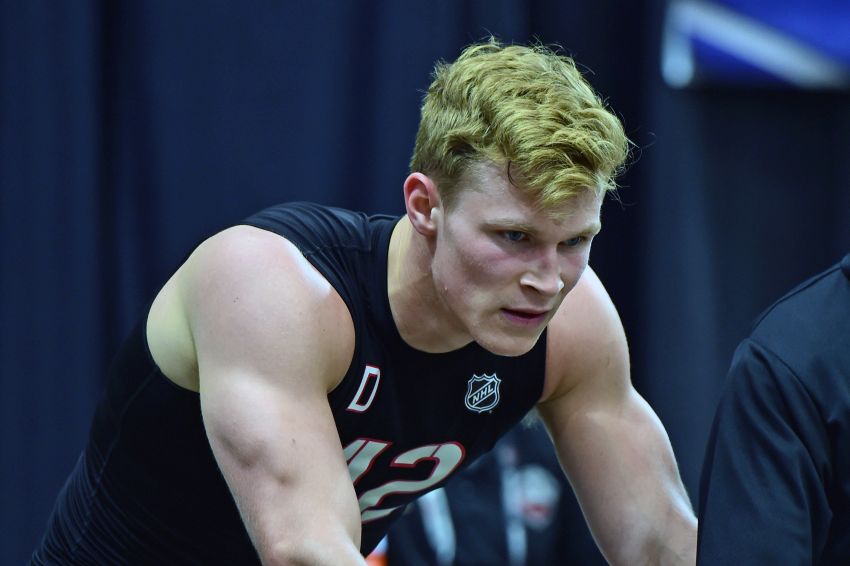 BUFFALO – Growing up in Boca Raton, Fla., Jakob Chychrun’s classmates and friends had little interest in hockey. The 90,000 residents of the Palm Beach County city, like most of the state, mostly focus their attention on football and other outdoor sports.

There was, however, one person Chychrun, a defenseman expected to be selected in the top 10 at the NHL Draft on June 24 in Buffalo, could share his love of hockey with: Kelly Pegula, the youngest daughter of Sabres owner Terry Pegula.

“She was kind of the only person I could talk hockey with at school,” Chychrun said Saturday inside HarborCenter following fitness testing at the NHL Combine. “All my buddies were soccer or football players. It was good to have that familiarity with hockey. I was able to meet Terry and just build a relationship a little bit.”

Yes, Chychrun, 18, is already on a first-name basis with the Sabres’ billionaire owner. Chychrun grew up three miles from the Pegula family and knows them well. Terry and Kim Pegula’s son, Michael, also attended the same school.

The Sabres, who pick eighth, need a left-handed defenseman badly. If Chychrun lasts that long, he would be a very attractive option for them.

Clearly, Chychrun, a star with the Ontario Hockey League’s Sarnia Sting, is comfortable with the idea of joining the Sabres and thinks they’re on the path to the Stanley Cup. People in town have been telling him the Sabres need a defenseman.

“It’s a great hockey city,” he said. “Obviously, they have great ownership here. I’m familiar with them. I think it’d be a great place to play. I think they have a lot of key young pieces.”

The 6-foot-2, 215-pound Chychrun would instantly become one of those key pieces. He’s one of probably three defensemen – Olli Juolevi and Mikhail Sergachev are also highly regarded – teams will likely select early.

Among a bigger group of four or five top draft-eligible defensemen, “there’s no predicting the order because they’re all good, they’re all different in their own way,” said Dan Marr, the director of NHL Central Scouting.

Still, Marr believes Chychrun is the No. 1 defense prospect.

“We’ve kept Jakob Chychrun at the top of our list,” he said. “He’s the real deal as far as we’re concerned.”

Why is Chychrun, who said he’s a two-way defender, the best of a strong group?

“He’s got size, strength, arguably the best skater for a defensemen in this draft, good offensive game at the blue line, strong defensive in his own zone,” Marr said. “Going into this year, teams were looking at how he managed his risk-reward decisions. In his first year he would just get the puck and go. It was a bit of a run-and-gun system there.”

In 2015-16, under a different system from new coach Derian Hatcher, Chychrun adapted and developed into a strong two-way presence and kept producing offense, Marr said. Still, Chychrun, who had offseason shoulder surgery, knows he struggled a bit. A year or so ago, many tabbed him as a candidate to go No. 1 overall.

“I didn’t have the year I wanted,” Chychrun said. “I understand the other two D-men in the conversation had great years. We’ll see how it pans out. I’m not stressed too much about it. I just want to enjoy draft day.”

Chychrun’s, father, Jeff, enjoyed draft day in 1984, getting selected 37th overall by the Philadelphia Flyers. He played 262 NHL games as a defenseman before retiring to Florida because his wife’s family business, which publishes books for the tire industry, is based there.

Jeff Chychrun coached his son growing up, something Jakob believes was “obviously an advantage.” He said his father simply let his players enjoy hockey. Jakob had time off to play other sports, and when he returned to hockey, he found he missed the game.

“I think it made me an athlete, gave me the opportunity to try other things, and ultimately my passion was for hockey more than anything else,” said Jakob Chychrun, who spoke to the Sabres last week.

Chychrun’s also passionate about his talents and work ethic. He believes teams should “feel safe in investing in a guy like me.”

“I’m not going to take no for answer,” he said.

Chychrun, however, said he will go back for a third junior season if his NHL team decides that is his best option. Still, he said his “ultimate goal is to play in the NHL at 18.”