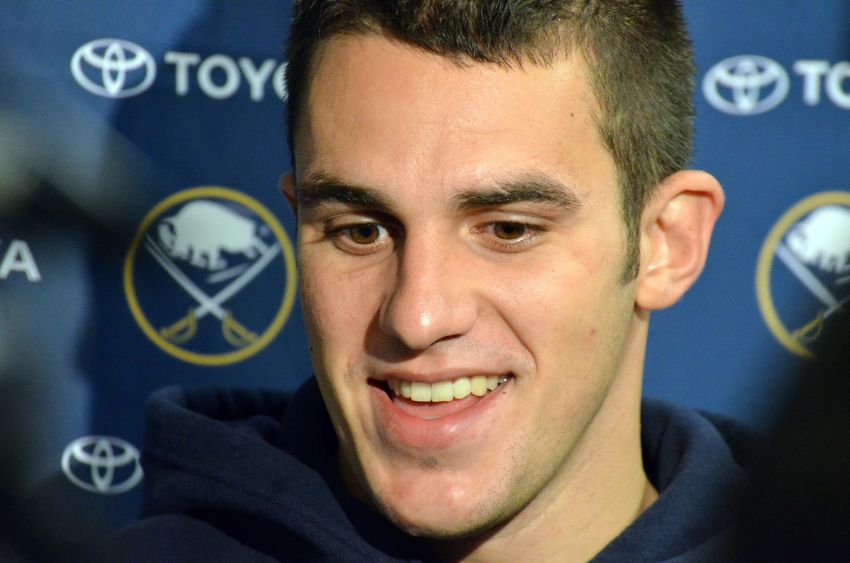 BUFFALO – Seventeen months after Corey Tropp played his last NHL game, the 24-year-old Sabres winger will return to the lineup tonight in Columbus.

Yes, it’s just an exhibition contest. But for Tropp, who suffered ligament damage in his right knee playing for Rochester opening night last season, it’s more than a preseason tilt.

Tropp’s back in the NHL.

“I’d be lying to you if I told you when I finished the season two years ago that it would take this long to get back to another one,” Tropp said this morning inside the First Niagara Center after the Sabres prepared for the Blue Jackets. “So I’m real excited about it.”

Tropp, whose mix of ferociousness and skill earned him a regular spot late in 2011-12, made it back late last season, playing five more games with the Americans.

That made the Michigan native’s offseason a whole lot easier.

“That’s one of the real reasons why we did try to make the comeback, so you’re not sitting around all summer thinking, ‘How’s it going to hold up in that first exhibition game or intrasquad scrimmage game?’ The mental side of it, playing those games helped a lot, I believe.”

Check back later for a full story on Tropp, who will skate on the right wing with Mikhail Grigorenko and Zemgus Girgensons.

Meanwhile, 20-year-old Finnish winger Joel Armia, the 16th pick in 2011, will make his NHL preseason debut on the right beside Tyler Ennis and Johan Larsson.

“He’s really skilled,” Sabres coach Ron Rolston said. “He’s got a big body, strong over pucks, has a lot of offensive skill, and tonight will be a good test with all our young players that we’re trying to get a gauge on, just in a game situation. And for him, it puts him, just like (rookie) Rasmus (Ristolainen) the other night, into a North American building just to see the pace of the game. You have to in this league play a lot of hockey in your shift.”

Here’s the rest of tonight’s lineup for the second exhibition game: