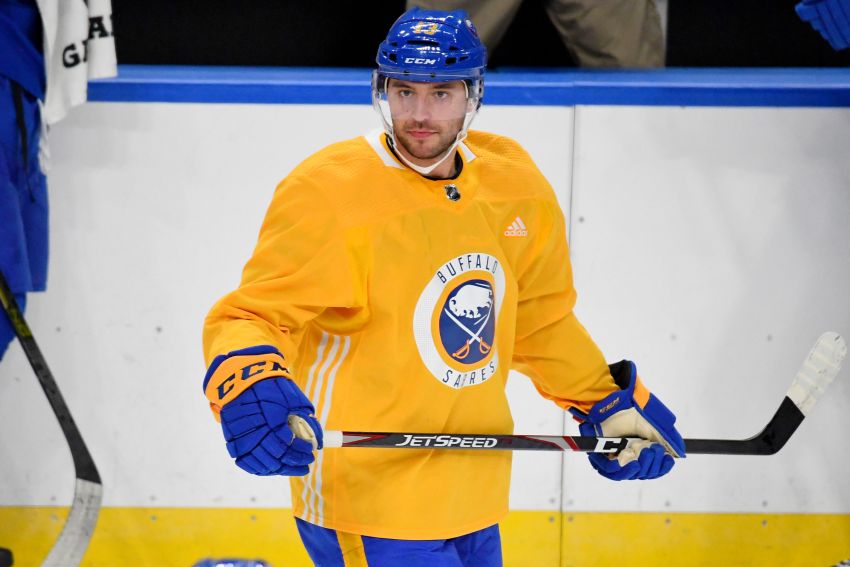 BUFFALO – In the not-so-distant past, losing a player who possessed Zemgus Girgensons’ talents could’ve created a massive hole in the Sabres’ lineup.

In Rieder, a free agent the Sabres signed Oct. 9, the Sabres had someone skating down the lineup ready to assume a bigger role.

“Zemgus was a prime example of accepting the grinding, physical, penalty-killing, sacrificial kind of job and still chipping in on the offense,” Krueger said on a Zoom call last week following a session of training camp. “And we in Toby have that same kind of a player.”

Rieder, 28, quickly seized his chance, scoring two goals in Saturday’s scrimmage. When the Sabres open the season Thursday against the Washington Capitals at KeyBank Center, he will likely be skating beside Eakin on the third line.

“It’s a great opportunity for myself and now I got to showcase and try to stay in that spot,” Rieder said.

The affable Rieder, who signed a one-year, $700,000 contract, clearly feels comfortable in Buffalo. The German has known Krueger for about a decade.

The Oilers drafted Rieder in 2011 when Krueger was an assistant coach with Edmonton. Krueger later coached him when he led Team Europe to a surprising second-place finish at the 2016 World Cup of Hockey.

Rieder learned firsthand then how Krueger’s positive energy can help bring a team together quickly.

“He has really a good character and his speeches are really good,” Rieder said. “It motivates you and it makes you want to do good for your coach. He just has that charisma. He brings it across really well. He kind of helps us grow together even faster.”

The Rieder, who spent last season with the Calgary Flames, possesses a similar personality.

“He’s just an unbelievably positive spirit all the time,” Krueger said. “He just loves the game, he has a smile on his face all the time. As a human being, just a fabulous addition to the team.”

While the 5-foot-11, 189-pound Rieder possesses offensive upside – he averaged 14 goals over his first three NHL seasons – Krueger said he “clearly understands his space in the National Hockey League.”

“His penalty killing is definitely something where he’s embraced that over the last few years,” Krueger said of an area the Sabres needed to address after finishing 30th last season. “(He) is somebody who understands what needs to be done and the sacrificing in the way he gets into shot lanes defensively.”

That mentality has helped Rieder keep finding work – he has played 434 NHL games – as his offense vanished.

Two seasons ago, he hit rock bottom, scoring zero goals in 67 games for the Oilers. Last season, he mustered four goals in 55 contests. He did, however, score three short-handed goals in 10 playoff appearances.

“I’ve always tried to be a two-way guy,” Rieder said. “I really take pride in killing penalties and making it hard on the other team’s top guys. Yeah, I’ve kind of just evolved into a player wherever I’m needed, I’m going out there, I’m trying to do my best and I guess that helped me a lot with my versatility.”

In Saturday’s scrimmage, he showcased his offensive abilities, burying the puck in close before one-timing Eakin’s pass in from the right circle.

“You could see in the playoffs with Calgary with the three short-handed goals that he is a defensive threat to score, and with the loss of Zemgus’ (12) goals, we need other people to step up,” Krueger said. “And we see Toby as somebody that can get into double digits offensively, and when he’s used properly and when he’s confident, he can be an offensive threat, and definitely off the PK always a threat.

“So (he’s) just somebody who under these circumstances will automatically increase in value for us as we move forward.”